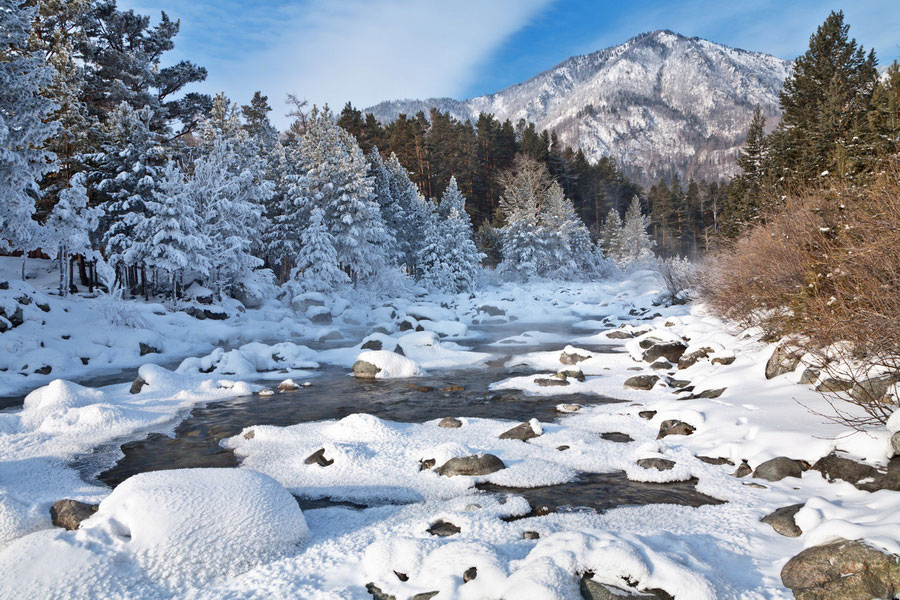 The Sayan Mountains in southern Siberia

Tours, Attractions and Things To Do in Siberia

Siberia is a big region which occupies almost a third part of Russia’s territory. Even so, only 14 % population of the country lives here. And it is quite understandable: the climate here is very inhospitable. But at the same time the local nature is incredibly beautiful. No other place in the world, safe for Siberia, can boast such powerful rivers, fanciful mountain ridges, fathomless crystal pure lakes, immense woodlands, boundless taiga plains, silent arctic deserts …

Siberia is so great, that has not been experienced it all through. That is why Siberia is said to be a land full of mysteries and secrets. First of all Siberia was the homeland for nations, who completely differed from the Slavs by their culture, everyday life, religious cults and traditions. Scythians and Huns were nomads here already in pre-Christian epoch. Later Turkic tribes came from Altai. And after the conquests of Genghis Khan, Mongols came to Siberia. Those unique cultures’ remains can be discovered till our time in the territory of Siberia: in ancient holy places, remote villages, keeping ethnographic color of the natives.

Today Siberia is settled by Russians, Buryats, Tuvinians, Khakases, Altaians, Tatars, Evenki, Dolgans, Nenets, Yakut, Nganasans, Enets, Khanty and Selkup, Shors, Teleuts. Each of those nations, in spite of their paucity is a carrier for its unique culture, which, in its turn, like a patch in the multicolor blanket contributes to the bright ethnic composition of the Siberian region.

Siberia was annexed to Russia much later than the other regions, in the XVI century, after the campaigns of Ermak which opened new lands in the Trans-Urals. Three centuries before the campaigns, Siberia was conquered by the mighty Siberian Khanate, formed after the collapse of the Great empire of Genghis Khan. The epoch of Mongol rule in Siberia ended with the defeat of the Siberian Khan Kuchum. Since then, that rich land became part of the Russian empire. Small forts arose on the territory of the Khanate; they later turned into large cities - Tyumen, Surtug, Tobolsk, etc. Today there are more than 130 cities in Siberia. The largest ones are Novosibisrk, Irkutsk, Krasnoyarsk, Kemerovo, Abakan, Barnaul, Omsk, Tomsk and many other small autonomies.

Besides, Siberia is divided into several region: Buryatia, Tuva, Khakassia, Yakutia and many other small autonomies. Despite all the beauty and originality of this region, tourism in Siberia has only started developing. However, its beauty attracts tourists from all over the world for dozens of years. One of such places is amazingly beautiful Baikal lake which has been listed in the UNESCO World Heritage List, another one is a mysterious Altai, in the territory of which the entrance to the mystical land, Shambhala, is located, according to a popular belief. One more place in exotic Buryatia, and much worthy to visit this amazing region!