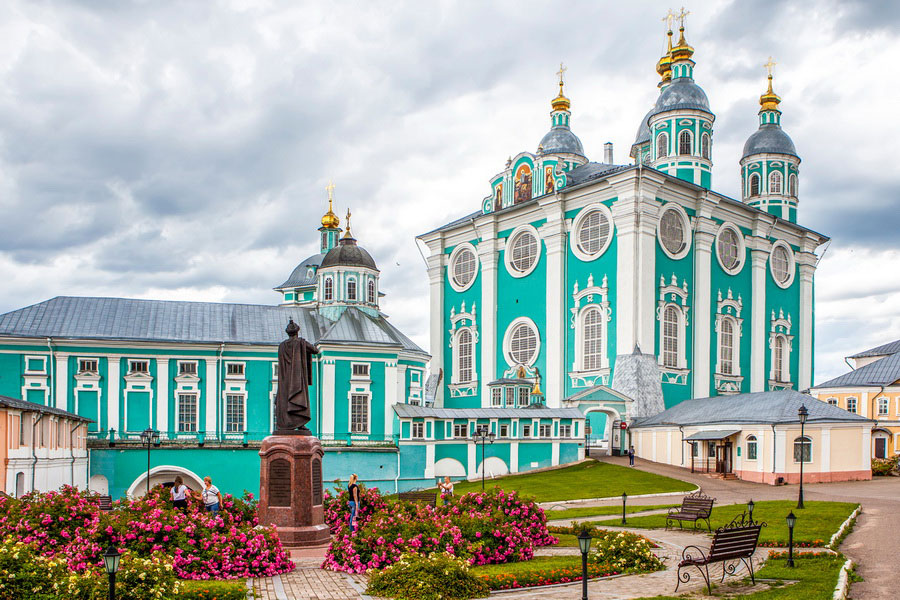 Tours, Attractions and Things To Do in Smolensk

Smolensk, like Moscow, is called “a city on seven hills” with a defensive wall, poetically compared by Boris Godunov with “a necklace of the Russian land”, striking the tourists with the sizes. This city was called a fortress, a key, and a shield; it was even awarded the status of a hero-city for its courage and heroic defense during the Great Patriotic War of 1941-1945. In the past few years, the city has been called “the diamond capital” because the region produces two-thirds of all Russian top quality diamonds. Smolensk, aged over 1150 years, is one of the oldest cities in Russia.

The Smolensk history begins from the year 863, when it was mentioned in the Ustyug chronicles as a well-fortified city - “great in size and in number of people”. Smolensk was founded as a military town and as such it existed for many years, due to its geographical location on the routes from Moscow to Belarus, the Baltic States, the countries of Central and Western Europe. It was believed that who took Smolensk, the last major city in Russia, which was always able to give battle to the enemy, had the road to Moscow opened. So Smolensk was always a shield, a whole fortress - first just in popular rumors, and then developed into the present Smolensk fortress founded by Boris Godunov. The fortress saw a lot of enemies of the Russian state, subsequently passing through, mainly from the West and it always was able to give a fitting rebuff and even failing to withstand the onslaught and being ruined, it repeatedly revived, that is why the Smolensk coat of arms includes a phoenix.

Smolensk is located in the upper reaches of the Dnieper River about 500 kilometers from Moscow. Smolensk, occupying a territory of 166.35 km², stretches for 25 km from east to west and for 15 km from north to south. The climate here is moderately continental, mitigated by influence of the Atlantic Ocean - the winters in Smolensk are moderately cold while the summers are cloudy and often rainy.

The difference in altitude of the seven hills Smolensk lies on, reaches 90 meters, it allows to contemplate a breathtaking panorama of the city from the hills. Smolensk differs from other ancient cities with its special atmosphere - its historical center (called Lenin district) produces an impression of the European antiquity rather than the Russian one. Smolensk is worth visiting, especially the Assumption Cathedral, 12th century churches and city’s center with many extant prewar buildings. One of the main events here is an annual reconstruction of the events of 1812, taking place in early August on Valutina Mountain. People from many cities and countries come not only to watch the reconstruction, but also to take part in it. Furthermore Smolensk is a birthplace of cosmonaut Yuri Gagarin, the first man who made a space flight.

The Russian capital offers three options to get there: by Moscow-Smolensk deluxe train, by bus or by car. Smolensk has quite a few hotels for every taste and purse, while the ones in its picturesque suburb may be a good alternative. Smolensk is especially beautiful in spring, when the chestnuts and lilacs are blooming, wind blowing white petals of apple and pear trees over the city, and the air is filled with the sweet smell of bird cherry. Smolensk is also good in summer, when it becomes elegant and green and you can do not only the city itself, but also visit Smolensk Lakeland.