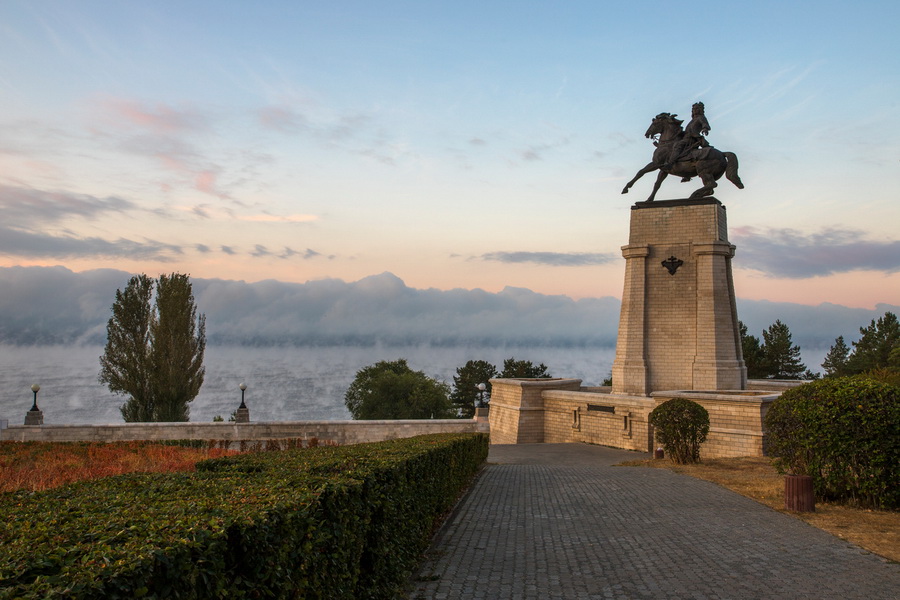 The sculpture of the city’s founder depicts a man sitting on a horse, and proudly looking at new Togliatti. He reach his hand out toward the old, flooded Stavropol’s side, thereby symbolically uniting the city’s past and present time. The monument to Tatischev is established on the observation area from which amazing views to Volga are opened up.

At the crossing of the South Road and Lev Yashin street the Monument of loyalty is set up: a dog sits on the bronze pedestal. This modest monument has not appeared here accidentally, it was an absolutely real dog, which had been waiting for its owner’s car on the same place for 7 years. This dog’s story has become the city legend: the dog’s owners tragically had died in an auto accident, but the dog could not accept its loss and settled down on the roadside. With a joyful bark he greeted every car which was going by. The citizens called the dog “Constantine” what means “loyal, faithful”, and after its death the monument to dog’s faith and loyalty was established on this place. The pose of the dog expresses the expectation, it is looking into the distance, towards the road where it had been waiting for his owners for seven years.

In summer of 1870 a young artist Ilya Efimovich Repin arrived at Stavropol with his friends. They stayed in a small house in Posadkaya Street. When the town was removed the house was also transferred to Deputatskii Street. A memorial board has been placed on the house as a mention that the great artist was in this town.

The architectural peculiarities of this chapel are its white-stone walls, the golden dome which radiantly shines under the sun, the colorful stained-glass windows, the original ornamented tiles, made in very light colors – all that makes the Christmas Chapel the attraction of Toglaitti city. There is the Icon of Jesus Birth at the entrance of the chapel.

There is a lovely Avenue of Beloved near the monument to Vasilii Tatishev. It is the city’s new place of interest, which appeared only in 2006, but immediately caught the fancy of town dwellers. The newly married couple set granite stones with their names and date of their marriage here, on the bank of the Volga.

The status of the auto capital promoted the opening of the AvtoVAZ Technical Museum on 7 September 2001 in this city. It is placed on the area of 38 hectares, where 450 large and approximately 3 000 small-scale exhibits are placed. You can see there the samples of military cars of the First and Second World Wars, lorries and cars of the modern time, both Russia and abroad, exposure of automobile industries. The museum is developing and extending, the quantity of exhibits and the museum’s square will be enlarged.