Cathedral of the Transfiguration, Torzhok 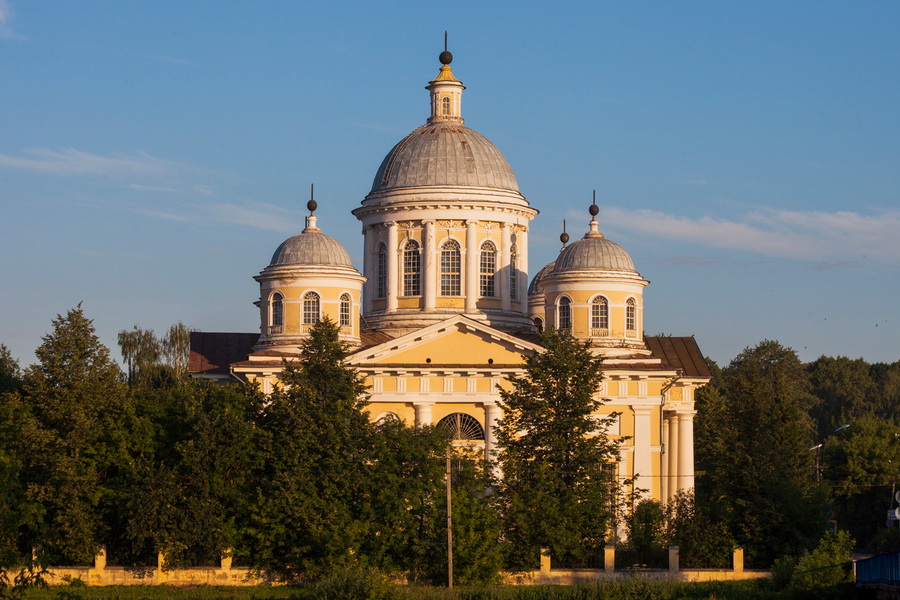 Cathedral of the Transfiguration in Torzhok, Russia, is a graceful five-domed church reflective of the neoclassical architecture prevalent in the 19th-century Russian Empire.

The cathedral was built in 1822 along the scenic Tvertsa River by Italian architect Carl Rossi, best known as the mastermind behind many Saint Petersburg palaces of his day. The location was not chosen randomly, for the site has been regarded as holy by the Orthodox church ever since a chapel was first constructed on the spot in 1364. Although the original wooden Church of the Savior was razed by the Tatar-Mongols the following century, the location retained its revered status. Twenty years after the construction of Transfiguration Cathedral, a similar one-domed Church of the Entrance of the Lord Into Jerusalem was added to the small complex.

Up until the early 19th century, Cathedral of the Transfiguration actually consisted of three churches and a bell tower. Historical records indicate that local nobles and merchants did not skimp on funds for the construction and decoration of the complex, known in its day to be particularly luxurious. Sadly, during the destruction and looting of Transfiguration Cathedral in the 1930s, none of its opulent interior was spared. The churches were shuttered, the bell tower demolished and the holy relics lost.

Although Cathedral of the Transfiguration in Torzhok and the corresponding Church of the Entrance of the Lord Into Jerusalem are currently closed to visitors as they undergo renovation, guests to the city can still admire the exterior. The unique appearance of the bright and beautiful cathedral, with its Doric porticos and five elegant shades of delicate blue roofing, stands out among the city’s many attractions.