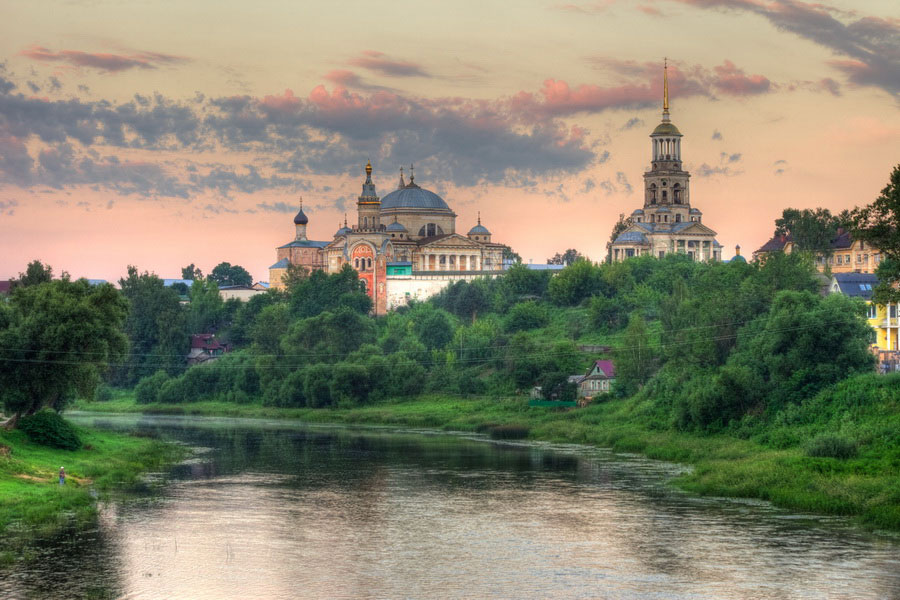 Boris and Gleb Monastery on the banks of the Tvertsa river

Tours, Attractions and Things To Do in Torzhok

The ancient city of Torzhok, Russia is more than a thousand years old, having been founded by Novgorod merchants in the 9th-10th centuries. Torzhok is located on the banks of the Tvertsa River in Tver Oblast, and is best known for its long history in trade and its finely preserved collection of 18th-century cathedrals and mansions.

At one time Torzhok was a lively city, with some five thousand residents registered in a 14th-century census. Most of these were merchants selling bread, flax, honey and the like. Torzhok brimmed with gold-embroidered products which tempted guests and, if legend is true, Catherine II ordered 300 beautiful girls be brought to the city to learn gold embroidery. Today, Torzhok is the only city in Russia where the craft of metallic thread sewing is still commonly practiced .

For a time, Torzhok was known as Noviy Torg (New Market). Its rapid economic development coincided with the blossoming of the Novgorod Republic in the 12th-15th centuries. In reference to this time of prosperity, some residents of Torzhok still call themselves “Novotori”. Various historical artifacts have been unearthed in Torzhok, which has the third-largest collection of birch bark letters in Russia. Many of the messages were written by ordinary citizens and provide glimpses into the advanced literary and social norms of the city during the Middle Ages.

Due in part to its strategic position as a gateway to powerful Novgorod, Torzhok was decimated many times, most notably by the Mongols in the 13th century and by the Poles in the early 17th century. As evidence to the resiliency of its citizens, however, the city always managed to rebuild.

Torzhok owes its current name (derived from “torg”, the Russian word for “bargaining”) to the ancient grain trade which passed through the city from Novgorod on its way to St. Petersburg. The route, which included cargo on Torzhok’s section of Tvertsa River, was deemed so important that Peter I ordered a system of canals be built to ensure the supply remain constant. Torzhok also formed an essential link in the waterway connecting St. Petersburg with Moscow. Later, a road linking Russia’s two main cities also passed through the town.

The Golden age of Torzhok dawned in the early 19th century, at which time famous Russian architects beautified the city with unique buildings on par with the finest St. Petersburg architecture. Many of the cathedrals and manors reflect the neoclassical architecture popularized during the reign of Catherine the Great, and it is now one of the best towns in Russia for appreciating well-preserved architecture of the late 18th-early 19th centuries.

Today, Torzhok is a major hub for the manufacture of railway wagons and is home to the only plant in Russia which produces firefighting equipment. One of Russia’s key flax production centers is also located in Torzhok District. The city sprawls along both banks of Tvertsa River and is connected in the center by two bridges, one for cars and one for pedestrians. A suspension bridge leads to the main shopping area, where government offices are also located.

Torzhok still has a gold embroidery factory where, among other things, Russian flags and coats of arms are sewn. The factory grounds include the Goldwork Embroidery Museum and a shop where products can be purchased.

The real allure of Torzhok, however, is in its old city charm. Its left bank between the two bridges is lined with three-story mansions from the 18th century. Above them looms a small hill where the 18th- century Church of the Entry of the Lord Into Jerusalem stands watchful guard over the town.

From the embankment you can continue toward the boulevard, a favorite strolling spot for 18th-century residents which is also built up with mansions from that time. From the boulevard, head to Ilyinskaya Square and Ilyinskaya (Elias) Church of 1822, which briefly housed the body of Alexander I. Next to the church is a bell tower offering great city views.

Other places of interest include the former city prison and Putevoi Palace (Travel Palace), built in 1777 and rebuilt in the 19th century. Fans of Russian literature will love the ruins of Pozharsky Hotel, where Pushkin and other famous novelists once lodged. In the hotel restaurant, the recipe for the famous Pozharsky cutlets, immortalized in the writings of Pushkin, was first invented.

When it comes to the number of cathedrals in town, Torzhok could easily compete with Suzdal, for there are no less than 22 churches present. Almost all of them are located on the right bank of Tvertsy River, where their silhouettes play an integral part in the calming city landscape. Of special note are Boris-Gleb Monastery, Church of St. George the Victorious, Spaso-Preobrazhensky (Transfiguration) Cathedral, Mikhailo-Arkhangelskaya Church and the wooden Spaso-Voskresenskaya (Ascension) Church with Resurrection Monastery.

Also on the right bank of Torzhok is the Rotunda, built in 1783 on the model of the Roman Pantheon. Next to it stands a bust of its creator, Nikolay Lvov.

Torzhok, Russia stands ready to welcome visitors with a laid-back, classic charm that is hard to resist.