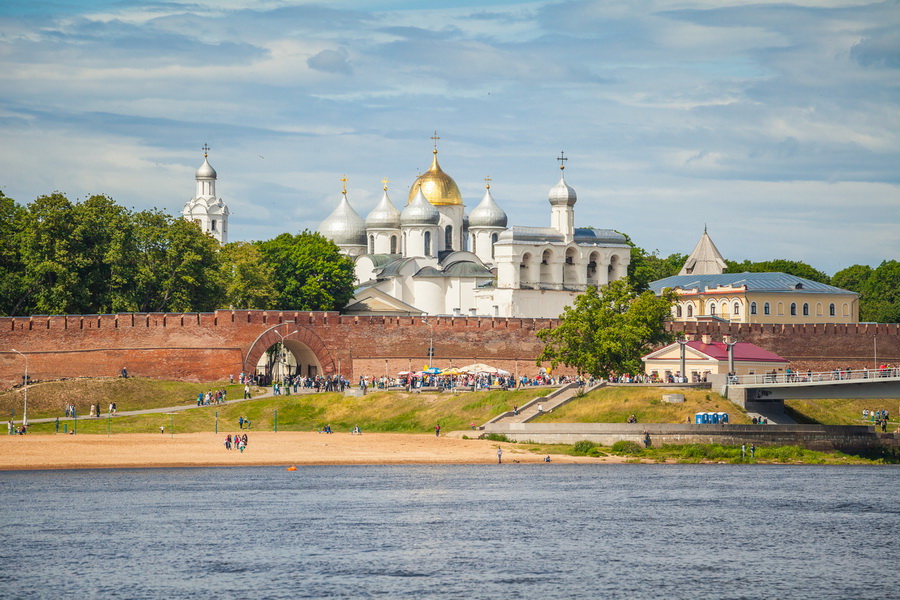 Novgorod Kremlin in Veliky Novgorod, also known as Novgorod Detinets, is the oldest Kremlin in Russia which stands as one of the finest examples of Russia’s medieval military architecture. Located along the Volkhov River, the Kremlin complex is now a UNESCO World Heritage Site that includes the historic St. Sofia Cathedral, a famous belfry and a dazzling collection of medieval jewelry housed inside the gothic-style Chamber of Facets.

The beginnings of Novgorod Kremlin, much like that of Veliky Novgorod and Russia as a whole, is shrouded in mystery. The first known reference to Novgorod Kremlin dates to 1050 and attributes its construction to Prince Vladimir Yaroslavovich, the son of Yaroslav the Wise. In those days, local bishops were responsible for overseeing the Kremlin, and in the era of the Novgorod Republic (12th-15th centuries) they were even known to reside at the fort. Interestingly, the Novgorod princes themselves did not live in the Kremlin and would only gather here on occasion.

Novgorod Kremlin began to acquire its modern appearance after the reunification of the Novgorod Republic with the Grand Duchy of Moscow in the late 15th century. While the princes supervised most of the Kremlin’s construction, it was the archbishops who built the gate churches and replaced the original wooden ramparts with robust stone walls.

Renowned Italian architects and German designers were charged with the task of renovating the fortress in the early 1500s. One of the first Russian fortresses to be rebuilt with red brick, Novgorod Kremlin served as a model for many future citadels. The Kremlin’s towers have several tiers in which rifles of varying calibers could easily be positioned, and the upper tiers also allowed for a clear view of the surrounding area. By the time renovations were completed in the 1530s, the outer walls ranged in thickness from 3.5 to 6.5 meters and in height from 8 to 15 meters. They formed an irregular oval around 12 defensive watchtowers, of which 9 have survived to our day.

During World War II, Novgorod Kremlin and the whole of Veliky Novgorod suffered extensive damage. Restoration work commenced immediately after the war and continues even to this day.

Chamber of Facets (Episcopal Chamber) is one of the more distinct buildings of Veliky Novgorod Kremlin, a 15th-century construction best known for its Western European Gothic style. A distinct red-brick building topped with a red roof, its patterned bricks were all fashioned by hand. Due to the unusual Gothic ribs which distinguish its massive vault, the chamber received its current name, "Chamber of Facets", in the early 19th century. Portions of the original frescoes have been preserved, in one of which the image of St. Sophia Cathedral, now a symbol of Novgorod Kremlin, can still be seen. Faceted Chamber has witnessed many historical events: Novgorod’s bishops, one of whom was involved in the Kremlin’s construction, once lived in the hall, and it is presumed that the decree of the Grand Duke of Moscow regarding the reunification of Novgorod with Moscow was read out in its front chamber.

Chamber of Facets now houses a fascinating museum which holds a treasure trove of old jewelry and other lavish items from historic Russia. Marvel at the hundreds of creations which were fashioned from precious metals, porcelain, wood and glass by Byzantine, Russian and Western European craftsmen, including 12th-century articles from St. Sophia Cathedral. The exhibits are spread across several halls and showcase the talent of Novgorod’s artisans while serving as visual reminders of the dramatic history of Veliky Novgorod.

St. Sophia Cathedral, the oldest surviving stone church in Russia, is nearly as old as Novgorod Kremlin itself. Built by order of Prince Vladimir and consecrated in 1052, this five-domed church gave rise to the local saying "Where Sofia is, there is Novgorod".

On the walls of St. Sophia Cathedral are the remnants of its original 11th-century frescoes which are now regarded as valuable relics of Russian Orthodoxy. Under the paintings is the famous 12th-century Maagdeburg Gate, the cathedral’s main entrance that is admired for the advanced blacksmith’s skills which it displays. Two historic iconostases - Sophia the Wise and Miraculous Sign of the Mother of God - appear in simple, inexpensive frames, the latter dedicated to "the salvation of the city in 1170 when surrounded by the Suzdalians." St. Sophia Cathedral also holds a richly decorated wooden prayer niche that belonged to Ivan the Terrible and a six-tiered bronze chandelier donated by the ruler Boris Godunov in 1600.

Near St. Sophia Cathedral is a belfry which includes a collection of large bells near its western wall, a pitched roof with a domed top and an observation deck offering wonderful views of the area. Although the belfry’s date of construction is unknown, it underwent 15th-century restoration works along with the rest of the Kremlin. The second floor of the belfry now houses the Ancient Bells of Veliky Novgorod Exhibition, a collection of 16th-17th century chimes which range from a 24-kilogram bell to a massive bell weighing almost 320 kilos.

Other notable structures of Novgorod Kremlin are the unique 19th-century Millennium of Russia Monument, Eternal Flame and several churches. In addition to these historic structures, the cultural life of modern Veliky Novgorod is also concentrated around Novgorod Kremlin. Philharmonic Concert Hall, Novgorod Regional Universal Scientific Library, a music school and Children's Museum Center are all within walking distance of the Kremlin.