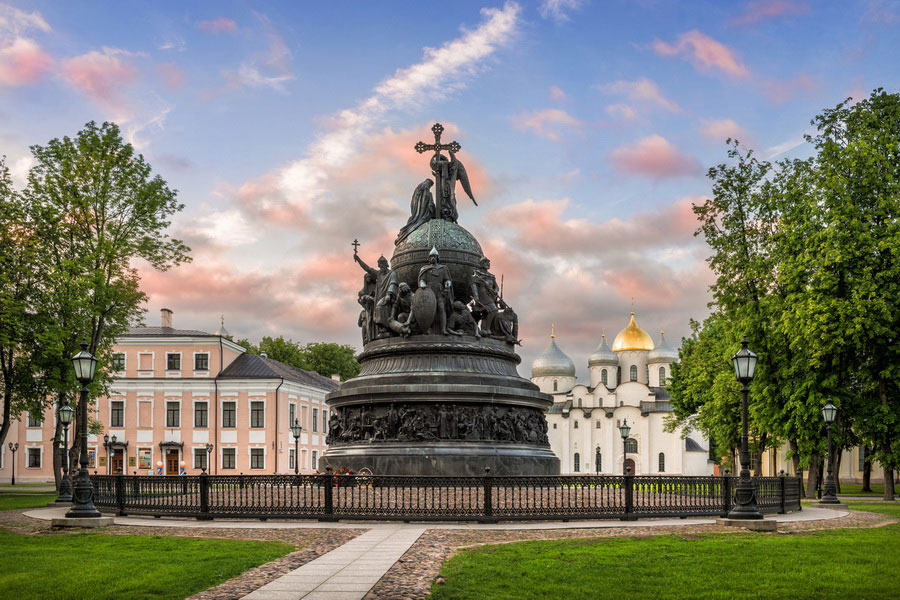 Tours, Attractions and Things To Do in Veliky Novgorod

Novgorod the Great (or “Veliky Novgorod” in Russian) is one of the oldest Russian cities, first mentioned in 859 AD. The city is located on the Volkhov River, which outflows from the Ilmen Lake. By the 9th century, Novgorodians invited a Viking chieftain, Rurik, to govern as their Duke. Finally Duke Rurik became the founder of the Russian state, and the Rurik dynasty was the ruling dynasty of Russia up to 1598 AD.

By 862 AD, Novgorod became the first capital of Russia, which later was moved to Kiev by St Vladimir the Great.

Before becoming Kievan Grand Dukes, both St Vladimir, the Baptizer of Russia, and his son Yaroslav, who later was nicknamed “the Wise”, were the Dukes of Novgorod.

After the collapse of Kievan Russia (or “Kievan Rus”) in 1136, the Novgorod Land became a Feudal Republic untill 1478 AD, when Novgorod was annexed by the Moscow Tsarsdom.

In times of the Republic, the Novgorodians elected a new “Lord”, and his term depended on the people’s confidence and the quality of his governing. Then, the highest legislature and judicial authority was Assembly (so-called “Veche”, where questions of domestic and foreign policy, the elections of “ministers” were decided), with an Archbishop as its chairman.

The majority, if not all, population of the Republic was educated. The numerous birch bark documents (business and love-letters, culinary recordings, biblical commentaries, commercial calculations, written by scholars, priests, children and women), have been found in archeological digs within the city’s territory.

The Novgorod Republic didn’t suffer from the Mongol invasion and was the only one, amongst of the Russian principalities, which remained independent.

Veliky Novgorod had played a big role in the dissemination of culture, literacy, the development of Russian architecture, painting and applied arts.

By the beginning of the 18th century, Novgorod had become an international shopping and trade centre, due to its geographic location on the trade route “from the Varangians to the Greeks” (from the Baltic states and Scandinavia, eastward and through the Volga region to the South). The Novgorodian commercial trade spread from the County of Flanders and the Hanseatic League toYugra Land, from Scandinavia to Hajji Tarkhan and Constantinople.

In our days, Novgorod is the administrative and industrial centre of the Novgorod region.

The title of “The city of Military Glory’ was bestowed to Novgorod by the Russian Government in the year of 2008. There are a number of the UNESCO World Heritage Sites in the city.