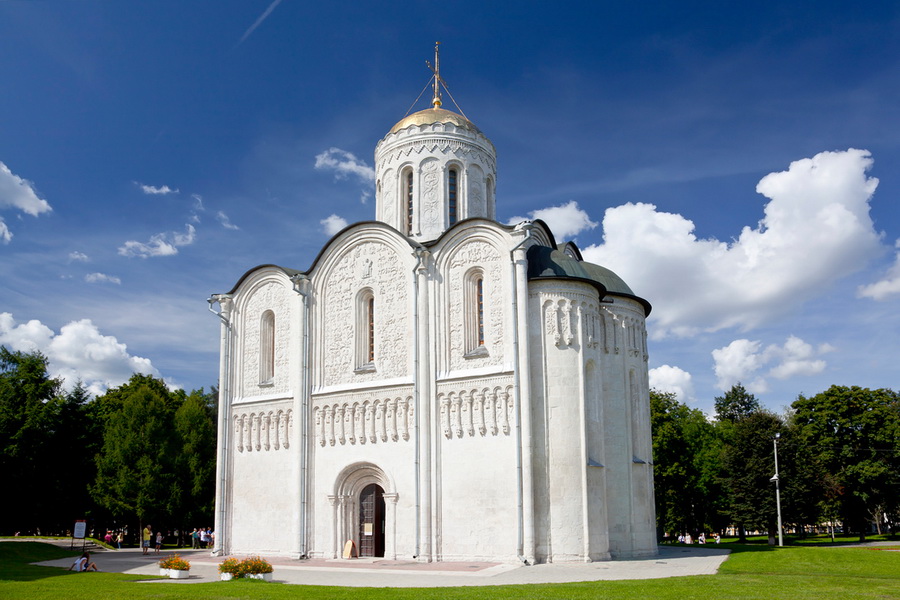 The noble, elegant, regal – these are only a few epithets used to describe this beautiful monument of ancient Russian architecture. History has not preserved the names of the builders of this wonderful church, but we know the approximate date of its laying - the years of 1194-1197, which correspond to the rule of Vsevolod the Big Nest as well as the name of the holy warrior Demetrius of Thessalonica, in whose honor and the church was consecrated. St. Demetrius Cathedral is one of the most beautiful and most original cathedrals of old Russia.

Despite its modest size this cathedral makes a tremendous impression. The effect is produced by the unique decoration of its walls. They are decorated with sculptural decorations and carved bas-reliefs. From a distance it seems like the temple is covered with fine lacy cobweb.

The walls are covered with more than 600 bas-reliefs. The center of each façade features either King Solomon or David (the scientists have not yet come to a unanimous opinion). Around them are the characters of Greek myths, biblical scenes, figures of history as well as the symbolic images from flora and fauna.

All in all there are about 1,500 carved stones. The bottom part of the walls is flat and smooth decorated with ornamental columns, which look like fringe of an expensive carpet. Surviving inside the cathedral are the fragments of the 12th century paintings with the image of the Doomsday with its central scene depicting the twelve apostles with the open Gospel in hands and the angelic host behind them. The figures of the apostles and angels of the South were painted by Greek masters. Besides, the temple features the icons including the most famous and expensive one with St. Demetrius of Thessalonica on it.

At present the temple does not work and open only to tourists. It is listed as a UNESCO monument of federal importance.