Monastery of the Nativity of the Virgin, Vladimir 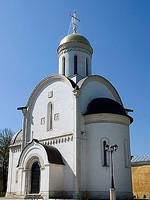 You will see this monastery right in the center of the village. It was founded in the 12th century by Prince Andrei. Unfortunately, the main building, the Cathedral of the Nativity of the Virgin has not survived in its original form, which amazed the people with its beauty and richness. It was rebuilt in Baroque style in 1866. The five-domed, glistening with gold cathedral is very similar to the Cathedral of Christ the Savior in Moscow. The monastery has preserved a part of the former palace built by the Grand Prince Andrei, the tower with spiral staircase and the passage to the cathedral. It was there in the summer of 1174 that Andrei Bogolyubsky was assassinated by conspirators. Now the tower’s inner walls are decorated with the frescoes of the 18th century depicting the scenes of the Prince assassination.

Bogolyubsky church has a monastery and a convent. Surviving is the church of the Nativity of the Virgin (1756), the holy gate with the bell tower and the church of the Assumption (1842), the Annunciation Refectory Church (1804), the cells and other household buildings. Near the cathedral, under the elegant canopy is the holy water bowl. According to legend, it was at that point that the carriage with the Vladimir Icon of the Mother of God stopped. The cathedral is also known for Bogolubskaya miraculous icon of the Mother of God.