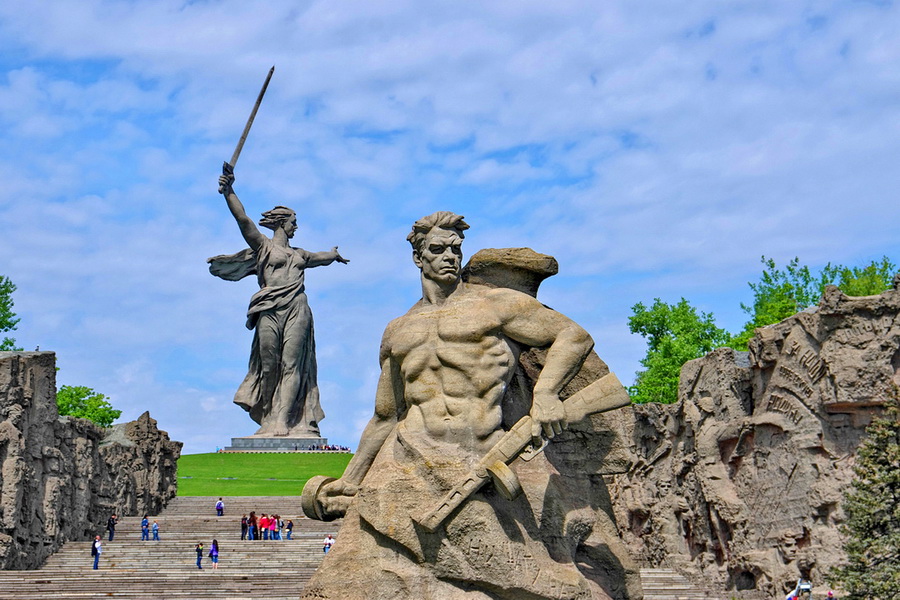 Mamaev Hill - is the highest hill in Volgograd (102 m). That was the highest point which Russian solders defended so frantically that after that bloody battle the hill was covered with mine debris, corpses, bombs and shells.

The land was pitted with bomb craters. This heroic hill is crowned by the monumental Motherland Statue – the symbol of Volgograd. This statue is well-known all over the world, it calls for struggle, it gives courage, it embodies all those values which a warrior possesses. The statue’s total height is 85 meters. Is weight is 8 000 tons, the only 33-meter sword weights 14 ton.

At the pedestal of Mamaev Hill there begins a historical memorial complex "To Heroes of Stalingrad Battle on Mamaev Hill". In total there are 10 monuments dedicated to Stalingrad Battle in the complex. There are the welcome composition at the entrance; Square of the “Fighters to the bitter end”, Alley of Poplars, Ruined Walls, Square of Heroes, Monumental High relief, Square of Sorrow, Hall of Warrior Glory and Military memorial cemetery. The monuments and monumental high relief, sound accompaniment and the Eternal Flame in the Hall of Warrior Glory leave the indelible impression on visitors.