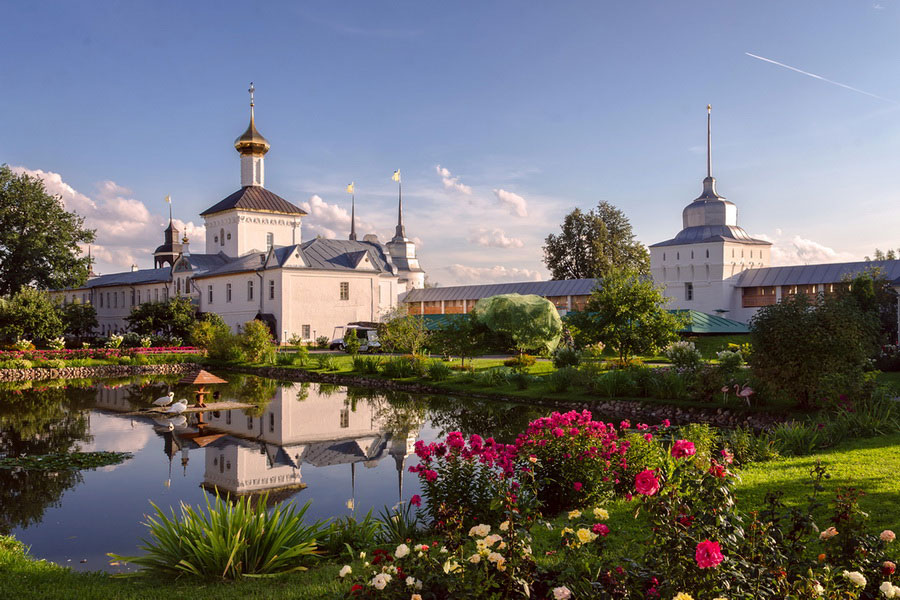 On the left bank of the Volga, beaming with its golden domes, stands the beautiful white Tolga Convent founded in 1314. The founding of Tolga Convent was associated wit the miraculous appearance of Tolga Mother of God. Allegedly, the local lord, having fallen asleep on the bank of the river, was awakened by a bright light. He saw that the glow was coming from the image of the Mother of God on the tree. Later, on that site the temple was founded, and the icon became the convent’s shrine.

Four convent temples crowned with multiple heads with shining domes and crosses, soaring above them slender multi-layered tall bell tower, white on the horizon, attract attention to Tolga Convent from quite a distance.

The center of Tolga Convent's yard is decorated with a temple, the Vvedensky (the Entry of the Most Holy Virgin into the Temple) cathedral built in the late 17th century. Vvedensky cathedral is a five-domed temple surrounded from the three sides by galleries and porches. Its size is amazing. It is also the fact that Vvedensky cathedral is practically devoid of external decoration.

Also interesting is the Holy Gate with the gateway St. Nicholas Church (1672) and a nice-looking Sretenskaya church in Moscow baroque style.