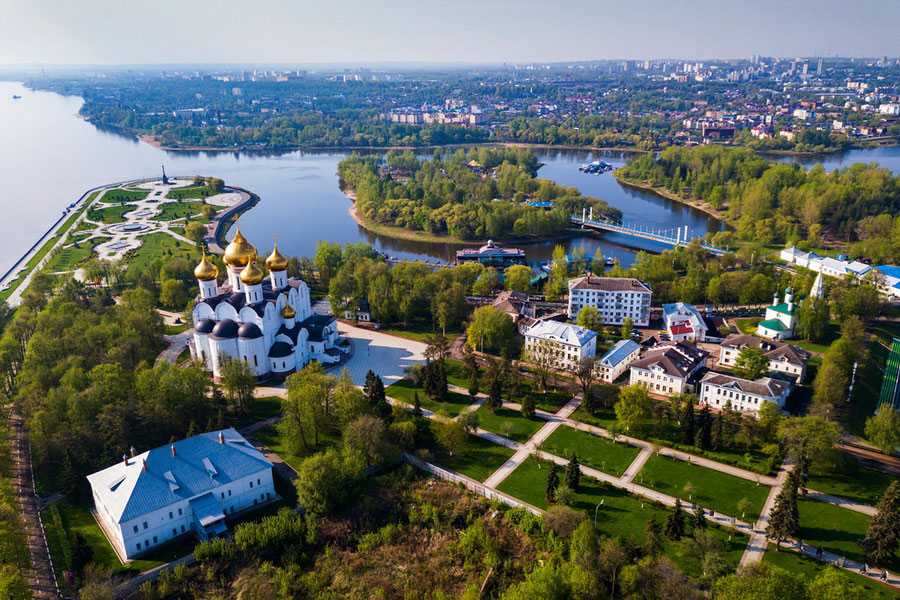 Tours, Attractions and Things To Do in Yaroslavl

Yaroslavl is one of the oldest Russian cities. It was founded in the 11th century on the banks of the Volga River. The city is included in the list of UNESCO World Heritage Sites and is part of the Golden Ring of Russia. Yaroslavl has preserved not only Russian medieval buildings, but also the architecture of the 18-19th centuries in the Western European style.

Yaroslavl gave the world the first female cosmonaut - Valentina Tereshkova. The city is also famous for its ancient temples and miraculous icons – the Yaroslavl Oranta and the large icon of the Mother of God "Tolgskaya" attract thousands of pilgrims every year.

In the V-III centuries BC, the first settlement was discovered on the territory of the modern city. Yaroslavl itself was founded by Prince Yaroslav the Wise on the site of the pagan Bear Corner. The date of foundation is considered to be Ilyin's Day (August 2) 1010 years. At the same time, the first church of the city was founded in honor of the prophet Ilya.

Almost immediately, a fortification was erected in the city – the Kremlin, which served as a defense until the XVII century. Until the XIII century Yaroslavl was a small border town. In 1238, after the Mongol invasion, the city was devastated and burned.

In 1612 Yaroslavl was the temporary capital of the Russian state for three months. In the Middle Ages, becoming part of the Moscow Principality, the city began to grow - merchants moved here not only from nearby, but also from distant cities. In the XVII century Yaroslavl became an important craft and trade center – the second largest in Russia. At the same time, the city became the second largest in terms of the number of residents of Russian cities.

The coat of arms of Yaroslavl depicts a black bear. The symbol appeared in the middle of the XVIII century. The bear is considered a symbol of strength and foresight.

Tolga Monastery is a place where thousands of believers come every year. In the XIV century, an icon of Our Lady of Tolga was found on the site of the future monastery, after which the monastery was named. The icon is considered miraculous – in the middle of the XVI century, Ivan the Terrible, suffering from leg disease, received healing through prayers in front of this icon; many people have received and continue to receive healing. For almost six centuries, the monastery was male, and in the late 1980s it became female.

The Transfiguration Cathedral of the beginning of the XVI century, once the main temple of the monastery of the same name, is one of the main attractions of the city. The building is made in a simple style without decorative elements in the exterior. Ivan the Terrible came to the temple several times.

Once the Transfiguration Monastery, founded in 1216, was the main cultural center of the city. A list (copy) of the "Words about Igor's Regiment" was found here. To date, this is the only surviving copy of the ancient chronicle. During the Soviet era, the monastery was closed. Today, the Yaroslavl State Historical, Architectural and Art Museum-Reserve is located on the territory of the former monastery. The belfry (bell tower) of the monastery is considered one of the best viewing platforms in Yaroslavl.

The Yaroslavl State Historical, Architectural and Art Museum-Reserve includes the ancient buildings of the Transfiguration of the Savior Monastery, the churches of Ilya, St. John Chrysostom, St. Nicholas, St. John the Baptist, Christmas and Epiphany, as well as several thematic museums and a library with scientific literature.

The so-called bear places of Yaroslavl are all over the city. These are bears made in different techniques: sculptures, topiary, catering establishments and even Bear Ravine. You can even arrange a quest to find as many bears as possible in Yaroslavl for a certain period of time.

The Volga embankment, stretching for three kilometers, has a leisurely walk. It offers beautiful views of the attractions and old buildings. Street concerts are often held on Myakushkinsky Descent.

The Vlasevskaya Tower became one of the first stone buildings in Yaroslavl. In the XVII century, it served as a defensive structure. Later, a chapel was attached to it, which eventually became the Znamenskaya Church.

The Volga Tower has also been preserved since the XVII century. At the beginning of the XIX century, the Volga Gate was added to the west side of the tower.

Empress Catherine II often stayed in the metropolitan chambers, built at the end of the XVII century for the Metropolitan of Rostov and Yaroslavl. Today, the Museum of Ancient Russian art is located in the building, which is considered an architectural monument.

The Governor's House, built in the XIX century, is famous for its beautiful garden. The Governor's estate served as a traveling palace for Alexander I, Nicholas I, Alexander II, Alexander III and Nicholas II. Today, the Yaroslavl Art Museum is located on the territory of the Governor's house. It houses a large collection of paintings of the Russian avant-garde and primitivism, as well as ancient icons.

In the village of Krasnye Tkachi, Yaroslavl region, there is a museum-reserve of N.A. Nekrasov "Karabikha". It was here in 1861 that the famous writer acquired the estate and lived in it for 14 years.

The Museum of the History of the city of Yaroslavl is located in a building of the XIX century. Here you can learn about the history of the city and citizens, as well as look at household items. The museum "My Beloved Bear" accommodates more than 700 bears. There are large and miniature, soft and iron, expensive and memorable figures of bears. Every year the museum is replenished with new exhibits.

The museum "Music and Time" grew out of a private collection. At first, bells and coins were exhibited here, now the exposition has grown – visitors are waiting for collections of horseshoes, samovars, porcelain dishes and much more.

Yaroslavl Children's Railway completely imitates real railway tracks together with trains and stations. Children also "work" here – they manage trains, monitor the schedule and monitor the condition of the cars.

In Yaroslavl there is a monument to the plumber Afonya and the plasterer Kolya from the movie "Afonya". The patrons of the sculpture are residents of the city, because "Afonya" was filmed in Yaroslavl.

The art object "IT-twist" is a diamond of desires. You need to approach it, select the most cherished wish from the list and scroll through it three times.

The dappled horse – an iron cartoon horse with carved apples on the body - reminds that there was a horse-carriage yard on this place.

What to Bring from Yaroslavl?

In addition to traditional souvenirs, bring Yaroslavl finift - art products made of vitreous powder and special enamel. Also bring a bear with you – the symbol of Yaroslavl.