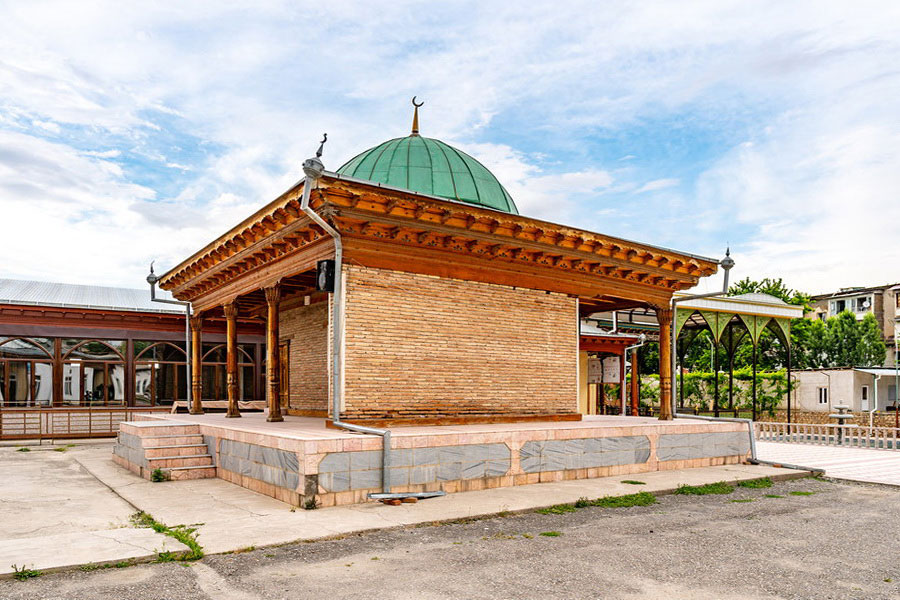 If you ask any local resident who is buried in Khazrati-Shokh Mausoleum you will get the answer that this sacred place is the tomb of St. Khazrati-Shokh - the brother of Kusam ibn Abbas, the cousin of Prophet Muhammad buried in the 11th century in Samarkand complex of Shakhi Zind. This is the way the legend is told in this place.

The mausoleum itself being one of the most ancient landmarks of Tajikistan is a part of the historical-architectural complex "Khazrati Shokh" located in the old part of Istaravshan. The complex consists of three cult structures: Khazrati-Shokh Mausoleum, Khudoyor Valami Mausoleum and Khazratishokh Mosque (also known as Namozgokh) built in the 19th century. All three structures stand in a semicircle. Each of them was erected at different times and has its own history of creation and purpose. In the past the city cemetery and the madrasah were also a part of the complex.

Today Khazrati-Shokh Mausoleum is a modest two-dome brick building with a tomb (gurkhan) and a chapel (ziyoratkhon) which has been repeatedly restored.

In front of the mausoleum there is a spring the water in which is considered holy and medicinal. According to a legend the spring was formed after caliph Ali dropped his crosier into a high-mountain Lake Ojkul. The crosier emerged at the feet of Khazrati-shokh buried in Ura-Tyube right where the spring was born. It was from this spring that the history of the mausoleum started. According to the scientists the Muslems consider a spring as a source of life; this is why the burial place of the honored religious figure appeared there. Later the mausoleum was erected above his tomb.

The complex is dated the 18th century though historically it emerged much earlier - in the 10th - 11th centuries.