History of Pamir Highway is over one hundred years, but the history of Pamir itself is over millennia. In the first centuries of B.C., there were small independent states Shungan, Wakhan and others, that held contacts with such states as ancient India, China, Sogdiana, Kushan Empire and others. Several ruins of such fortresses as Kakh-Kakha, Yamchun and other monuments have been preserved until today. Some scientists think that one of the Silk Road routes had passed there, coming from China to Afghanistan and India. Archaeological findings testify presence of Zoroastrians, Buddhists and Muslims in Pamir.

The birth date of Pamir Highway can be considered the 14 March 1981 when lieutenant colonel Bronislav Grombchevskiy read a lecture on “Our interests in Pamir. Military-political outline” at the secret meeting of the General headquarter of the Russian army in Saint Petersburg. The lecture had the wanted impact on top authorities of the army of the Russian Empire and it was decided, under conditions of complete secrecy, to construct a road from Osh to Sary-Tash, on the territory of present Kyrgyzstan. In 1894, the first lot of the M41 Highway was ready, connecting Ferghana and Alay valleys. 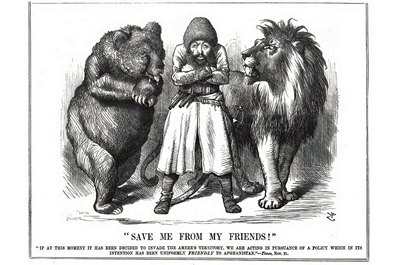 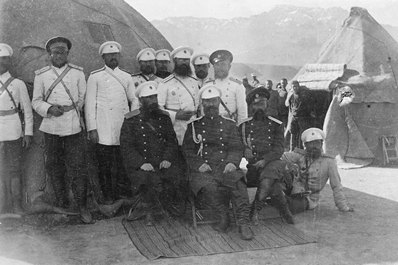 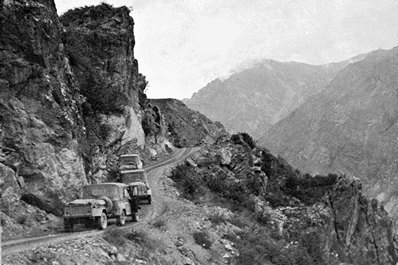 The aim of this secret bridgehead was to prepare for any possible invasion of the British Empire to Central Asia. It would allow to throw troops to the south in case of necessity. All this was a part of geopolitical confrontation now known as “The Great Game”. In the second half of the 19th century, the English were moving forward to the north of Asia via India and Afghanistan, and the Russians were heading south taking territories of current Kazakhstan, Kyrgyzstan, Uzbekistan and Tajikistan under control. Finally, colonial ambitions of the both empires physically met on the banks of the river Panj. As a result, they came to a peaceful agreement when each party would remain on their side of the wild river that became a border existing up to now between Afghanistan and Tajikistan.

Later, in the late 19th century, the road was stretched until Khorog located on the banks of the river Panj, where the Russian frontier post was set. An interesting fact of that time is that in 1914, commandant of the Khorog border line gave an order to deliver a piano from Osh for his daughter, and a dozen of soldiers had carried it on their shoulders walking for over 700km through mountains passes. The piano that took one month to deliver is now exhibited in the Khorog History Museum.

In 1937, highway that connects Osh and Khorog was built on the Pamir tract. In 1940, the second and final part of the road, between Khorog and Dushanbe, was launched. During the war in Afghanistan (1979 – 1989), Pamir Highway served as a strategic road; troops were shifted on the areas along the river Panj. However, during the first years of independence and Civil War in 1992-1997, quality of roads on the Pamir Highway began to decrease as no one was reconstructing damaged roads.

Today Pamir Highway is taking up the threads. The road development is promoted by massive cargo from/to China. Apart from that, in the recent years, Pamir has become a more popular destination for off-the-beaten path adventure seekers. Tourism facilities like guests houses, rural infrastructure and roads, are gradually getting bettered responding to rising demand.