Murghab is a high-mountain village in the eastern part of Tajikistan located at an elevation of 3600 m above sea level. Vegetation is scarce on such elevation, and those rare trees are well taken care of. Guests of Murghab may experience mountain disease due to the lack of oxygen. Climate there is rather severe with very dry air, strong cold winds and high UV. 40°C (degrees Celsius; 104 °F, degrees Fahrenheit) in summer and -40°C (-40 °F) in winter are typical.

No one would actually think of building a village in such rough conditions, but at the time of the Great Game, when Russian and British empires were struggling for the influence in Central Asia, Russian troops arrived there in 1892 and organized a frontier post. It was called Shadjan post. First, they built small houses to survive harsh winter, and later continued with other constructions. This is how the history of Murgab began. Few years later, Russians established a frontier post in Khorog. As a result, Shadjan post became less significant. Later, Murghab village became one of the points on Pamir Highway and served as a center of geological exploration in eastern part of Tajikistan. Today Murghab is a must-stop place for travelers, as there is no other populated settlement for hundreds of kilometers where it would be possible to stay for a night in relatively comfortable conditions. 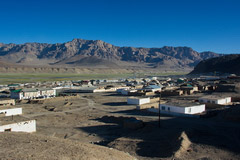 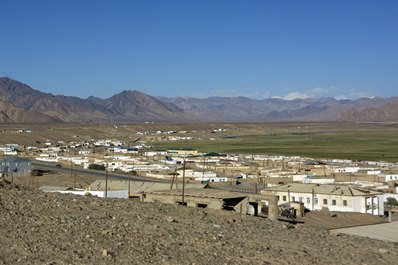 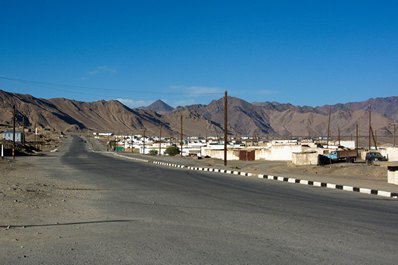 Murghab still looks like a rough place; some even call it post-apocalyptic for the image of numerous clay houses with rocky plateau and mountains in the background. There is scarcity of water supply and electricity that are provided only at particular timing due to cost-saving purposes. Infrastructure includes only a small hospital, bazaar, hotel and a few guesthouses. Population of Murghab is around 6300 people represented by Pamirians and the Kyrgyz. During high season, you can always meet around 50-100 tourists from around the world traveling along the Pamir Highway.

Among local sights, there is Lenin monument that remained from the Soviet times, a bazaar, where shipping containers replace shops. There some food and expensive fruit are sold. Another remarkable place is a football field where local youngsters sometimes play a game and locals come to support. All this gives a special tone to the severe image of Murghab and your Pamir highway trip would be incomplete without visiting this village. 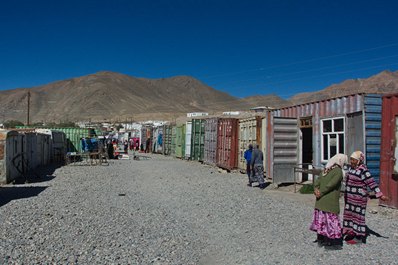 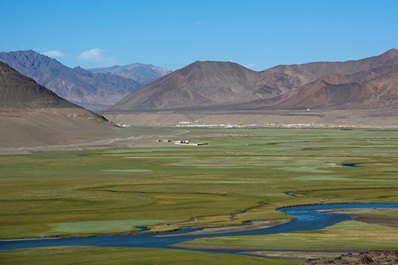 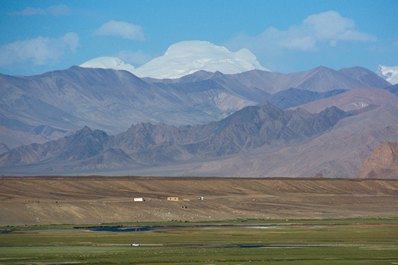