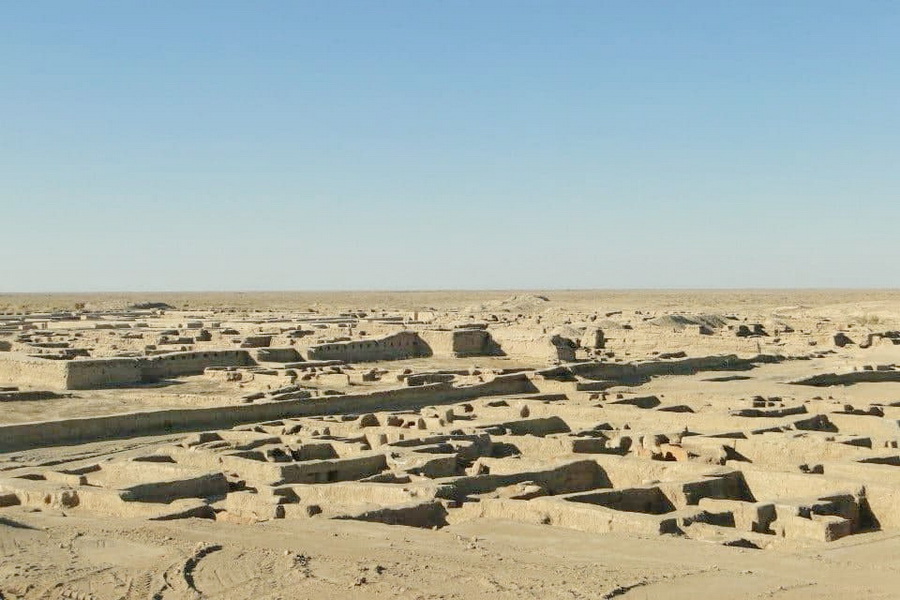 It was not long ago, in the 90’s, among the sands of the eastern Karakum desert, archaeology scientists discovered a huge necropolis dating back to the 3-2 millennia B.C. in the oasis of Mary. There was once a capital city, called today Gonur Tepe (translated from Turkmen as “Grey hill”) with its palace and few temples that could compete with erections of Assyria and Babylon.

Excavations of this place led scientists and historians to amazing discoveries. The temple town kept its mysteries in the sands of the desert for several thousands of years. Gonur Tepe was the largest settlement in the entire Margiana. It was located on a small hill on the right banks of the riverbed of Murgab. Excavations continue up to now, and archeologists still do not know how big the area is. The preliminary data gives clue that the area of the ancient city ranges between 30 to 50 hectares (1 hectare = 10 000 square meters). This assumed “capital” did not have a ruler with definite commanding authorities, governing the entire country, but rather a spiritual leader – a supreme priest. People respected him unforced and only willingly, prompted by the faith.

Gonur Tepe is a capital temple city of the country Margush. Archaeologists managed to discover convincing facts of spiritual rituals and traditions proving that Gonurians believed in Zoroastriasm.

In the center of the town, there was a palace with many big rooms surrounded with strong, thick walls and few square towers. The main priest most probably resided there. Around the palace, there were temple constructions from all 4 sides connected with one wall. In the corners, the wall was fortified with square towers, but not as big in size as in the external wall of the palace.

Beyond the walls, in the southern side, there was a swimming pool, 180x80m in size and 2m deep. From the northern and western parts of the temple complex, there were other two pools but smaller in size. All these constructions were surrounded by another medium and rather narrow wall fixed with pilasters from the inner side. Scientists suppose that this wall served as a symbol of restrictor of the holy place from the other world and was erected symbolically, and not for defense purposes.

Archaeologists found fragments of the façade part of the buildings testifying that it was stone mosaic used for decoration of walls. The technique of the Gonur masters is unique: initially the image on the wall was drawn in paints and only later done with stones. Any similar technology of mosaic processing hasn’t been found in the world yet. An entire row of potteries was found on the territory of Gonur Tepe, certifying that earthenware was in high demand.

One of the most interesting discoveries is the burial underground premises found in the eastern part of the big pool. Everything there showed that this was the burial of local elites of that period. Archaeologists dug 5 tomb-vaults in total; each of them looked like a house with several rooms. Two of the tombs had burials of several people. Most probably bodies belonged to the servants, who, according to ancient customs, were supposed to escort their master to the other world. It was also according to traditions that the burial place was filled with valuable things that once belonged to the deceased.

Underground vaults were robbed already in the times when the city was inhabited. However, the archaeologists managed to find few silver and golden vessels and some jewelry pieces. Apart from the jewels, scientists discovered more fragments of mosaic compositions in the tombs. They are assumed to served as decoration of the shrines, but were damaged with the time. There were big boxes in the tombs once filled with gifts to the spirits of the other world.

Together with the burials, a foundation pit, 2.5m deep and 5m in diameter, was found not far from the tomb. This place turned out not to be robbed and archaeologists excavated there many interesting items and mortal remains of ancient people and animals there.

There was a chariot in the center of the foundation pit that obviously was thrown down. If we believe the legends of those times, the chariot was necessary for the deceased in order to transfer to the other world. There were mortal remains of seven people, seven dogs, two donkeys and two camels next to the chariot.

Number 7, corresponding to the seven deceased people and seven dogs killed in a special way as a sacrifice, was not chosen accidentally. Both ancient Zoroastrians and modern Turkmens considered digit 7 as sacred. Descendants of the ancient Gonurians still have strange attitude to dogs – they are respected and feared at the same time.

Among little items, archaeologists found a bronze lamp, two stone sticks with silver rings on its ends, a scoop, three bronze items, unique vessel that is almost one meter in height and consisting of seven ball-shape cisterns and a wide round-bottomed vessel.

Apart from the big foundation pit, there were found smaller burials, as well as some unusual things that scientists cannot give a clear explanation to. For instance, in one of the tombs, they discovered few stones done into smooth and even balls next to the ceramic dishes, and some pistachio shaped stones. It is still unknown what these items were made for and the role they carried out.

Necropolis of Gonur Tepe still holds many mysteries for historians, archaeologists and scientists. This place is one of the important touristic objects of Turkmenistan, visited by thousands of tourists every year. Discover this wonderful and mysterious sight to touch the secrets of Turkmens’ ancestors who were great and talented sculptors, builders and jewelers of the past.