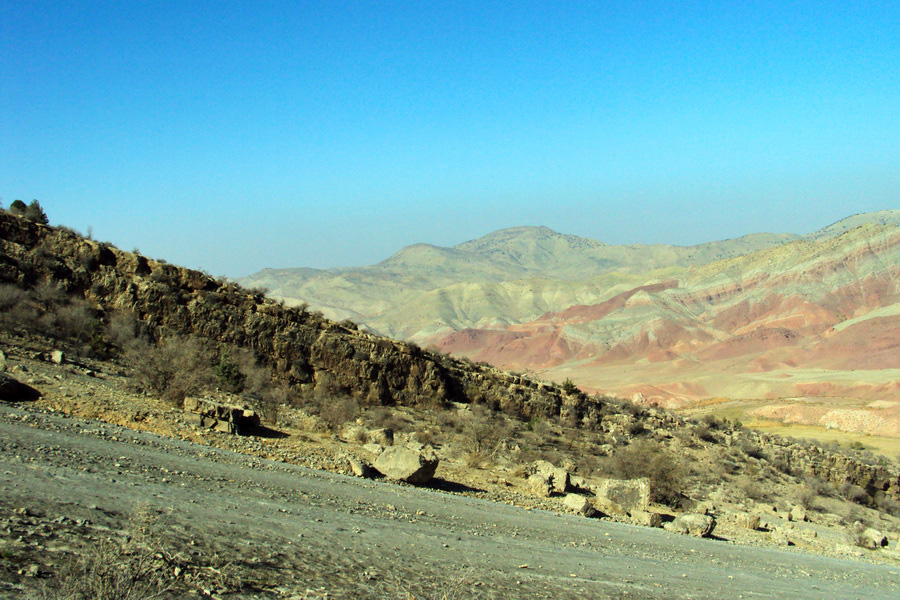 On the very east of Turkmenistan, in Kugitangtau (Koytendag) mountains, at the height of 1,500 meters, there is one of the most amazing natural attractions – the Dinosaur Plateau. Actually, it is a large limestone slab lying on a hillside, the way to which, from the small village of Khodjapil, takes a half an hour. The world first learned of this place in 1980, which soon acquired a reputation of the greatest “repository“of dinosaur footprints. Similar dinosaur footprints were also found in Uzbekistan, Tajikistan, China and the United States, but none of them is equal in number to Turkmenistan; there are about 150 paw prints of different size and condition.

The plateau itself is a 200х80-m site with a slope of 17-20 degree. This limestone region opened up by nature is surrounded by natural earth slopes covered with bushes and grass, while the elongated plate itself is bestrewed with strings of huge footprints. The fossilized impressions with the dimensions from 20 to 70 cm belong to three species of dinosaurs of the Jurassic period, which never been exactly identified. Some scientists suggest that it traces of Megalosaurus, Iguanodon and Tyrannosaurus. It is interesting to note that together with trails of dinosaurs, footprints of human or human clone have also been found, but their origin is still a mystery.

The formation process of Dinosaur Plateau is described as follows: about 145-150 million years ago, at the end of the Jurassic period, there existed a shallow lagoon bottom – one of the habitats of huge dinosaurs. Shortly thereafter, the water receded and the former bottom dried up and turned into a solid layer of limestone. Millions of years later, certain geological processes caused the tectonic plates to collide and form an assemblage of rocks in this area. The plate, previously lying horizontally, tilted, and rose to the present height. Then a few million years later the softer rocks were eroded by water and wind, exposing this area with the “autographs” of prehistoric animals.

Along with a scientific version of the plateau phenomenon, there are also two legends on the origin of these trails. The local legend has it that once a year the plateau became a place for white elephants to gather in order to perform their sacred dances. Furthermore Khodjapil, the name of the village, located nearby, is translated from the Turkmen language as “sacred elephants”. According to the second legend, these trails were left by the battle elephants of Alexander the Great. But this is only legends which nevertheless add more colors to this Turkmen sight unique enough on its own.