The Turkmens are an ancient Turkic people

The Turkmen are an ancient Turkic people, currently making up 67% (more than 6 million people) of the Turkmenistan’s population. In addition, the Turkmen live in Iran, Afghanistan and Russia.

By their anthropological appearance, the Turkmen are notable for large stature, oblong shape of the head, narrow face, a rather high forehead, relatively dark shade of hair, eyes and complexion. Mongoloid features are insignificant. 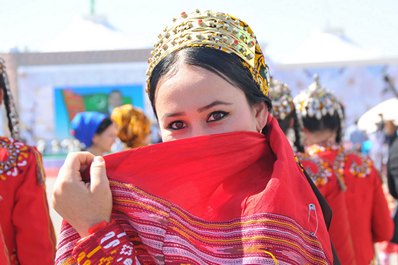 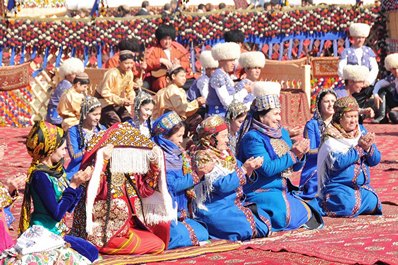 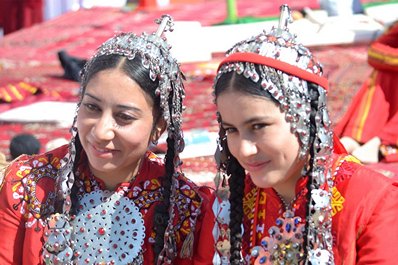 There are different opinions about the origin of the Turkmen people. Most believe that they are the descendants of Oguz Khan. Since the Oguzs, penetrated in large numbers in the boarders of Turkmenistan in the IX - XI centuries, having played an important role in shaping the Turkmen as a nation, determine their language, culture and to a large degree  physical appearance besides many other features. However, some scientists believe that the earliest ancestors of the Turkmen were the ancient Iranian-speaking nomadic and semi-nomadic tribes living in the territory of modern Turkmenistan. Even the ethnonym “Turkmen” has the Old Persian origin. Iranian-speaking nomads were called by this name “resembling the Turks” (turkmanend). Ethnonym Turkmen first appeared in the Arabic sources of the second half of the X century and according to various medieval sources means “tyurk-like” or “the Turkic people”. One way or another, but the process of formation of the Turkmen nation completed in XIV-XV centuries, when after the Mongol conquest new tribal associations formed, which became the core of the Turkmen nation.

The traditional occupation of the Turkmen was irrigated farming combined with the nomadic cattle breeding. The Turkmen led semi-nomadic style of life, according to which residents of one village were divided into cattle-breeders and settled farmers. The Western Turkmen were mainly cattle-breeders (sheep, camels, horses), and some Turkmen, who lived in the oasis, were engaged in farming (wheat, sorghum, melons, cotton) and cattle ranching. By the mid XIXth century carpet and silk weaving were highly developed as well.

Under the influence of such lifestyle the Turkmen, like many other Asian nations through the ages preserved their cultural features, traditions and customs of their ancestors. In this regard, unique identity is inherent in people, which can be seen in almost all spheres of life. For example, traditional dwelling of the Turkmen, yurt, is still used in many areas as a summer home on the estate or as a dwelling shepherds on remote and seasonal pastures. Not looking at the fashions, Turkmen and to this day, remain committed to their traditional clothing.

Living in the country especially in rural areas with obvious pleasure wearing woolly hat, long quilted robes that look like free pants. Women often wear long silk dresses and striped trousers, hiding her hair under light scarves and scarves. Such clothing in hot and dry climate is very practical. Customs and traditions accompany the life of local residents and the life of the Turkmen family. 89% of the population of Turkmenistan - Sunni Muslims. But the status quo for centuries tribal relations for the Turkmen are no less important than religion. Even urban residents from members of his tribal group, and in rural areas, clan and tribal attachment dominates.