From the beginnings of Islam, there have been three types of mosques: Djuma mosques, which are intended for the large crowds that come to Friday services, Namazga country mosques (musalla idgoh), which are used by the male population of both the city and the surrounding countryside to celebrate the two Muslim holidays Qurban and Ramazan, and Quzar mosques, which are designed to be used as daily mosques in residential neighbourhoods.

We know very little about the thirteenth century Djuma Mosque in Bukhara, for it has been rebuilt completely since the time of its original construction. In any case, it had a vast courtyard surrounded by galleries. However, the minaret which was built in 1127 A.D. and called the Kalyan (Great) Minaret, has survived. It still dominates the skyline of Bukhara, astonishing all who see it with its magnificent and flawless shape. The minaret was designated to summon Muslims to prayer five times a day. Normally, each mosque had its own minaret, but the main minaret was situated near the Djuma Mosque. It was from the gallery, at the top of the minaret, that the muedzin summoned the believers to prayer at the top of his voice. 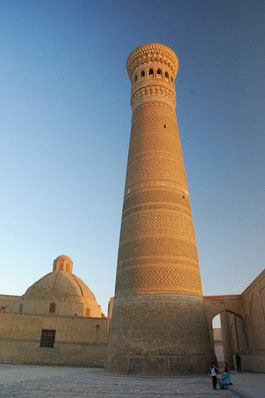 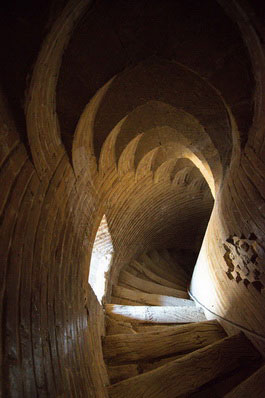 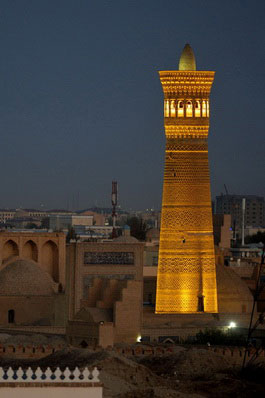 The Kalyan Minaret was built twice. The fact is it collapsed just before it was completed the first time, probably because of the builders did not take into account the soft ground underneath, due to the many cultural layers beneath the city. A new, more durable foundation was laid for the minaret and, by 1127, construction of this second minaret was completed. According to someone writing at the time, «there was nothing like this minaret, for it was built very beautifully». Indeed, the forty-eight m tall Kalyan Minaret is a flawless example of both civil engineering and superior architectural creation. The baked bricks it is made from form a monolithic circular tower that narrows from its thick base to its top.

The body of the minaret is topped by a rotunda with 16 arched fenestrations, from which the muedzins gave the call to prayer. In times of siege or war, warriors used the minaret as a watchtower. Earlier, the minaret apparently had another round section above the rotunda, but now only the cone-shaped top is left. The baked bricks, from which the minaret is made, are the main feature of its architectural design. The body of minaret is belted with narrow ornamental strings made of bricks. They are arranged in a chessboard order, either straight or diagonally. A frieze with inscriptions goes around the minaret upon a muqarnas (stalactite) cornice. The frieze is covered with blue glaze, which was used widely in the architectural decor of Bukhara at that time.