Of all the medieval buildings in Bukhara, the Samanids Mausoleum is of special interest. This world-famous architectural masterpiece was built at the close of the ninth century. The mausoleum was erected as a family crypt immediately after the death of Ismail Samani's father. Later, Ismail himself and his grandson Hasr were also buried in it. It is interesting to note that erecting crypts was against Islamic law at that time, for Islam forbade erecting any post-mortem monuments upon the tombs of Muslim believers. However, the prohibition was broken in the middle of the ninth century by one of the caliphs himself, for whom a special as-Suli-biya Mausoleum was built. Ismail merely followed his example. 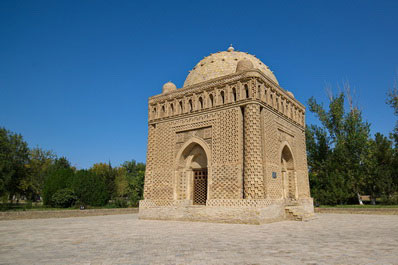 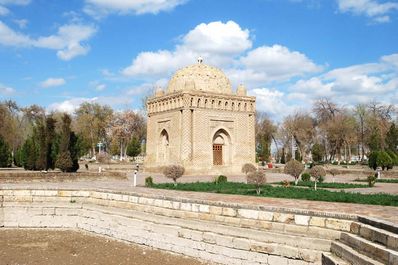 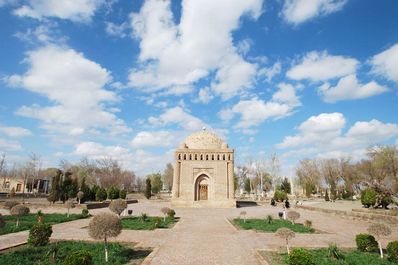 The Samanids Mausoleum reveals the genius of a plain design. This is seen in its composition and the balanced design of its facades and interiors. It is composed of a semi-spherical dome resting on a cube. All of the facades are identical and marked with three-quarter domed columns on the corners. There is an upper armature and a central entrance with a visible horizontal dividing line.

The core is characterized by regular kiln-dried bricks, forming horizontal, vertical, and diagonal patterns on the walls. There are also separate details in the shape of disks or rosettes. Analysis shows that all elements in the Mausoleum are based on squares and diagonals: the elements form geometrically digressive lines. The same unification is seen in the architectural forms and kiln-dried brickwork in the interiors. The architectural design of the Samoniy mausoleum is entirely unique. It owes much to pre-lslamic Soghdian architecture, which used four-arch domed compositions and diminished forms on the top of buildings, including disks and rosettes on decoration columns (as can also be seen in the section between the dome and the drum of the interior). Although this building is connected with pre-Islamic architecture, it also anticipates the emergence of a new architectural style with comparatively small dimensions; the Samanids Mausoleum is full of magnificence and feeling of moving from this world to the world that lasts forever.