On the colorful cliffs of one the Sultauizdag eastern spurs, in the Kyzyl Kum desert there survived ruins of one of the largest castles of ancient Khorezm– Ayaz-Kala.

Folk legends associate the name of the fortress of with the name of the legendary warrior-slave Ayaz. Ayaz is a Central Asian Turkic folklore hero. The semi-mythical hero, according to a legend, threw himself at an Amazon princess who lived in the Kirk-Kiz fortress.

The archaeologists claim that the Ayaz-Kala fortress belongs to the II century AD – a heyday of the Kushan Empire. Stretching in a chain from East to West it was part of a system of frontiers, built to protect the oasis on the side of the desert. All fortresses were located on a visible distance from each other, probably in order to make transmission of signals of approaching enemy convenient. 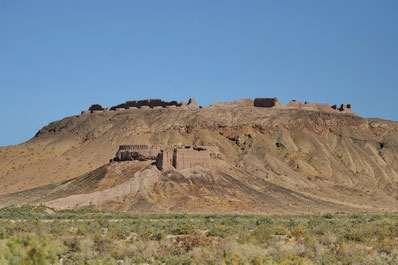 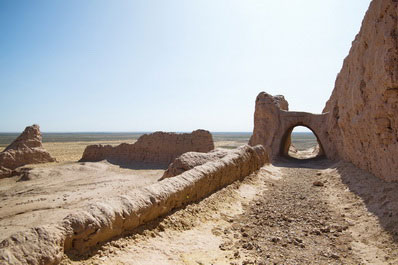 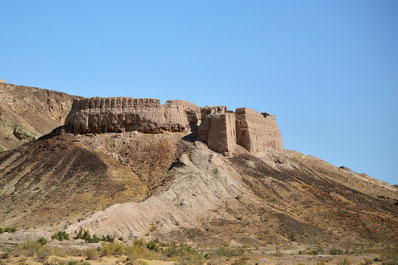 The Ayaz -Kala complex is interesting because unlike other castles of ancient Khorezm, it has unfortified rural settlements – a set of residential buildings, each with a large yard, enclosed by a low brick wall and planted, apparently, with gardens and orchards at the time. At one of the walls of the yard there is a relatively small detached house with 15 rooms, indicating that the process of separation of individual household from a tribal community had already begun at that time. Perhaps it was the home of a wealthy official or garrison commander.

Among dozens of unfortified farmhouses in the Ayaz-Kala complex, three fortresses-buildings stand out for their significant size. They are Ayaz-3, a giant fortress with a large courtyard surrounded by strong walls with towers and a maze near the gate. Near its north-eastern and north-western corners there are 40-room houses cross-cut with hallways. 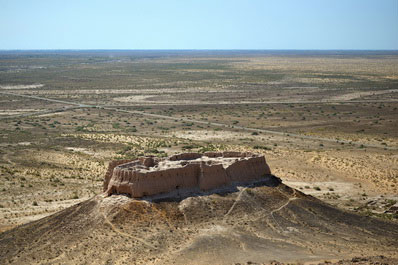 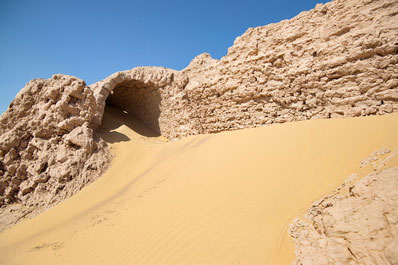 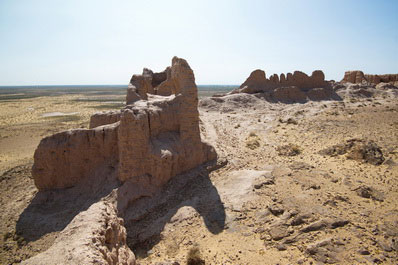 The Ayaz-2 ruins sprung on a rock, also date back to the Kushan period, but reconstructed by the Afrigids in the V-VII centuries. On the cliff plateau, adjacent to the settlement there is Ayaz-1 with semicircular towers, a maze near the gate, arched gallery in the wall base and a well, cut in the center of the rock, which was a place for the livestock – the main wealth of the inhabitants–to gather around . In the north-east of Ayaz-1, there are remains of a watchtower.

Thus, Ayaz-Kala was neither a city nor a settlement, but a fortress complex, which accommodated Kushan border detachments nearly 19 centuries ago.

The Ayaz-Kala ruins have been hidden with the sands for millennia, but today thanks to numerous archaeological excavations, we can touch its ancient history.