Ruins of thousands of fortresses are disseminated at boundless open spaces of the Khorezm steppes, but the remnants of Koy-Krylgan-kala, the Fortress of Lost Rams, are unique. The fortress was discovered by archeologists of the Khorezm expedition casually in 1938. Archeologists were surprised with the form of ancient construction, unprecedented till then in Khoresm: the powerful citadel with the remains of a protective wall was not square and or rectangular as it was used to see, but it was round. Outside, protective constructions had the form of a correct circle with the citadel in the center, it was surrounded with an external fortification with towers. The space between the central building and the wall named the "ring" appeared completely built up. The clay construction was enormous: diameter of the central building was 42 m, height in the best remained part was about 8 m, the diameter of the whole construction - about 90 m.

Thousands of fragments of magnificent pottery have been scattered on sandy barkhans round the fortress and among its ruins. Along with other findings, in particular bronze tips of arrows, they were used to identify its age - archeologists found out that it was the most ancient of all the monuments to ancient Khorezmian statehood known by that time. The earliest finds dated back to 4th-3rd centuries BC. 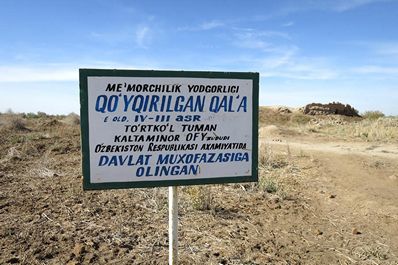 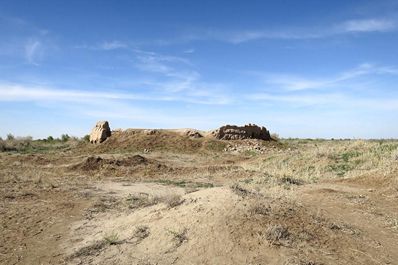 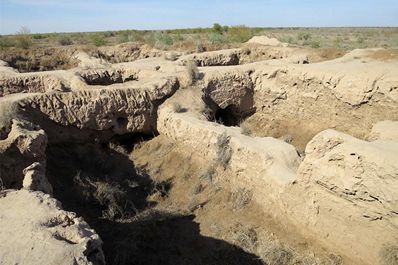 1950 marked the new stage of excavations at fortress ruins. The results revealed that the fortress had two stages of the development. Earlier stage dated back to 4th-3rd centuries BC. The second period of the fortress referred to the first centuries AD. It was revealed, that at early stages of development, the central part of the fortress was destroyed by a fire. It still remains a puzzle whether it was an arson or an accidental fire.

Koy-Krylgan-kala was the powerful well fortified fortress with a number of protective walls which were destroyed with time, it was possible to trace them only in a small site. Similar fortifications were peculiar to all monuments of antiquity and the early Middle Ages of Khoresm. According to researches of archeologists, the Fortress of Lost Rams is one of the most ancient monuments ancient Khorezm statehood, the temple complex that partially functioned as a burial of the unknown ancient king or queen.
The fortress population consisted of Zoroastrians, worshipping Anakhita, the goddess of water and rivers, and Siyavus, the god of sun. This monument is interesting in terms of the central complex location. Its western part was built in honour of the goddess Anakhita, and eastern and the southern parts were turned towards the sun rising in honour of the god of sun Siyavush, evidenced by number of figurines and relicts of vessels with images of gods.

The fortress history Koy-Krylgan-kala totals a millenium. The remnants of the most ancient ossuaries in the Central Asia were found along with paintings and inscriptions in ancient Khorezmian language. This fortress remains a historical puzzle until now, standing out with its unique design among other fortresses of Ancient Khorezm.