Musical Art of the Karakalpak

Music is a reflection of the people’s soul. It combines its history and traditions. It reflects the particularities of the ethnic group, its distinctive characteristics. The history of the Karakalpak is most brilliantly captured in its musical culture. All Karakalpak epos is imbued with the spirit of patriotism and pride for their country.

The singers zhirau and Bakshi predominate among the Karakalpaks. They are folk singers who perform their works in a special melodic manner playing on the national musical instruments. The Bakshi singers can be found in Khorezm, the fact indicating the proximity of two cultures.

Throat singing zhirau gained wide circulation in the end of the 18th century, when, in fact, the development of the Karakalpak literature and music began. Such famous Karakalpak poets-musicians as Djien-zhirau(1730-1784), Kunkhodzhi (1799-1880) lived and worked during this period. They were outstanding representatives of the Karakalpak musical and literary arts. Their accompanied their stories with penetrating music trill, which gave a tragic, inimitable twist to unique poems and epics, as many of these poems described a dark fate of the Karakalpaks who were forced to leave their home lands. 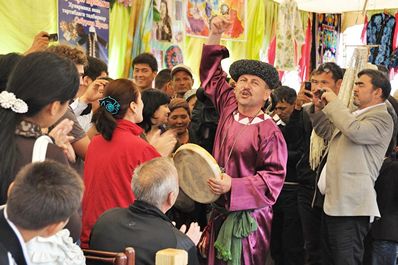 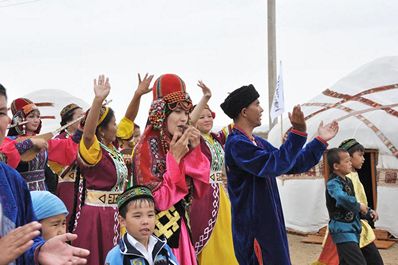 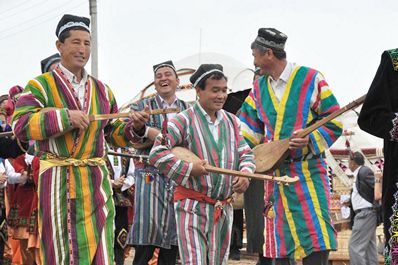 The Karakalpaks are freedom-loving people. In 18th -19th centuries they were fighting for independence from the Kazakh and Khiva khans. It is known that the Karakalpaks were defeated in the battle against the Kazakh khan Abulkhair. As a result they were forced to leave their home lands and move in the direction of Tashkent and Khorezm. A witness of these migrations, Jien-zhirau wrote the poem "The wandering nation", which reflected one of the darkest pages of the history of the Karakalpaks. And today, with deep respect Karakalpak zhirau singers perform this poem in memory of the great Karakalpak singer-storyteller Djien - zhirau.

Adzhiniyaz was one of the most famous poets of the Karakalpak people of the 19th century. He was a poet and Bakshi, who also performed his works to the sound of music. His most famous works include "Buzatau", which tells of the Karakalpaks’ piligrimage, "Dzhigits", "Other", which reflected his patriotic, humanistic and philosophical views.

Berdakh is justly considered to be a founder of the Karakalpak literature. Berdymurad Kargabay ogly (known as Berdakh) regarded Navoi, Fuzuli, Kunkhodzhi as his teachers. His creativity began with the reading of verses to the tune of dombra, when he was 18 years old. Throughout his life he composed poems and runes on patriotic and historical themes. The people loved him and rated him as one of the most skilled Bakhshi singers.

Karakalpak music is multifaceted. Karakalpak musical works are called kosik. It is a narration of poems or epics to the sound of music. They are divided into ritual kosiks: lullabies, funeral, wailing songs, wedding (synsu, bet ashar, korimlik). There's also a love-lyric and historical songs.

Zhirau throat singing is of great importance in the traditional music of the Karakalpaks. Zhirau singers perform mostly lyric poems and stories of historical and mythological character. Zhirau singer must be a poet, storyteller and musician at the same time. There are several schools of zhirau singers that have been forming over the centuries. Djien-zhirau school is the most famous one, it has been existing for over two centuries.

The main instrument of musical accompaniment Karakalpak zhirau is a string bow instrument kobyz. This instrument is of ancient origin, widely spread among the Turkic peoples. The string instrument is unique in its structure and inimitable sound. Two thick strings of kobyz are made from a variety of horse hair and make sounds, recreating the atmosphere of the East.