The Jami Mosque is the true decoration of Kokand's Chorsu square. Citizens cannot imagine their city without this magnificent mosque. It seemes that it was always on that site. And indeed, in historical chronicles of IX-XII centuries, there are mentions of the mosque in Kokand, which stood in the same place on the square Chorsu. But during the Mongol invasions the Jami Mosque, as well as the entire city, was destroyed.

However, the present mosque was built in the XIX century. In 1805, Kokand Olimhan started to build a mosque, but construction was suspended: the superior of the mosque stood up against the construction of mosque at the expence of funds collected by force from the common people. And only in 1814, enlightened and humane ruler of the Kokand Khanate - Umarkhan (brother Olimhana) renewed the construction of Jami Mosque. He invited the talented architect of Ura-Tube to oversee the construction. He had over 200 talented builders under his supervision. Two years later, the Jami Mosque was built. This was a truly monumental structure. The fame of its beauty dispersed far beyond Kokand. 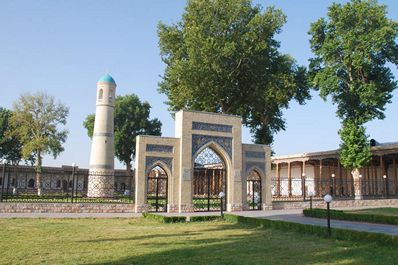 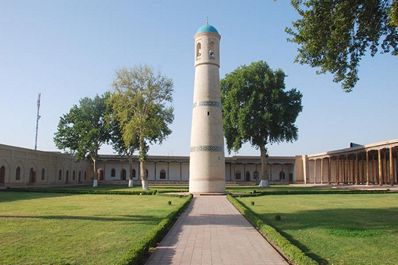 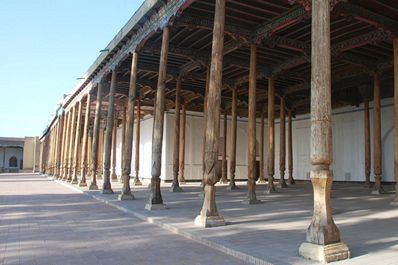 The western part of the vast courtyard of the mosque is occupied with khanaka and big aivan, the roof of which is supported by 98 columns. Columns of aivan is a special piece of art. They are finely painted in colors with the addition of gold. A khanaka is notable for its high painted ceiling. Walls of the mosque even today have preserved the filigree ganch carving.

On the perimeter of the yard there are khujdras, classrooms, because the mosque also included madrassah. The madrassa operated until 1918, and the mosque - until 1930.

In the center of the courtyard stands minaret of 22.5 meters of height, from which the muezzin called the faithful here to pray. Stone minaret with a smooth circular baked brick crowned with a faceted dome. From the top of the minaret one can see the whole of Kokand. According to legend, criminals and disloyal wives were thrown down from this minaret. Undoubtedly, the beauty and nobility of the architecture of the Jami Mosque aligns with the architectural monuments of Bukhara and Samarkand