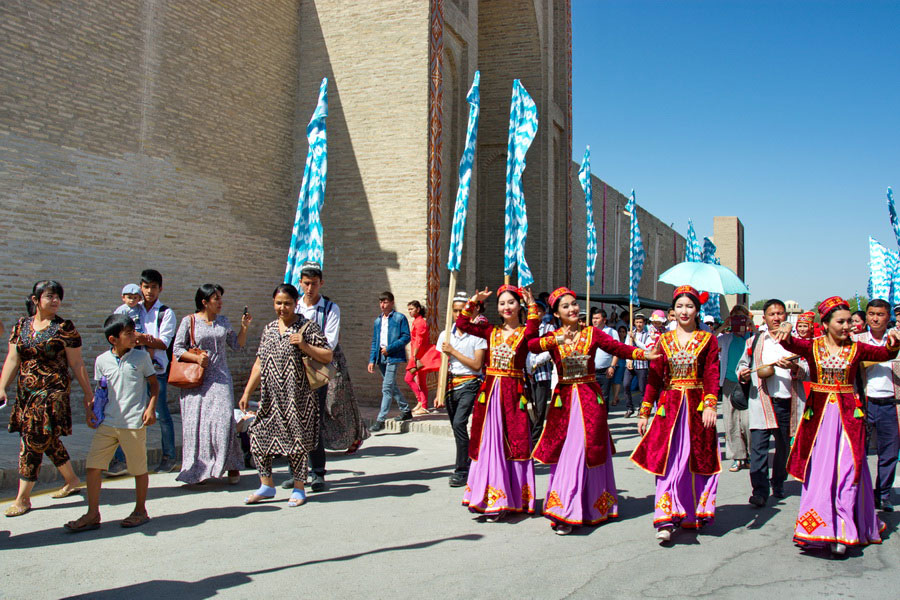 Such ethnic diversity of Uzbekistan people is due to various historical events that took place on the territory of Uzbekistan. Many representatives of ethnic nations of Soviet republics were evacuated here during the World War II (Russians, Tatars, Armenians, Byelorussians, Ukrainians, Germans, Jews and etc.). Representatives of certain nations were deported from their places of residence to Uzbekistan during Stalin’s repressions (Koreans, Crimean Tatars, Chechens and others). And even during the peace time, migration was active mostly concerning the youth, who participated in massive constructions and projects related to development of new lands, who later settled on those lands.

Uzbekistan today is the most populous country in Central Asia and is ranked the third-largest state by population in CIS after Russia and Ukraine. Uzbekistan population exceeds 31.5 million people (January, 2016). About 80% of population are Uzbeks, more than 10% are representatives of Central Asian nations (Tajiks (4,5%), Kazakhs (2,5%), Karakalpaks (2%), Kirgizs (1%), Turkmens and others). Other largest ethnic groups include Russians and other Slavic nations (10%).

Uzbeks are of a Turkic origin. Anthropologically it is the nation of mixed ethnogeny with Caucasoid and Mongoloid components. The formation of Uzbek nation is closely related to ancient nations of Central Asia: Soghdians, Bactrians, Sacks, Massagets and other tribes have been settling in Central Asian area and surrounding territories for many centuries. But the name Uzbeks appeared only in the 15-16th centuries. Today Uzbeks comprise the majority of Uzbekistan population. Also large populations can be found in neighboring Central Asian republics, Afghanistan, countries of CIS. By religion, Uzbeks are Muslims, mostly Sunni.

The Uzbek language is the only official state language. Though the major part of population can speak Russian as well. In some regions such as Samarkand and Bukhara, local people also speak Tajik.

Due to the hot and dry climate, the dominance of mountain and desert landscape in Uzbekistan, people resided unevenly, main life concentrating in oases. In desert areas of the republic the population density is very low. For example, in Karakalpakstan and Navoi regions, number of people per square kilometer gets up to 7-9 whereas the most populous region the Ferghana Valley numbers about 500 people per square kilometer. It is the largest rate of population density not only among CIS countries, but also in the world.

The urbanization process in Uzbekistan caused the increase of cities, and consequently urban population. Today in Uzbekistan cities reside more than 42% of the total population. The largest city is Tashkent. It is the capital of Uzbekistan with the population of over 2.5 million people. Tashkent is the administrative and business center of the republic. A lot of industrial enterprises and offices of large companies are located here. Tashkent is noted for its theatres, museums, parks. Other major cities include Samarkand, Bukhara, Khiva, Andijan, Ferghana, Navoi as well as Almalik, Angren, Zarafshan and Chirchik.The largest part of the Uzbekistan population is made up of rural residents. There is about 60% of the population living in rural areas. There are usually families with many children. The average Uzbek family consists of 5-6 people. According to centuries-old traditions and mentality of Uzbek people, family was and is one of the most important priorities in modern society.