Shakhrisabz is, above all, associated with the Ak-Saray palace. Many amazing legends are linked with the history of the palace's construction. According to one of them, Timur began to think of building a magnificent edifice, summoned an architect and set out his objective. After listening to the ruler, the architect asked to be allowed into the state exchequer. When permission was granted, the craftsman started to make foundation blocks from clay mixed with gold in full view of Timur.

Seeing that the ruler remained impassive, he broke up the blocks and returned the gold to the exchequer. When Timur asked: "Why did you do that?" the architect replied: "So as to make sure of your determination to embark on constructing a building that requires vast expenditure." A second legend recounts that, after the main building work had been completed, Timur began to tell the craftsmen to hurry up and finish the decorative facing of the palace. But they were in no hurry to cover the building with majolica and mosaic. When the angry ruler ordered the chief architect to be brought before him, it emerged that had vanished after hanging a chain in the centre of the palace's main arch. Since no other craftsman of equal stature could be found, the building remained unfinished. Some time later, however, the architect suddenly appeared and, after making sure that the chain on the entrance arch was now considerably lower, embarked on decorating the building. 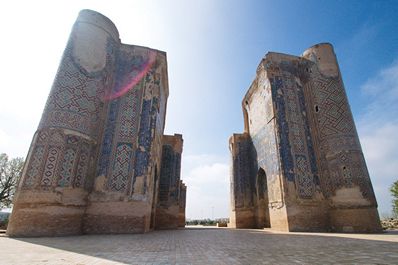 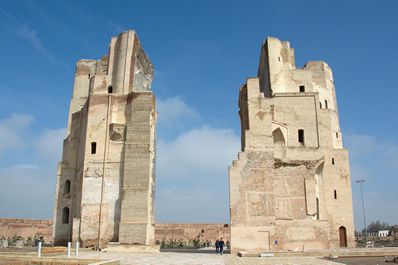 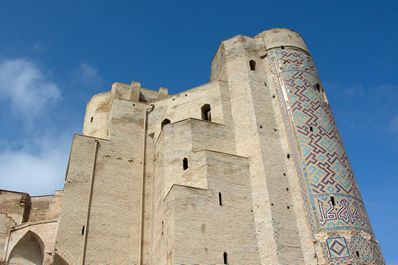 When Timur demanded an explanation of his strange flight and sudden reappearance, the architect replied: "I dared not disobey my sovereign's command, but I could not carry it out either. Stern punishment awaited me in either case, since such a majestic building had to settle and bed down firmly in the ground, otherwise all the decoration on it would be destroyed." The great ruler appreciated the craftsman's wisdom and resourcefulness.

The palace building in Shahrisabz took over a quarter of a century to construct. The Spanish ambassador, Ruy Gonzalez de Clavijo, who passed through Shahrisabz in 1404 on his way to the court of Timur in Samarkand, was astounded and charmed by the architectural miracle, and he left a detailed description of it, noting, however, that the splendid artistic decoration of the palace was still unfinished. The overall layout, scale and artistic appearance of Ak-Saray can be reconstituted from the descriptions of contemporaries and eyewitnesses, as well as from the results of archaeological excavation at the site. According to written accounts, the palace consisted of several stately, living or service quarters, grouped around separate courtyards.

The overall scale of the palace is impressive: the main courtyard alone, which has been reconstituted from the microrelief, was 120 - 125 m wide and 240 - 250 m long. The size of the other courtyards and of the outer perimeter of the palace has not been reconstructed owing to severe disturbance of the microrelief in the 15th - 16th centuries. Calculation of the proportions of the surviving elements of the site makes it fairly certain that the height of the main portal reached 70 m. It was topped by arched pinnacles (ko'ngra), while corner towers on a multifaceted pedestal were at least 80 m high. The main entrance portal was 50 m wide, and the arch had the largest span, 22.5 m, in Central Asia. 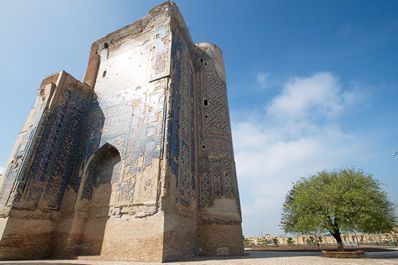 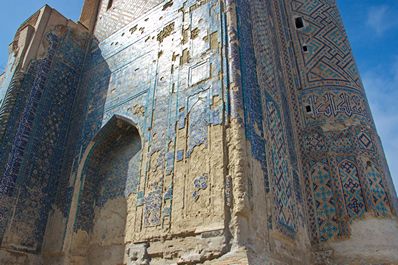 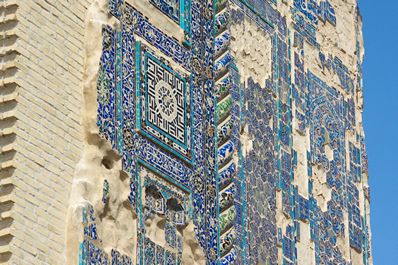 The architectural decor, featuring a wide variety of designs and colours, is particularly noteworthy in the artistic appearance of Ak-Saray. When using various techniques, however, the craftsmen bore in mind that the palace's main portal faced north, towards the capital, Samarkand. Given the poor light, the architects used only flat segmentation here and hence a continuous decorative treatment. The use of brick mosaic work, mainly dark and light blue in colour, forming large geometrical and epigraphic designs on a background of polished building brick, gives the portal a special softness of colour and an air of grand mystery.

The various mosaic and majolica work in the niche of the portal is particularly refined and highly coloured. The delicately executed foliate ornamentation incorporates exquisite calligraphic inscriptions of mainly Koranic content, although secular ones are found too. In the midst of the decorative facing, an inscription has survived, giving the date of completion, 798 (1395 - 1396), and the name of the craftsman, Muhammad Yusuf Tebrizi (from the Azeri city of Tabriz). According to Clavijo, who visited Ak-Saray, "in this palace was a very long entrance and a very high portal, and by the entrance, to right and left, were brick arches covered with tiles painted with various designs. Beneath these arches was what looked like small rooms without doors, and the floor inside them was covered with tiles. This was done so that people could sit there when the king was present. Beyond this was another door and after that a large courtyard, paved with white slabs and surrounded by richly decorated galleries. In the middle of the courtyard was a large pool. The courtyard was some 300 paces wide, and it gave access to a large house, in which was a very high and wide door, decorated with gold, azure and tiles of very fine workmanship. In the middle, above the door, a lion was depicted, lying in the sun, and exactly the same picture was to be found at the edges. This was the device of the king of Samarkand. After this, the envoys were taken to look at the chamber that the king had appointed for sitting and feasting with his wives, very spacious and luxurious. Before it was a large garden with many shady and assorted fruit trees. Inside it were many pools and artfully sited meadows. By the entrance to this garden there was such a vast space that many people could have enjoyed themselves sitting there in the summertime beside the water and beneath the shade of the trees. The workmanship in the palace is so luxurious that, in order to describe everything well, one has to go and examine it a little at a time."

The Ak-Saray palace is a grandiose piece of civil architecture, and not just by Central Asian standards. Historical tradition ascribes the destruction of the majestic edifice to Abdullakhan, who, during one of the sieges of unsubdued Shahrisabz, is supposed to have ordered the splendid structures of Timur and his descendants to be demolished. Be that as it may, of the once luxurious royal palace only the pillars and part of the arch of the main portal remained by the second half of the 18th century.