The Dor-us Siyodat ("repository of power") memorial complex was intended for the whole Timurid dynasty and was founded after the untimely death of Timur's eldest son, Jakhongir, in 1376. After his death his body was moved from Samarkand to Shakrisabz, the historical homeland of forefathers.

Several years later, Timur called the best architects and craftsmen from Khorezm and ordered them to erect the grave of prince the Jakhongir's Mausoleum. Timur's court chronicler, Sharafiddin Yazdi, wrote: "On both the right and the left-hand side of the facade of that edifice he ordered that the building of makbarats (burial vaults) and new khazira should be completed for the emir-zade Jahangir and other descendants and nobles." 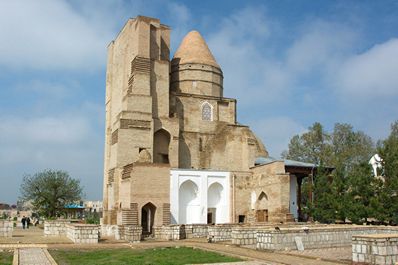 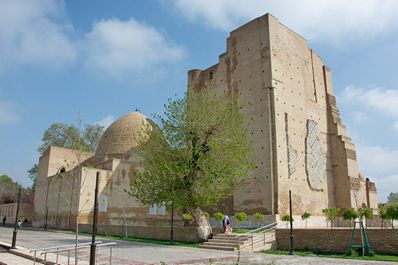 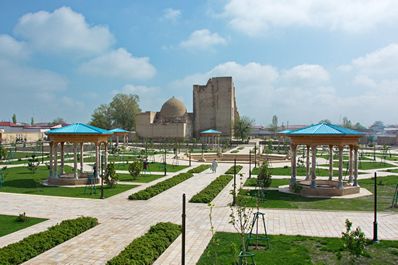 Timur's second son, Umarshaykh (Omar Sheikh), who was killed in 1393 - 1394 during the siege of the fortress of Kurd in Iran, was also buried in the Dor-us Siyodat complex in Omar Sheikh Mausoleum. The tomb intended for Amir Temur remained empty, because the fate willed that he was buried in Gur-Emir in Samarkand.

The Dor-us Siyodat buildings were destroyed when the forces of the Sheybanid ruler Abdullakhan II entered Shahrisabz in the second half of the XVI century, only the mausoleum of Jakhongir survived. The multi-chamber mosque of Khazrati Imam with a domed hall and a painted ayvan, or raised verandah, was built next to it in the mid - XIX century.