A small village Hodjikent is 70 km from Tashkent. Nearby, on the western slope of Chatkal ridge on the left bank of the river Chirchik, there is a rock with petroglyphs, which is located near a sacred spring. It has been a sacred place for centuries. People came here for help, in particular women, who prayed for health and for children.

Hodjikent petroglyphs were discovered in 1949-1950 by H. Alpysbaev. In the course of archaeological research in the headwaters of the Chirchik river, he heard from the locals about the legend of hoof tracks of the Caliph Ali’s horse imprinted in one of the stones. A detailed study of this phenomenon revealed that this petroglyph depicted argali horns. At that time there were discovered only 23 rock carvings dating back to the 1st millennium BC. Further study of this monument was continued by well-known Central Asian archaeologist, a specialist in large petroglyphs, M.Khuzhanazarov. Studies revealed new petroglyphs that have been carefully studied and added to existing ones. 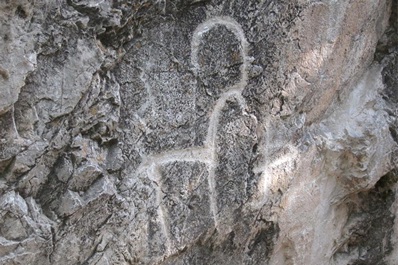 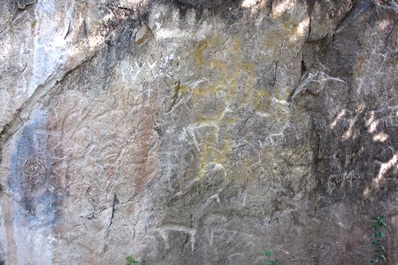 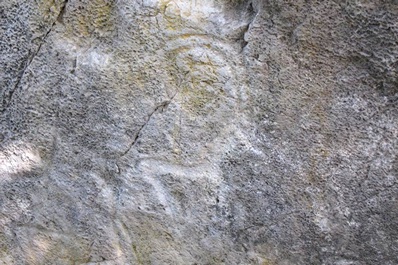 In addition there are some rock carvings of scenes. For example, the scene of the procession of mountain goats, repeated six times. There's also a scene of running goats and reindeers standing against each other.

Three figures of women are of a great interest. In Central Asia, similar figures have not yet been found. These drawings date back to Chalcolithic era 4th -3rd millennium BC. Another storyline related to Saka-Scythian period, the so-called "animal style" is a composition consisting of a goat and a human figure. Presumably this scene describes a sacrifice, because the goat front legs in the figure are connected.

The specific features of Hodjikent petroglyphs is that the surface of many of them is smooth. Some scientists suggest that this was due to touch of pilgrims to the sacred stones for centuries, but there is more rational explanation for this phenomenon. According to the scientist-archaeologist M. Khudjnazarov, the whole thing is in the technique of grinding the petroglyphs. Most likely, the masters carved the images in stone and then polished them carefully, and environmental conditions (rain, snow melting, weathering) completed the entire process.

Hodjikent petroglyphs are unique and of great interest for further study. Today anyone can visit these places and see the rock carvings left by our ancestors.