Saint Mesrop Mashtots Church (Armenian: Սուրբ Մեսրոպ Մաշտոց եկեղեցի) is an Armenian Apostolic church located 30 kilometers from Yerevan in Oshakan, a village in Armenia’s Aragatsotn Province. Saint Mesrop Mashtots, the creator of the Armenian alphabet, is buried in a cell under the main altar of this church. Because of his many good deeds, the Armenian people have great love and respect for Mashtots and his tomb, and anyone who wishes to learn more about the unusual Armenian alphabet and its creator will not want to miss this site. 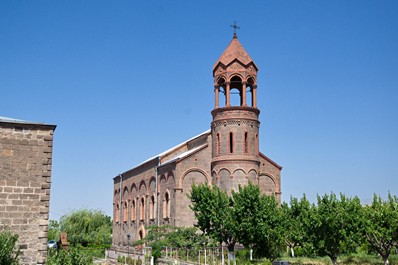 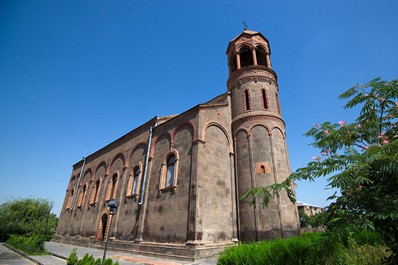 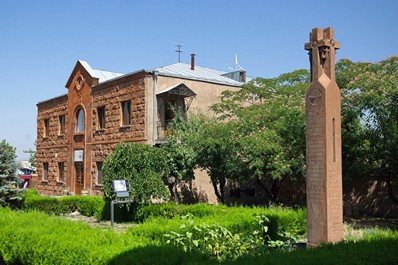 Saint Mesrop Mashtots (362-440) was an Armenian linguist and theologian best known for creating the Armenian alphabet in 405 AD. After his death, he was buried in Oshakan by a military commander and the country’s Chief of Finance. Three years later, a small chapel was added to the site.

Historical sources indicate that in 1639-1645 the church was renovated, yet two centuries later was again on the brink of collapse. Catholicos Gevorg IV of the Armenian Apostolic Church raised funds to rebuild it, with reconstruction lasting from 1873 until 1879. The following year a memorial was erected on the grave of Armenian nobleman Vahan Amatuni just outside the church.

The next milestone in the history of Saint Mesrop Mashtots Church was the establishment of a scientific school on the grounds in 1913. During the Soviet era it functioned as a public school, and only after the dissolution of the Soviet Union was the school building renovated. Currently it is a well-furnished, two-story building with domed halls, exhibition rooms and a library. In one exhibition hall, the works of famous Armenian artists remain on display. 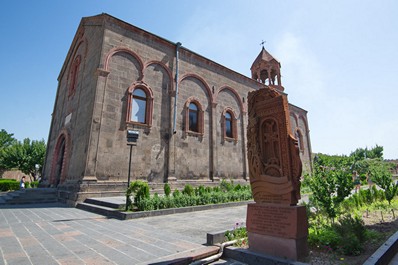 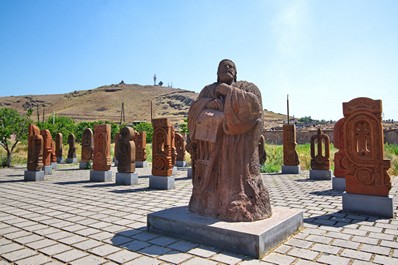 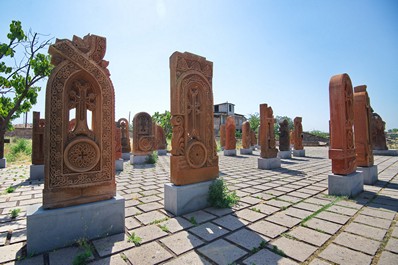 The complex of Saint Mesrop Mashtots Church consists of the main chapel, educational center, a belltower and a churchyard. The grave of Saint Mashtots is located in a cell under the main altar.

The oldest remains at the complex, discovered in 2012, are 5th-century ruins located near the bell tower. When Greek builders from Alexandropol rebuilt the church in the 19th century, they constructed the basilica with black tuff limestone. The church has three vaulted arches, an oval layout on either side of the elevated altar and rectangular apses. Its exterior is embellished with decorative arches, and entrances are present on the north, south and west. The church is quite large, with a capacity to accommodate 800 people.

In 1884, an eight-columned cylindrical belltower was added on the eastern side of the church. Thanks to its tubular design, it is considered a rare example of Armenian architecture.In the churchyard is a tall and impressive monument depicting Saint Mesrop Mashtots and each letter of the Armenian alphabet. Every year, parents bring their first graders from all across the country to see the statues. 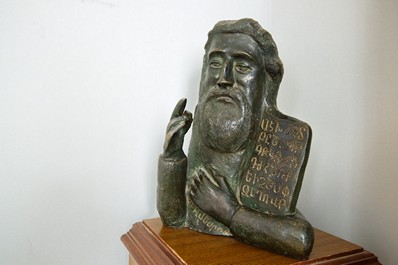 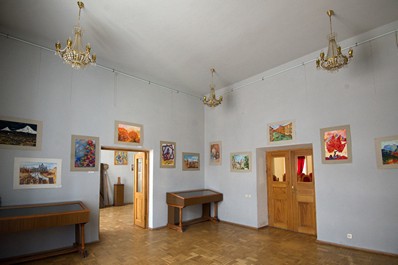 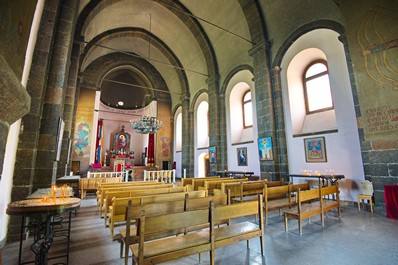 In 1961-1964 the interior of Saint Mesrop Mashtots Church was decorated with murals and a special fresco which portrays the creation of the Armenian alphabet and reads "Glory to the Armenian Letters and Literature”. The murals were created in a three-dimensional composition which coincides with the architecture. The fresco on the western wall depicts Mesrop Mashtots holding his alphabet creation. Depicted on the southern wall are kneeling archers who represent the guardians of Armenia, while eagles perched on their heads symbolize the strength and vitality of the country. The northern wall, with blossoming trees and cheerful girls, illustrates spring in Armenia.