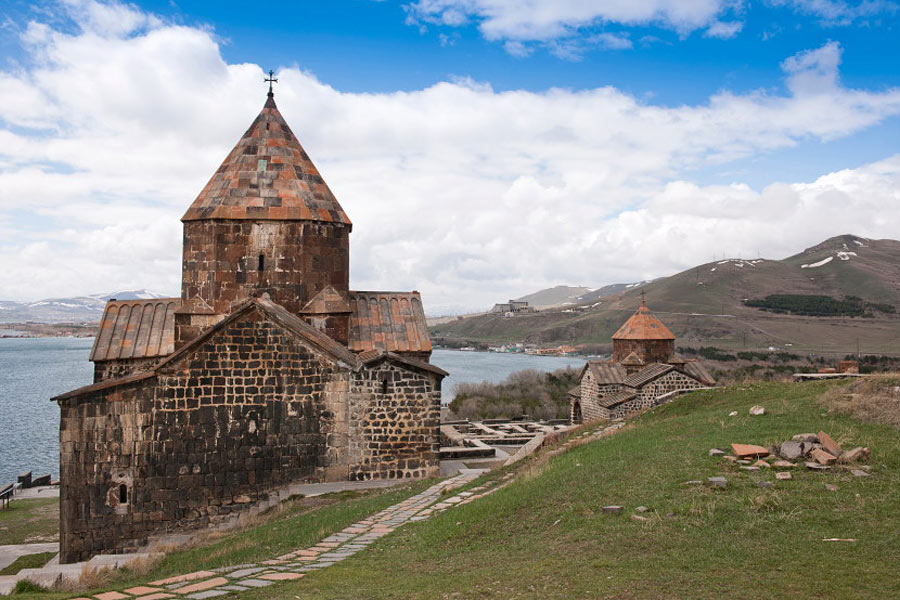 Tours, Attractions and Things To Do in Sevan

The city of Sevan is located on the north-western side of Lake Sevan, at height of 1,900m above sea level. It has a population of over 23,000 people. Sevan is a resort city and also the administrative center of the Sevan District in the Gegharkunik Province in Armenia.

The city’s history begins from 1842, when Russian settlers set up a small colony at the start of the Hrazdan River, which is the only river that flows from Sevan Lake. These settlers were called Molokans, and were part of a special sect that existed separately from other Orthodox churches. Initially the colony was named Yelenovka, after the wife of Russian Emperor Nikolai I. On January 3, 1935, the village was re-named Sevan in honor of the lake. In the second half of the 20th century, Sevan obtained a status of a city and began to develop quickly due to the construction of main traffic arteries and industrial undertakings. Today Sevan is one of the most important industrial centers of Armenia.

One of the city’s main places of interest is Sevan Lake itself. The lake’s area is 1,240 squre km; its maximum depth is 80 m. Sevan National Park was set up on its lakeside in 1978. Sevan Lake is a lake of tectonic origin. It is surrounded by several mountain ranges. Sevan is the world’s second largest lake according fresh water deposits and the largest in the Caucuses. In sunny days the lake, like a mirror, reflects the blue sky and snowy mountains and in overcast days is more calm and sad in character.

The name of Sevan comes from ancient times. There are several theories connected with its origin. For a long time, it was believed that its name originated from the name of the Sevanavank Monastery, but archeologists managed to discover an ancient inscription on a stone dating to the 9th century BC, which gave its Urartu ancient name “sunia”, which translates as “a lake”.

Another place of interest in Sevan is the medieval Sevanavank Monastery, located on a peninsula, 3 km from the city. The Monastery is a complex of small buildings constructed in the 9th century. The monastery’s history begins from the time when several monks settled on the isle (now connected to the shore to make a peninsula) and built several cells and a chapel. Step by step the number of the monks increased, which is why in 874 Princess Mariam, a daughter of king Ashot I Bagratuni, ordered to build a monastery. The monastery is also known as the place where King Ashot stayed before a battle with the Arabs, while the battle itself took place not far from the monastery’s walls. Up to today, only several small churches and fragments of cells have survived from the whole monastery.

To the southwest of the city of Sevan there is one of the most ancient archeological monuments of the Urartu period of Armenia – Lchashen. Lchashen is famous for its archeological complex consisting of a fortress, mounds and ruins of the ancient city. The archeological excavation of the complex started only in the middle of the 20th century, when the level of the lake sank, because before, it was under water. The most ancient occupation layers revealed under the city date back to the 3rd millennium BCE.

Sevan is interesting not only because of its history and attractions, but also because it is one of the most developed Armenian tourist centers. It is the place where hotels and various recreation centers are located. The city is also famously a growing center for water and beach sports, such as volleyball and windsurfing. An Aqua-Park was also built in the city. An equestrian club for equestrian sport fans and modern tennis courts for tennis players were also built there.