The jewel of medieval Armenian architecture, Tatev, was constructed in the 9th-13th centuries. In the past, Tatev was difficult to reach, because the winding road had to descend the steep walls of a gorge, and cross a river on the Devil’s Bridge, but now Tatev is easily accessible by the world’s longest reversible cable car.

Tatev Monastery is in the centre of the Marz of Syunik, near the village of Tatev, on a cliff overlooking the right bank of the Vorotan River. Such a remote position was strategically favorable as the monastery was simultaneously the religious and political centre of Syunik Principality, and needed to be defended. The monastery was also the residence of the Syunik Bishop with his vast lands and craft workshops. Tatev collected taxes from hundreds of villages, making it a rich monastery and educational institute. 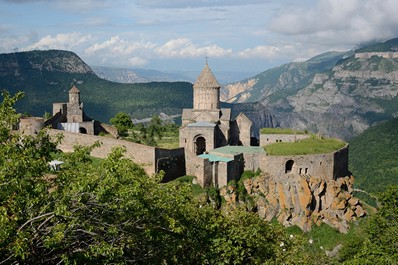 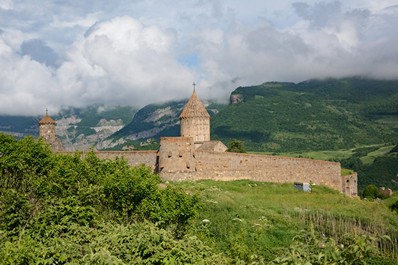 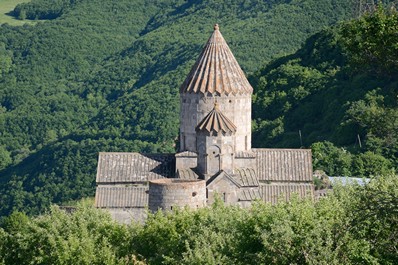 In the 13th-14th centuries, the monastery prospered. During this time, Tatev University was the largest centre of philosophy and science of medieval Armenia. Students studied philosophy, theology, physics, mathematics, astronomy, medicine, architecture, history, grammar, literature, calligraphy, music, and painting, for an average of seven to eight years. The library held 10,000 manuscripts, all of which were destroyed in a single day during the Mongol invasion in the 13th century. European scholars would have been jealous of the freedoms that Armenian scholars had, as they were able to study with relatively little interference from the church.

The monastery was named in the honor of St. Eustathius, a student of St. Thaddeus. Thaddeus, or Jude, was traditionally credited to be one of the first to preach Christianity in Armenia, alongside St. Bartholomew. St. Jude is now the patron saint of Armenia.

The oldest parts of the church date back to the 6th century, with a belfry and copper bells made in the 14th century. The monastery was practically destroyed by an earthquake, but it was restored in the 17th century. Following the invasion of the Persians in the 18th century, Tatev was abandoned.

Today, the architectural complex is presented to us in all its greatness. The center of the complex is occupied by St. Peter and Paul Church (Surb Pogos Petros), the main and largest structure of the monastery. 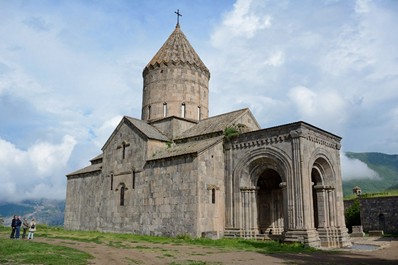 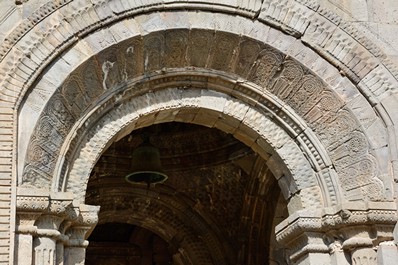 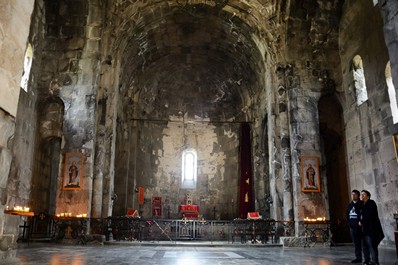 The church looks as if "growing" on the entire perimeter from the stone base, which gives a special grandeur to the composition. The first temple was constructed here in 906. The architecture of the cathedral is a little archaic; however, there are also some new forms present in the design. Especially noticeable are big external volumes of the church dome, and the high round drum topped with umbellate dome. The bas-reliefs decorating the windows are interesting - each of them is a human face with snakes' heads facing them. The huge cathedral used to be painted with frescos, which have partially survived. The frescoes were done with help from French students, who came to Tatev on the earliest of exchange programs.

The most ancient church is St. Gregory the Illuminator Temple. It was constructed in 848 by the Syunik prince Pilipos; he also presented Tatev village to the monastery. The temple adjoins the south side of the main cathedral, St. Peter and Paul Church.

One of the most unique monuments is a column called Gavazan. This was originally a pagan monument, built to line up with Orion’s Belt on August 11, when Armenians used to celebrate the New Year. This date is special, since Orion’s Belt is perfectly vertical on this date. When the column was rebuilt in 904, religious figures explained that the three stars of Orion’s Belt represented the Holy Trinity, though the pagan history was hard to miss.

St. Astvatsatsin church-over-the-gate (1087) is a rare example of Armenian architecture in terms of its location. It has a small domed hall with niches on every facade, except for the western one, with a tapered umbrella-type roof.

The St. Peter and Paul Church is surrounded by the rooms of the prior, belfry, vaulted refectory with a kitchen, pantries, dwellings and premises built in the 7th-18th centuries. 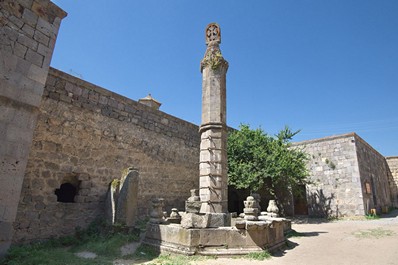 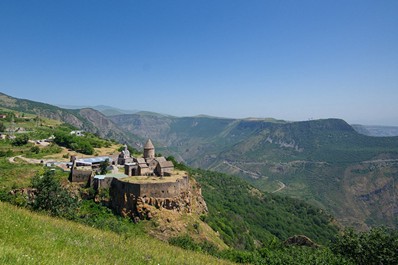 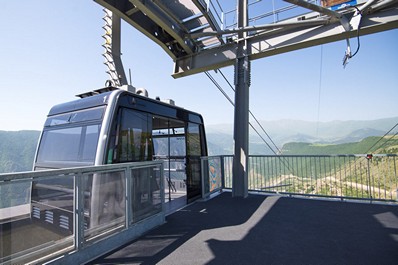 In 2010, the cable car was built from a nearby Halidzor to Tatev Monastery. Called Wings of Tatev, this cable car traverses over 5.7 km (3.5 miles) in about 15 minutes. The cable car was originally built to bring visitors to the region, and to make the remote Tatev Monastery a little closer. Thousands of tourists ride the Wings of Tatev every year, especially important given that the ticket money goes towards restoring the monastery and improving tourism in Tatev.

Silently floating over the surrounding mountains, Tatev Monastery is very impressive. The labyrinths of the narrow passages leading from spacious halls to other premises of unidentified purposes, the outlines of niches showing through the darkness, stone staircases, and arched doorways to nowhere give visitors plenty to explore. Standing on the edge of it takes your breath away - somewhere down below the river flows and crowded velvet green hills stand in silence.