In 1968 at the foot of the Arin-Berd hill the Erebuni museum opened the doors to its first visitor. The event was timed to the 2750th anniversary of the Erebuni city. The custodian of historical artifacts holds valuable and unique samples of the Urartian culture.

There is a huge bas-relief (low relief) with the image of the King Argishti I (of Urartu), the founder of the city, above the central entrance of the museum. The museum displays vver 1500 exhibits found during the excavations of the ancient fortress in 1950-1959. The collection also includes the presents Yerevan received in honor of the 2750th anniversary. Tourists visiting the museum are mostly interested in the exhibition of the ancient cuneiform, armor and cold steel, items and jewelry from agate and glass, bracelets from bronze, coins of the Cesar August, silver ritons (vessels for drinking).

The city of Erebuni has a very interesting history; in addition, the fortress with the same name is one of the most ancient citadels in the world. 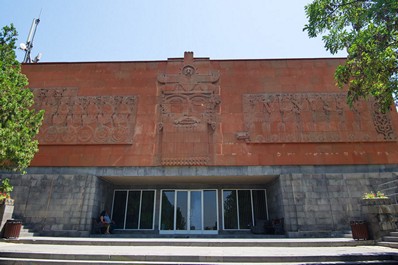 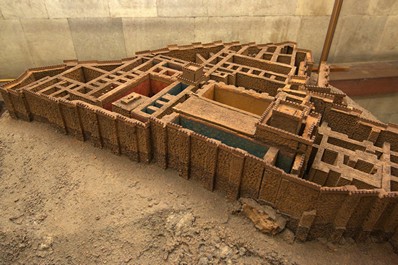 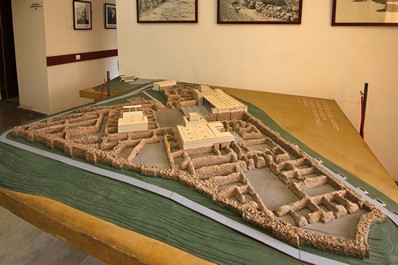 The history of the Erebuni city

In 782 B.C., the King Argishti I of Urartu, decided to build a city with a fortress on the Ararat plain with a strategic point of defense. Residents of the country, who had good skills in construction of artificial drainage channels, brought water to the city. Erebuni turned into a blossoming garden within a few years.

The city had been the only one in the entire valley for a long period of time, but later, Agrishti I built another big city – Argishtikhinili, that was used for economic purposes and did not serve as a strategic point.

Thus, Erebuni was on the territory of the present Yerevan; scientists suggest that it was the ancient Yerevan, and the year 782 B.C. can be considered the establishment date of the current capital of Armenia. The names “Erebuni” and “Yerevan” sound alike indeed.

At the foot of the Arin-Berd hill the main residential quarters of the ancient settlement were situated, a citadel - on its top. General territorial area of the city was around 200ha (2 mln sq.m). During the diggings, archaeologists managed to discover bits of Urartian ceramics on the neighboring hill, thus it is supposed that nearby territory also was a part of Erebuni.

Location of the fortress was not chosen by the King accidentally. The top of the hill provides an excellent view of practically the entire Ararat plain and the main roads of the region. The citadel had a triangular shape and was 65m tall. In order to erect the fortress, the Arin-Berd hill was leveled in advance. The total area of the strategic object was more than 8 ha (80 000 sq.m). 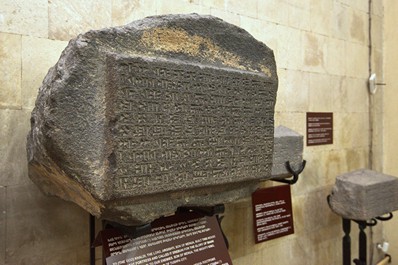 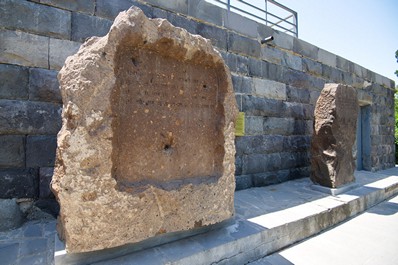 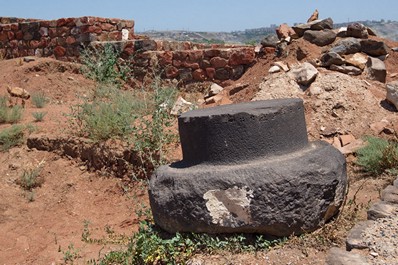 The fortress had only one access from the southeastern part, since there were steep cliffs from other sides. In its foundation archaeologists discovered inscription of the King Argishti I about the establishment of the citadel.
On the territory of the fortress there were temple of the God Khaldi, temple of “Susi”, granary, residential rooms for warriors, small household constructions, wine cellars.

Unique architecture of the Erebuni fortress

The external part of the wall consisted of 2-meter plinth laid with the basalt stones. Sometimes they even used tuff. Above the plinth, there was a wall from raw brick of 7m in height. Every 8 meters the wall was strengthened with 5m wide counterforts. In order to bolt basalt and brick layer, builders used the mud mortar. Scaffolding around the fortress fortified the foundation and helped the guards carry out their rounds. Unlike later constructions in Urartu, lower parts of the walls did not enlarge.

Practically in all rooms of the citadel, the floor was lying on the rock foundation. Uneven parts were covered with tie-rod from mud mass 10cm thick, and then laid with bricks; in the residential rooms a layer of wood was added as well. All inner constructions of the fortress were also from basalt foundation and brick walls. Doors and covering of the rooms were made mainly from wooden timber. Roofs of the buildings were done from wood and covered with reed on the top.

Special attention deserves the temple of Khaldi in the Erebuni fortress. It was one of the biggest temples in the entire Urartu. The sanctuary comprised of four parts: big hall, subsidiary rooms, square tower with a staircase and U-shaped courtyard. Floors in the church were laid with small wooden tablets, similar to present parquet.

The architecture of the peristyle (column framed building with internal garden) yard of the temple was not typical to the Urartian style, rather close to the eastern constructions. The roof of the yard was supported with 12 columns; the floor was laid with shallow cobblestones, and beneath was the water drainage system. Inner walls were of blue color decorated in paintings and murals.

The “Susi” temple was much smaller. It consisted of one inner room and a little yard. There was an altar for sacrifices deep inside the shrine. The ceremony of sacrifice was connected to fire, with a hole in the ceiling of the temple for the smoke to go out, that also served as a source of light. Walls of the shrine were also adorned with painting.

Erebuni after the fall of Urartu

After the fall of the state of Urartu in the 6th century B.C. and in the following period, Erebuni continued its existence as a city of early Armenian and Hellenistic periods. Archaeological items discovered there proved it.

During Achaemenids rule, a number of constructions in the fortress were re-organized: the temple of Khaldi was transformed into a multi-column hall. The peristyle yard of the Susi temple was redone; as a result, the entire plan of the fortress was amended. All these erections suggest that Erebuni had kept the role of the administrative center in the Ararat plain even over the following centuries.

The museum holds all items and unique artifacts found by archaeologists during the excavations of the ancient city, as well as on the neighboring territory of the city Teyshebaini. To release the museum from the narrow focus, there were collected other historical exhibits from all corners of Armenia.
For some time, excavation works on the territory of the citadel were suspended, but later resumed. Most parts of the fortress, as well as inner constructions, were restored. The fragments of the buildings that reached us in a rather good condition were left in original in order to demonstrate the visitors all subtleties of ancient Urartian brickwork.
It is surely to say, this is one of the most interesting monuments of the architecture that present Armenia is proud of and further archaeological studies will discover new mysteries of Erebuni.