The story of a person who had built a city 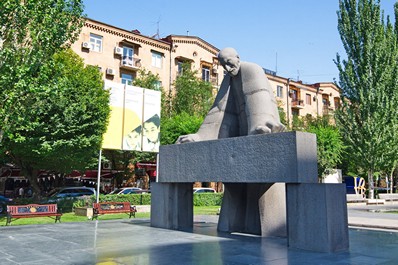 The city of Yerevan owes its look to Alexander Tamanyan, the artist, people’s architect of the Armenian SSR and the Honored academician of architecture. He was the author of the general plan of design layout of the Armenian capital. Since then and up to now, numerous buildings created by Tamanyan adorn the city and preserve the memory about the outstanding specialist.

Short biography of A. Tamanyan

Tamanyan comes from Rostov region, the city Yekatirinodar (now Krasnodar). Alexander was born in 1878, on 16 March, in the family of a common banker. In 1888 he was accepted to the Alexandrovsk school of Kuban and had graduated it with flying marks in 1898.

Later, a young man continued his education and entered the Architectural department of the Academy of Arts of Saint-Petersburg.

It was already in 1902 when Tamanyan had succeeded to apply his knowledge into practice by working in the master studio of Professor A. Pomerantsev. During that period, he created few small constructions on the Smolensk Armenian cemetery. His first works were done in the spirit of neoclassicism, so much popular at that time.

In 1904, Alexander graduated from his studies and became a specialist. Since then and for the next 15 years, Tamanyan had dealt with a broad architectural-construction activity across the entire Russia, especially in Petersburg.

In 1923, he moved to Yerevan where he had led the project on building the capital of Armenia. This was the first steps of erection of Yerevan. Few know, that the main architect had used the most progressive method of city building – “planning of solar rays” into the foundation of the city plan.

Following projects in Yerevan belong to the work of Tamanyan:

Among the works of the architect in other cities of Russia, it is to mention the reconstruction of the Armenian Church on the Nevskiy prospect (Avenue) in Petersburg (1904-1906), House of Prince Sherbatov on Novinskiyboulevard in Moscow (1911-1913), Kochubey mansion in Tsarskoeselo(1911-1912), central workshops of Kazan railroad in Lyubertsi (1916). This is only the part that Alexander had managed to accomplish.

A.Tamanyan passed away in 1936. He lived 57 years, and dedicated most part of his life to beloved work. His name remained eternal in architectural erections created by his talented hand. In 2001, there was a museum opened in the honor of the great architect.

The museum is completely dedicated to the life and works of the outstanding architect. Here you can see photos and models of all buildings projected by Tamanyan. The main exposition is the general plan of Yerevan approved in 1924. The development of the city had started from these drafts, and is continuing today. Some ideas and plans that Alexander did not manage to realize during his life had been finished and applied by his followers. There is also a monument in the center of the capital city in honor of the architect.

After visiting the museum, you will learn so much about the history of city planning not only of Armenia, but the entire Post-Soviet space.