Trip to the Heavenly Empire in the Footsteps of Marco Polo 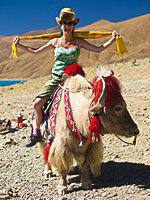 China, known to everybody as “World’s Factory” is not only a huge state with thousands of plants and overpopulated cities , whose total population exceeds one billion people, but also one of the most interesting and various tourist centers. The third largest country (after Russia and Canada), it has everything that can be interesting to a foreigner: architectural monuments of one of the most ancient civilizations, national parks with different climate and nature, modern metropolises and small provincial towns which managed to preserve their original culture, amazing sand beaches and inaccessible snow-white mountain tops.

Over the past 30 years an inrush of tourists has grown by many times and today China ranks the world’s 6th in number of tourists. However, China was used to be one of the most closed-off countries for tourists. It was not until the end of the 1970-s when the situation considerably changed, the government even took profound measures. For example, in year 1988 Hainan isle in the southern part of the country was granted a status of a province, and tourism became a priority industry in its economy; the factories were moved from the coast to other regions, while the beaches were developed to compact worlds. Nowadays China keeps on attracting tourists, implementing reforms in the sphere of visa regime etc.

China tourism packages are the selection of suggested tour itineraries that were put together to help you to plan your trip. China is a tourist friendly and safe country. You can travel independently on your own by doing your homework using travel books, information available on the internet and using our suggested tour programs on our website. You can also request Advantour to put together your China tourism package to save time and have an optimal itinerary to fit your requirements. We will utilize our local knowledge and experience to prepare the tailor-made private tour itinerary that will fit your schedule and interests. Our itineraries take into account feedbacks we get from our past travelers and latest developments in tourism. You can also signup to one of our escorted small group tours that have guaranteed departure dates throughout the year. These tours are very popular, allow to save money by sharing costs with other group members.

Cultural tourism in the tourist sphere in China, as in many other countries, holds a high position. The country with the history numbering more than one thousand years, has a great many of monuments belonging to different dynasties ruling as far back as BC, pilgrimage destinations of Buddhism and other religions, colossal sculptures and temples, and the Great Wall of China, one of its visiting cards. Furthermore the architecture and cultural features within the country differ considerably depending on the region.

An integral part of cultural tourism in China is ethno tourism. The country is inhabited with dozens of ethnos featuring their own national costumes, customs, cuisine and even languages. And although the Chinese themselves account for 93 percent of the country’s total population, they differ province by province. The tourists will be able to learn more not only about the culture and way of life the Chinese, but also about their unique life philosophy so different from that of the West.

Like the mentality of the East differs from that of the West, so does the Chinese folk medicine from the western one. This fact causes special interest to health tourism in China. The knowledge accumulated by Chinese healers for thousands of years, even now, help dozens of thousands people who suffer from acute and chronic diseases. Chinese doctors are armed with medicinal herbs, healing springs, different kinds of massage, acupuncture and so on. Furthermore, you can just boost immunity and keep body in tone.

Along with that, China, though cannot be considered as environmentally stable country, due to the numerous plants and power stations, has its national parks, which managed to preserve unique nature. The flora and fauna of the Heavenly Empire differ from those of the other parts of the world; there, you can see different native zones and amazing animals. Some species of animals are under special control: needles to say that panda is one of the China’s national symbols.

Along with it, ecological tourism in China works excellently with active tourism. One of the popular tourist places is National park in Zhangjiajie, with vertical mountain cliffs rocketing sky-high. There, you can get a supply of adrenalin, having taken a walk by a glass path, running along the Tianmen mountain krantz, or by a narrow wooden path on holy Hua Shan mountain.

For those who wish to travel among the snowy mountains there is a road in Tibet. Furthermore a railway service between Beijing and Lhasa has been recently arranged. So a trip to the world’s highest peaks has been considerably simplified.

Special attention must be given to domestic tourism in China. Since the majority of the country’s working population has no free leave schedule, the government has arranged a system of festival holidays, when the people can travel in the country. Three periods within a year called as “golden weeks” fall on New Year, 1 May (Labor Day) and 1 October (PRC National Day). These days the prices for tickets and hotels skyrocket several times, and cultural and historical places are flooded with local tourists. Foreign tourists have to take into consideration these factors when planning trips to China.

Finally, shopping-tourism in China should also be taken into account. Everybody knows that a major portion of the world’s products and goods is labeled “Made in China”, naturally, all these goods’ cost is cheaper by an order in the source nation. In fact, many things at the best quality-price ratio can be found in major cities of China flooded with boutiques and shopping centers. Along with this, a wide range of souvenirs to fit every taste: objects of interior in Chinese style, various vases and sculptures, knick-knacks, accessories and so on can be bought there as a keepsake to remember the trip to the Heavenly Empire. In a certain sense, China can be called “Mecca” for shopaholics.

Tourism in China: the Most Popular Tourist Places

China is too large to study it for 1-2 weeks. Based on tour-operators’ recommendations and your own impressions, you can choose very different routes to the Heavenly Empire. The most developed tourist directions may be divided into two parts: the central region, including historical sights and modern metropolises such as Beijing and Shanghai, and surrounding provinces where the traveler can learn about Chinese nature – from picturesque national parks to well-groomed beaches on the cost of the South China Sea.

However, along with the popular directions you can choose trips to Tibet or north-western provinces, which once were located on the Great Silk Road.

Tourism in China: from Origins of the Great Silk Road

Ages and ages ago the first travelers, who visited China were moving along the routes of the Great Silk Road. Before this, the Heavenly Empire and Central Asian countries seemed to be separated by insuperable mountains and horizonless deserts. But owing to an occasion, a communication among the countries was arranged, and trading relations were established. Over several millennia, China was transporting silk, whose manufacturing know-how was kept as the country’s great secret, and the West was bringing different goods, such as cotton, seed and even ivory, produced in Africa.

Thus Chinese provinces Xinjiang, Gansu and Shaanxi were beginning to assimilate the culture of Central Asia and far-abroad counties. Today they are amazing lands with mixed Chinese and Turkestan cultures, while most different nationalities who live there add a special entourage to them. This region considerably differs from the other provinces of China.

Going on a long journey to Asia, the best option will be to act as Marco Polo of modern time and follow his route from the West to the East through Turkmenistan, Uzbekistan and Kyrgyzstan to one of the most beautiful and enigmatic countries of the world.