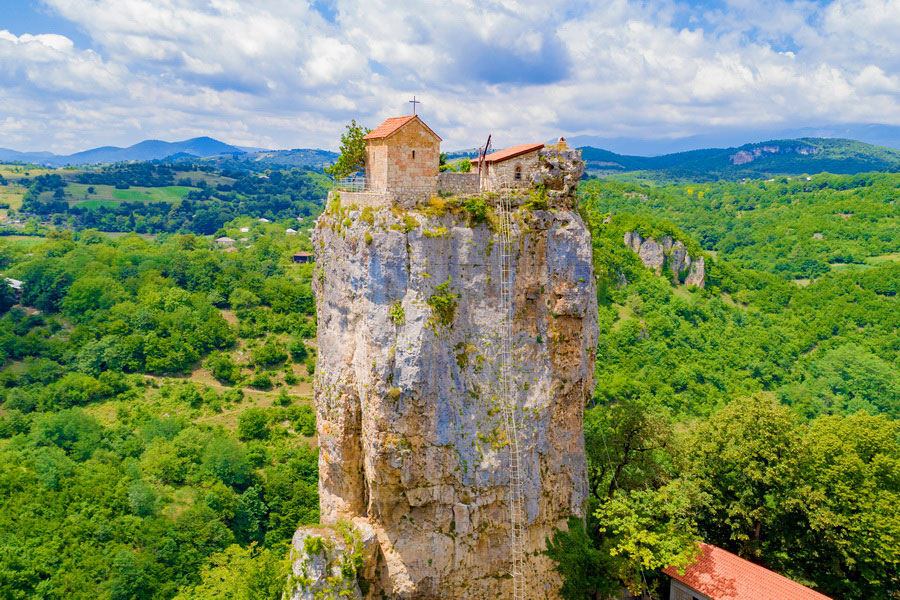 Katskhi Pillar remains one of Georgia’s most mysterious sights. Located 11 kilometers from the city of Chiatura in western Georgia and 220 km from Tbilisi, it towers over the gorge of the Karshuna River. This natural 40-meter-high limestone column has been standing for centuries as a silent witness of history and has itself been the inspiration of endless lore among locals.

While Katskhi Pillar legends abound, the first historical reference to this column was provided by the 18th-century Georgian historian and geographer Vakhushti Bagrationi. He theorized that the pillar, which had already been long abandoned in his day, had served as a temple of fertility during the country’s pagan era. Soon after the Christianization of the land in the 4th century, the pillar became a symbol of this new religion. A carved cross at the bottom of the column dates back to the 6th century and seems to support this assumption of Katskhi Pillar. How it was built upon such a high precipice without the aid of modern equipment, however, remains a mystery.

During the same period, a new type of Christian asceticism known as stylitism appeared in the Middle East. Stylites, also known as pillar-saints, were religious devotees who lived on pillars to spend their lives praying, fasting, and preaching. Georgia maintained strong ties with the Middle East during this era, and thus this newly Christianized country started to adopt the practices of ascetic monasticism from the Middle East and the Byzantine Empire. The Katskhi Pillar’s location and height proved the ideal setting for monks wishing to isolate themselves from the rest of the world and devote their lives to God. 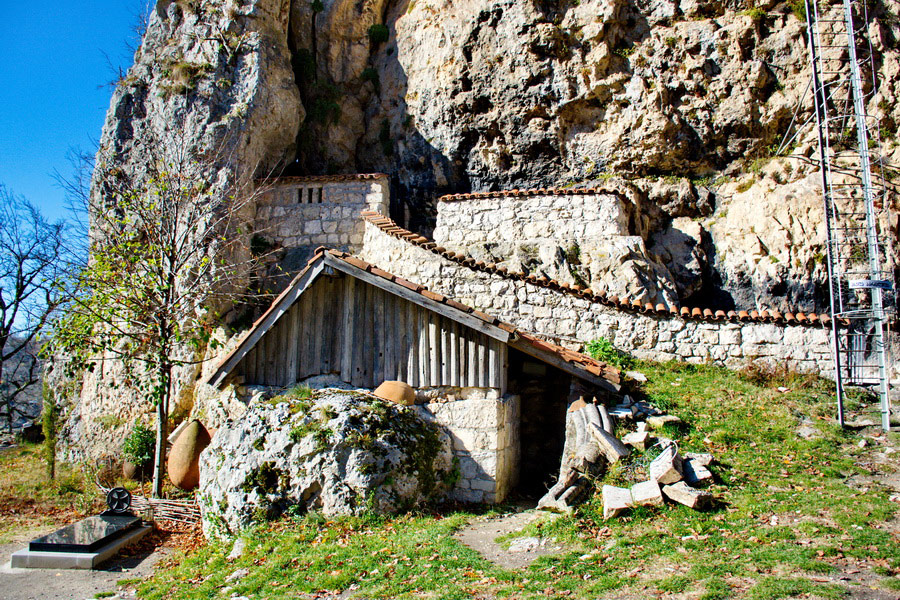 In 1944 a small group of alpinists and archaeologists climbed the abandoned Katskhi Pillar. Upon reaching the top, the expedition discovered the ruins of two churches dating back to the 5th-6th centuries, cramped living quarters for monks, a few qvevris (traditional Georgian clay vessels for storing wine) and the bones of a long-deceased stylite, now commonly referred to as the Katskhi Pillar skeleton. Upon such a discovery, scientists started actively exploring the site, and additional expeditions and archaeological excavations were organized.

One of the most interesting artifacts found on the pillar is a limestone plate dating back to the 13th century. On the plate is an inscription stating that a man named Giorgi built three cells for monks at the top of the pillar in order to gain absolution for his sins. Historians, however, remain baffled by the pillar and its monastic remains –while most historians agree that the pillar was abandoned by the 15th century, it is still unknown precisely when and why the stylites deserted the pillar.

In 1990 a local monk named Maxime Qavtaradze, impressed by this stunning and mysterious abode, decided to revitalize the monastery atop Katshki Pillar. With permission from the Catholicos-Patriarch of Georgia, Ilia II, and assistance from alpinists, local residents and the Georgian government, Qavtaradze restored the ancient churches and cells. Although faced with many difficulties along the way, Qavtaradze managed to obtain his goal of resurrecting the spirit of piety which pervaded the pillar in times past. While the church and cells atop the pillar were restored, an additional church and living quarters were constructed at the foot of the pillar for additional monks.

Since restoration was completed, monastic life has returned to Katskhi Pillar. Monks who reside here pray every day for seven hours, including a night prayer from 2 am till sunrise. The monastery’s doors remain open for men who are facing difficulties and seeking spiritual direction. However, climbing the pillar has been forbidden since 2018, with the exception of the monks who reside at the site and make the ascent daily in order to pray at the top and be closer to God. A 40-meter iron ladder, known locally as the “ladder to heaven”, was installed for the monks’ convenience. Climbing the ladder takes about 20 minutes.

Visitors are allowed to ascend to the first level of the limestone pillar, where they can light by a 6th-Century cross. 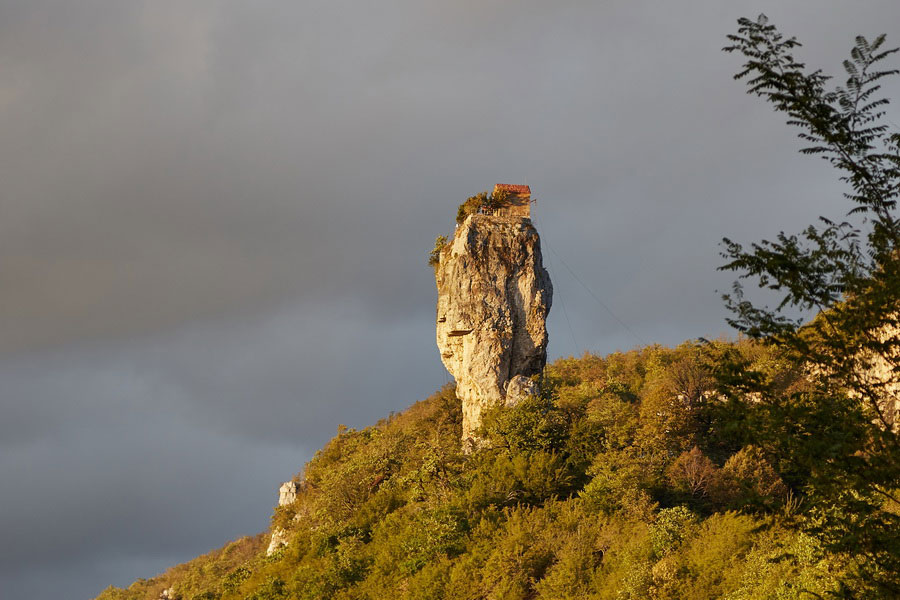 Maxime Qavtaradze has been living atop the pillar for more than 25 years, a 21st ascetic who continues in the traditions of the old stylites. While he lives in solitude and silence, he usually climbs down the ladder once or twice per week to participate in church services and counsel people who come seeking help and guidance.

Katskhi Pillar is an alluring place not only for pilgrims but also for international travelers. Along with the city of Chiatura, it has become one of the main touristic destinations of Georgia’s Upper Imereti region as its fame has slowly spread around the world, although even gorgeous Katskhi Pillar pictures fail to do it justice. It’s approximately 200 kilometers from Tbilisi to Katskhi Pillar and 70 kilometers from Kutaisi, so arranging a day trip to the pillar is possible from both of Georgia’s largest two cities. Traveling to the top of the 40-meter-high Katskhi Pillar, however, will require much more time and effort – any man who is fortunate enough to get permission to climb the ladder must first pass through rigorous examination, living in a cell with the monks for at least a week and participating in all religious rituals with them.

Katskhi Pillar remains one of the most isolated and unusual churches on the planet, a memorable must-see for anyone passing through western Georgia!