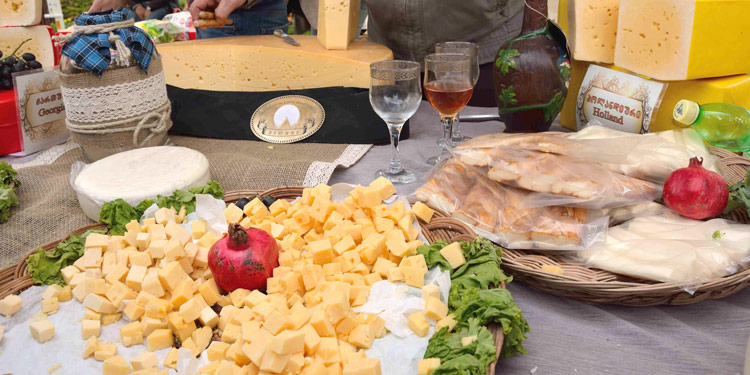 These convivial gatherings often last from early afternoon well into the early morning. Toasts are delivered by Tamada which can last upwards of thirty minutes. During the interim while Tamada is speaking, drinking is prohibited. Once Tamada sits, the remaining guests at the table are required to offer additional toasts pertaining to the same topic. Topics include nationalism, the dead, the living, parents, children, friends, nature and, most popular, god.

Once everyone has contributed to the toast, Tamada raises his glass to the others. A scuffle to make sure everyone’s glasses touch before drinking is common. It is impolite to touch glasses at the top and guests often compete to touch each other’s glass lower, sometimes resulting in an extended “touch off” wherein several minutes of glass touching occurs until Tamada is satisfied that all guests at the table have touched glasses at least once in the appropriate manner. It is frowned upon to leave the table for any reason without implicit permission from Tamada.

Tamada then proclaims “Bolo mde!” to which the guests retort “Bolo mde!” which translates to “until the end” – meaning drink the entire glass until it’s gone.

Appropriate activities occurring between toasts are light conversation, political brawls, repeated hugging and kissing, and most importantly, polyphonic singing and/or European style guitar songs usually sung by everyone at the table, if not the room.

The primary function of these dinner gatherings is to celebrate birthdays, death days, religious holidays, funeral wakes and other social occasions. However, none of the aforementioned are required in order to warrant Supra. The only requirement is a gathering of two or more, as much wine as is on hand and the willingness to drink until it’s gone.