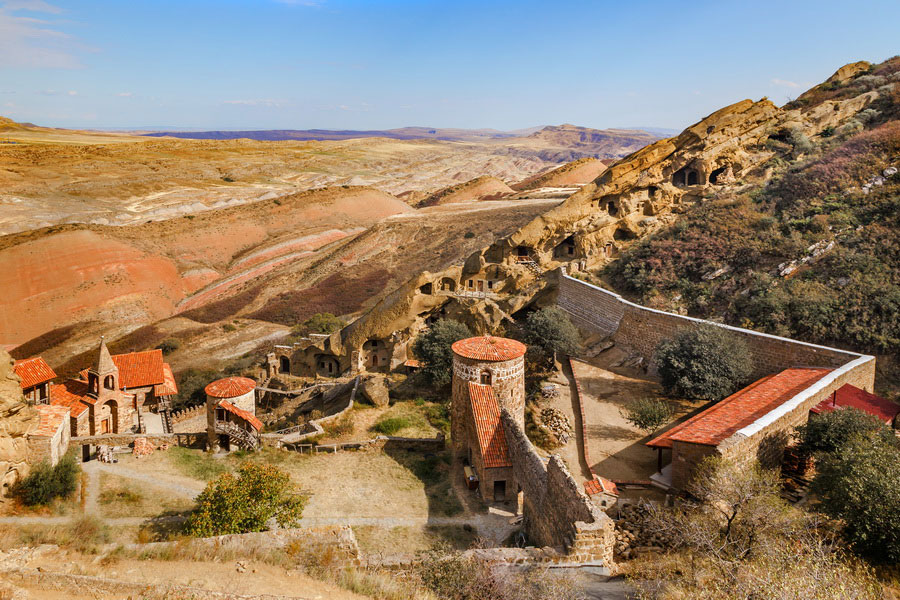 Heading out of Rustavi, just 25 km (15 miles) from Gardabani, is David Gareja, a monastery that is one of the most unique and interesting attractions of Georgia, on par with the cave cities of Vardzia and Uplistsikhe and the ancient city of Ushguli. The cave complexes that make up David Gareja are famous around the world for their originality and rarity.

There are hundreds of caves that are part of the David Gareja Monastery, all built into the cliffs found here. There are churches, monastic cells, storage areas, rooms and more in the 14 total monastic ensembles, each of which was built at a different time. David’s Monastery, Mokhatuli, Tsamebuli, Natlismtsemeli, and Dodos Rka are just some of the complexes built into the cliffs, 25 km (15 miles) along the picturesque Gareja Ridge. The history of the complex dates back to the first half of the 6th century, when the 13 Assyrian Fathers arrived in Georgia. These monks came to Georgia to strengthen Christianity in the region, and are credited with founding many monasteries. One of the fathers was David, who founded the first monastery of the ensemble, David’s Monastery, in a natural cave. His students Dodo and Lukian founded an additional two monasteries, Dodos Rka and Natlismtsemeli. 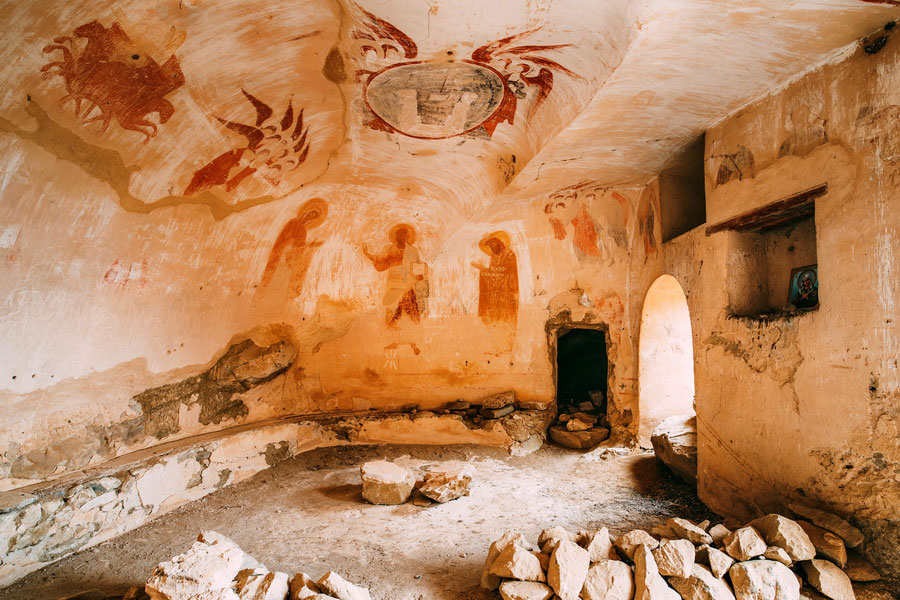 In the 11th century, a terraced courtyard was added to David’s Monastery, plus new cells, a refectory and a church were also added. Soon after followed canals and water reservoirs. The height of David Gareja Monastery was in the 11th-13th centuries, when most of the new monasteries were built - Udabno, Betrubani, and Chichkhituri. This period corresponds to the height of unified Georgia, when churches were decorated with intricate frescoes. The frescoes in the caves of David Gareja show religious subjects, painted with unique techniques and colors. Some of the frescoes show historical figures, like David the Builder (in Natlismtsemeli), Queen Tamar (in Bertubani), and Demetrius the Self-Sacrifice (in Udabno). In the 12th century, David Gareja turned into the cultural and educational center of eastern Georgia. But in the 13th century, during the Mongol invasions, the monastery was robbed and ruined.

Throughout its centuries of history, the monasteries at David Gareja have lived through plenty of destruction, but survived to play an important role in the spiritual development of the country. The last reconstruction at David Gareja dates to the end of the 17th century, when the churches, courtyard, and refectory were all rebuilt. Starting with the appearance of religious schools in cities, in the 19th century David Gareja was abandoned, to later be used with military purposes by the soviets and Russians. 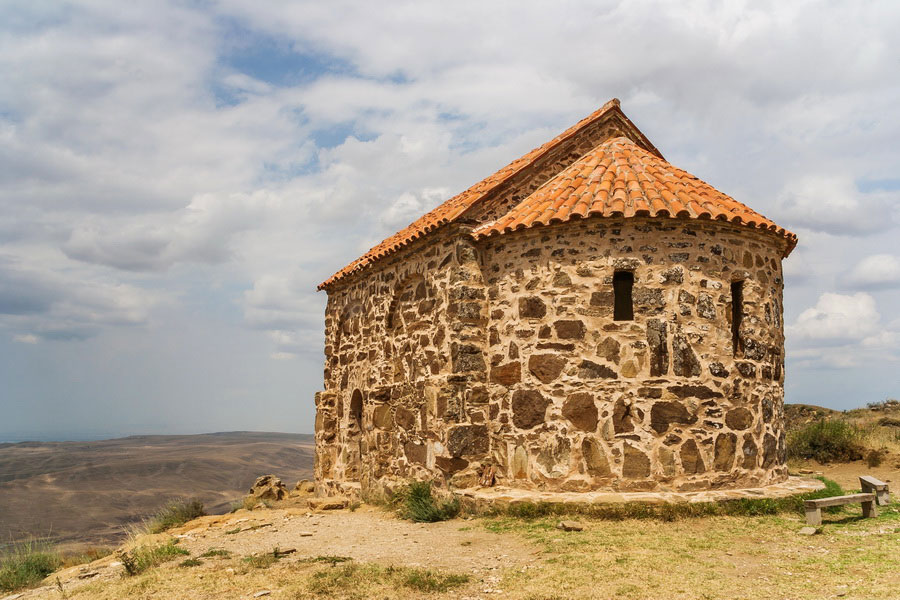 The functioning monastery at David Gareja today is an architectural masterpiece, both because of its grand scale and because its historical and artistic merit occupies a special place among the cultural monuments of feudal Georgia. Some of the frescoes have been damaged because of Soviet and Russian military trainings held at the complex, but as a whole, David Gareja is well-preserved and an excellent reminder of the deep history of the region.

At the David Gareja complex there is a special item - a stone brought by David himself from a pilgrimage to Jerusalem. As he was arriving in Jerusalem, David was overcome with such severe trembling that he decided not to enter the city itself, and to only take three stones and return back. That night, the king had a dream that someone had taken all of the spiritual power of Jerusalem. Soldiers caught David and took two of the rocks, but he was able to bring the third to Georgia. This stone, one-third of Jerusalem’s spiritual power, is held in the Sioni Cathedral in Tbilisi, and is brought to David Gareja only for special ceremonies. 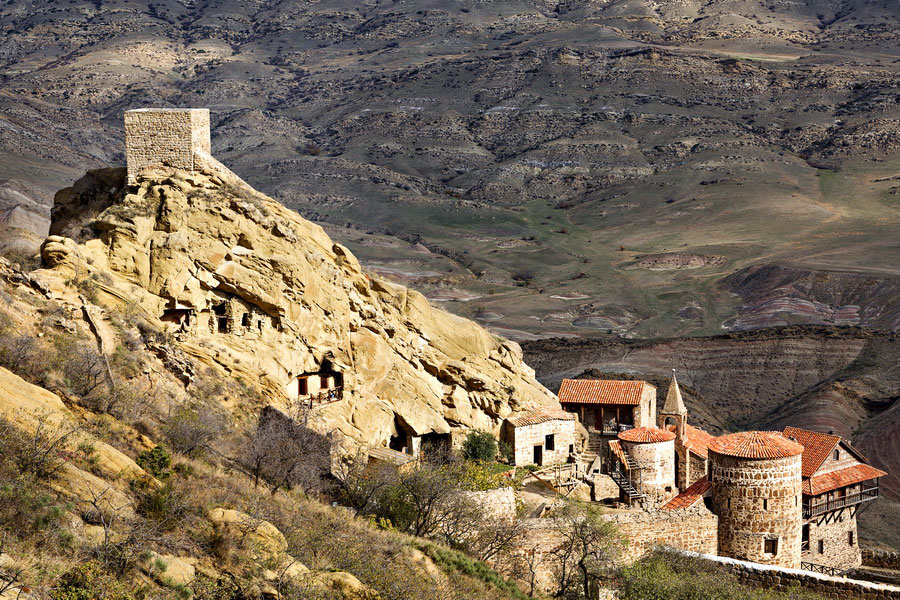 The Georgia-Azerbaijan border runs right through David Gareja complex, leading to international disputes as to the heritage of the ensemble. As both countries try to assume full control, each side insists that it is the one true owner and that their history ties them directly to this site. Negotiations are still ongoing, and so David Gareja still remains a place of international interests.