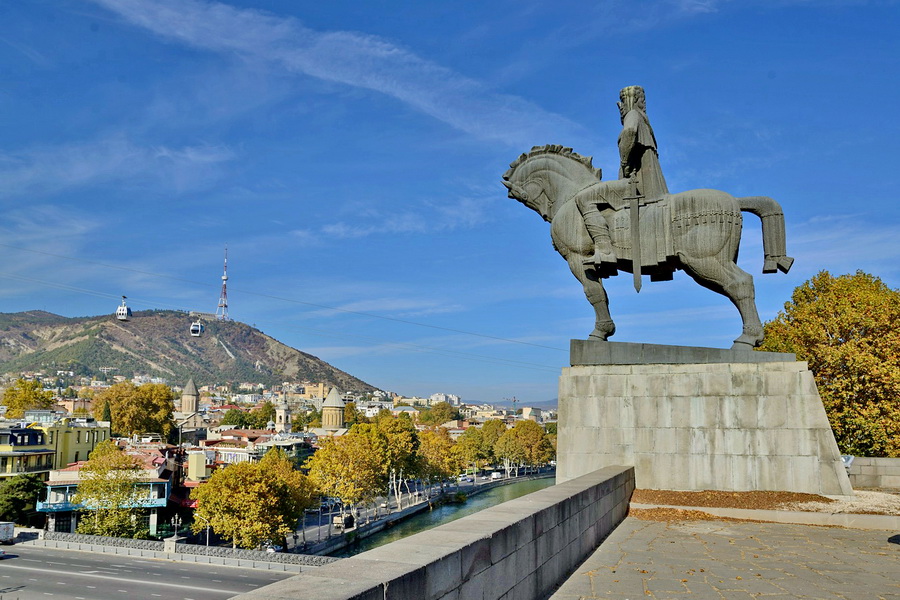 On the southern slopes of the Caucasus Mountains, between the Black and Caspian Seas, live the freedom-loving Georgian people who lay claim to a long and exciting history. Forged amidst continual clashes with powerful empires, this small nation miraculously managed not only to band together and survive but to maintain a unique culture, distinct language and, most importantly, national sovereignty.

Theories abound regarding the early chapters of history of Georgia and the ethnogenesis of the Georgian people. Archaeological excavations and ancient records have confirmed the presence of numerous tribes inhabiting and migrating through the South Caucasus since prehistoric times, and thus pinpointing precisely when and from where the ancestors of modern Georgians arrived is quite complicated.

Nevertheless, many historians agree with the idea that Georgians are descendants of the ancient Colchis, Diauehi and Caucasus Iberian tribes. Some of the earliest references to these people and their kingdoms can be found in the chronicles of Herodotus and Strabo. The most famous Georgian kingdom of antiquity was Colchis (Egrisi) which, according to Greek mythology, was the mysterious homeland of Princess Medea, the setting for the Legend of the Golden Fleece and the ultimate destination of Argonauts. Indeed, both in mythology and on the world map, Georgia has long played a central role.

The nation’s fascinating language is further proof of the antiquity and unusual origins of the people of Georgia. Europe and Asia, on which Georgia is straddled, do not contain a single language that bears resemblance to Georgian, and linguistic analysis of the Georgian language has confirmed that it does not belong to any other language family in the world. Instead, it is a representative of the unique Kartvelian language family. The family consists of 4 languages, which are spoken by Georgians and three small Georgian sub-ethnic groups: the Megrelians, Svans and Laz, all of whom are native to Georgia or the Black Sea coast. According to some linguists, the first split between proto-Kartvelian languages happened in the 19th century BC. If this theory is true, Georgian is one of the oldest languages still spoken in the world today.

The Georgian language has three authentic scripts. The newest and most widely used one is Mkhedruli, which first appeared in the 11th century. The modern Georgian alphabet consists of 33 characters with beautiful, rounded forms.

Geographically, Georgia is located in a strategically important region. The main corridor for nomadic peoples migrating south used to pass through the Dariali Gorge, which currently lies along the Georgia-Russia border. Furthermore, one of the main economical and trading centers of Western Asia and Transcaucasia was once centered in Georgia. Tbilisi, the country’s capital, has thus always been an international city, and even remote areas of the country have long boasted of multiethnic populations.

People of various ethnicities have contributed to the many exonyms of the country and its language. As a result, Georgia is known today under different names. In the western world, the country is known as Georgia. According to some theories, this word is derived from the Greek word geo, meaning “land”, and emphasizes the fact that agriculture has been developed here from ancient times. Old Persians called the country Varkan, meaning “Country of Wolves”. The Russian designation for Georgia is Gruziya. For Armenians, Georgia is Vrastan, and for the Turkish, Gurcistan. Georgians themselves usually refer to their land as Sakartvelo, meaning “Land of the Kartvelian People”, i.e. Georgians. Although this term was first used in medieval times, it actually has biblical origins, bearing resemblance to the name of Noah’s grandson Kartlos. According to medieval Georgian belief, Kartlos himself was the founder of Georgian civilization.

The Bible and Christianity have influenced more than just the Georgian language. The country was Christianized in the 4th century, and Georgia’s religion became one of the nation’s main unifying factors and an integral part of local culture. Georgia is now considered one of the key strongholds of the Christian world.

Apart from its strategically important location, Georgia has always distinguished itself with its pleasant climate and fruitful soils. As a result, many powerful empires sought to conquer and control the country over the centuries, and history of Georgia is essentially one long tale of a fight for freedom. Throughout the ages, the Georgians have been attached by the Achaemenid Empire and Roman legions, Sasanian Iran and Arab conquerors, Seljuk Turks and Khwarazmian shahs, Mongol khans and emirs of the Timurid Empire, Ottoman Turks and Safavid Qizilbash, Lezgin marauders and Russian Bolsheviks. Enemy armies nearly always outnumbered the Georgians, and many battles were lost. Cities were defeated, captured or razed and subsequently built up again. The bloodshed was immense, but collective wounds always managed to heal in time for new fights in the name of God and of freedom.