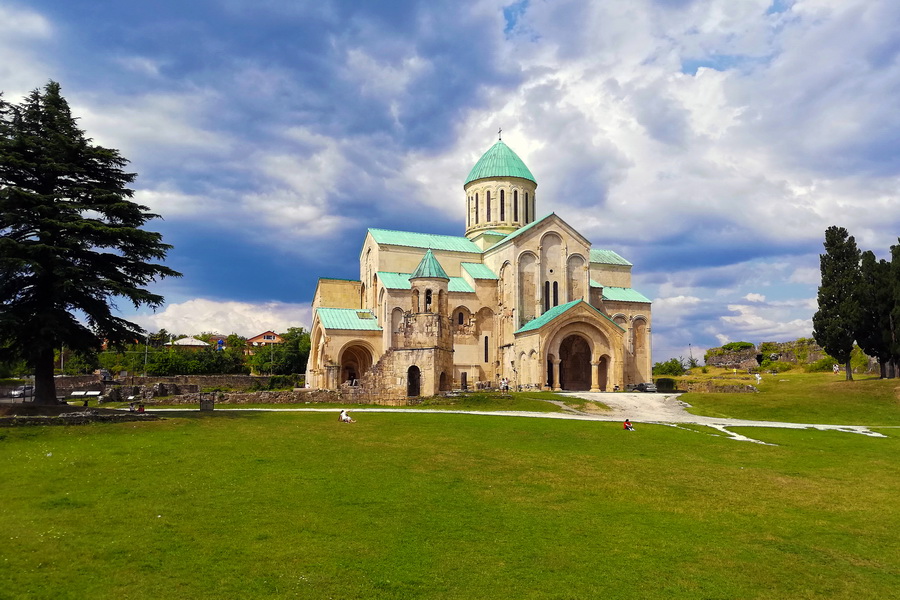 The Cathedral of Bagrati (or Bagrati Cathedral) was built in 1003. It is one of the main hallmarks of Kutaisi, the ancient city of Georgia. The cathedral amazes each visitor with its scale and unique architecture. It started a new era in the early medieval history of Georgian temple architecture.

The cathedral of Bagrati was built to commemorate the unification of Georgia by King Bagrat III. One of the most beloved Georgian kings, David IV the Builder, was crowned here in the 12th century.

If you plan to travel to Georgia and are going to Kutaisi, you should not miss visiting this unique place, which has hundreds of years of history.

The scale of the cathedral will impress from the first glimpse. It is located on a hill, opening the beautiful views of Kutaisi, the Racha mountain range, and the Rioni River. The temple was partially ruined for centuries. It was restored in 2012, mainly preserving the original image and style of the building.

The building process of Bagrati Cathedral started in the 9th century. The church of St. John the Baptist, located in the village of Oshki, was chosen as a prototype for the design.

Huge blocks, hewn from stone, are connected, forming a multi-level ensemble of aisles. The temple is crowned with a huge dome with a cross on top. The walls are partially decorated with stone carvings from the outside. The floor inside the temple is covered with mosaic tiles. 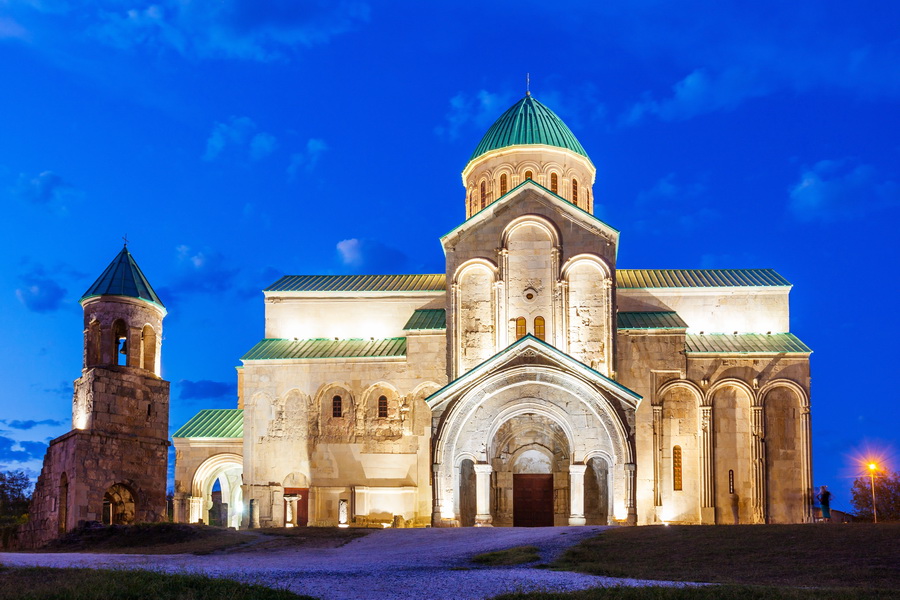 Bagrati Cathedral is one of the oldest temples in Georgia, witnessing many important historical events for the country. Its age has exceeded a millennium.

The construction of the cathedral started before the Golden Age Period of Georgia. At the same time began the global unification of the scattered Georgian principalities and the formation of a united statehood. The main character in this historical period is King Bagrat III, who ascended the throne as the king of the Abkhazians in 978, taking over this title from his father. It was Bagrat III who united the separate Georgian lands into a single kingdom. The cathedral of Bagrati was built to commemorate the unification process. The construction was completed by 1003.

In 1089 one of the greatest Georgian rulers, king David IV the Builder was crowned here. His name is associated with the very concept of the “Golden Age of Georgia”. David became the king when he was 16 years old. Notwithstanding his young age, he initiated several major reforms, altering the history of the country. The economy and culture started to flourish in Georgia.

For many centuries, the Cathedral of Bagrati was a major center not only of the religious but also of the social life of the country. Important ceremonies and meetings were frequently held here.

In the 17th century, one of the main fortresses of Kutaisi was handed over to the Turks. For years, the rulers of Imereti tried to take over the ownership of the fortress.

During one of the battles, the Turks secretly put gunpowder under the foundation of the temple. The explosion did not damage the walls, though the dome collapsed. The cathedral stood abandoned, in a half-ruined state for more than 3 centuries.

In 1994, the cathedral was included in the UNESCO World Heritage List (however, in 2017, after the restoration, it was excluded from there). starting from 2001, religious services were periodically conducted in it, even though it was almost ruined.

The decision to restore the cathedral was made by Georgian President Mikheil Saakashvili, who was determined to present to the country and the whole world this miracle of Georgian architecture in its original, majestic, and monumental form. Saakashvili was criticized at the time for this intention. And even the patriarch of the Georgian Orthodox Church, Ilia II, expressed his dissatisfaction with this idea, but the decision was carried out.

Even though the architecture and style were preserved, some modern elements were added to the cathedral as well and that was the reason why it was removed from the UNESCO World Heritage List.

The temple can be seen almost from every part of the city. To get there, you will climb the high hill on which it was built. The magnificent views and peaceful atmosphere of this unique place will compensate for your efforts if you climb on foot. It's nice to just sit here, enjoying the panorama of Kutaisi, especially in the evening, when the city lights up with hundreds of lights. It will be quite interesting to visit the temple during the church service. The singing of the Georgian church choir in this amazing atmosphere will undoubtedly evoke the most vivid emotions in you.