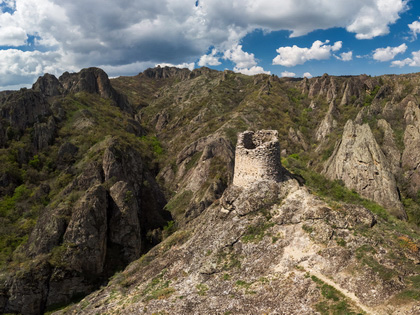 Day Hike to Birtvisi Canyon combines stunning scenery, remote historical castles and rigorous hiking to create an unforgettable trip to one of Georgia’s most diverse canyons. Hiking in Birtvisi Canyon will revitalize your spirit while bringing history to life among the ruins of medieval fortresses and castles. 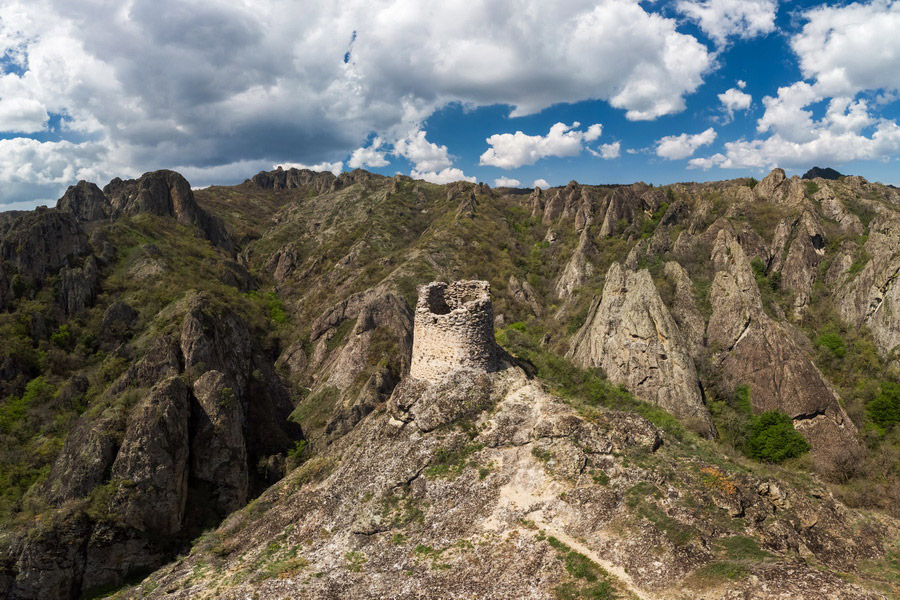 Birtvisi Fortress is one of the oldest citadels in Georgia. It is located in the most inaccessible place, high in the mountains, among the impassable Birtvisi canyons. Currently, only parts of the walls and gates of the fortress remain, as well as the Sheupovari tower and the ruins of internal buildings. However, it is definitely worth seeing this miracle. First, to touch the living history, which dates back more than a millennium. Secondly, to see the fascinating beauty of the Birtvisi canyons. In summer, the views from the walls of the fortress are especially good.

History of the Fortress

When exactly the citadel was built, no one knows. In the sources that have come down to us, it has been mentioned since the beginning of the XI century. The fortress was part of the fortifications along with other fortresses: Partskhisi and Orbeti. At that time, most of modern Georgia was dominated by a state entity called the Tbilisi Emirate.

In 1030, one of the Liparitid princes, Liparit IV, opposes the emir of the Shedaddid dynasty and captures the fortress of Birtvisi. At that time, the Lipartids were at the peak of their strength and power and could easily overthrow the power of the Arab emir and even capture Tbilisi. However, the Iberian kings of the Bagratid family, who ruled then under the leadership of the caliphate, were afraid of such a rapid development of events and made a deal with the Muslims. After that, the Tbilisi emirate existed for more than a hundred years. In 1060, King Bagrat converted Birtvisi into his domain.

In the following centuries of feudal wars, the citadel changed hands more than once. However, almost every time its capture could be considered a miracle, since the fortress is located in such a closed, inaccessible and isolated place that the soldiers who stormed it must have been professional climbers. The citadel functioned until the XVII-XVIII centuries. However, after it was almost completely destroyed. When exactly and by whom is unknown.

The Current State of the Fortress

The fortress is almost completely wiped off the face of the earth. However, there are characteristic parts of the fortifications that have survived through centuries of wars and civil strife.

The fortress was built on one of the prominent peaks of the Birtvis canyon. Separate peak formations merged with each other, forming a semicircle. This location with such a practical geological relief has become part of the citadel. With such a construction, it was possible to get inside Birtvisi only through a narrow, hard-to-pass gap between two rocks. This place was fenced with a fortress wall and gates for additional protection. It is through them that you can now get to the walls of the citadel.

Individual elements of the former defensive point were completely destroyed down to the foundation. All the more valuable is what remains of the fortress now. Perhaps the best-preserved part of the citadel is the Sheupovari Tower, which means "impregnable" in Georgian.

Climbing up to the walls of Birtvisi, you can admire the fascinating views of the surrounding green-blue canyons and rocks of unusual shape.

How to Get to Birtvisi

The fortress is located in the Kvemo-Kartli region, in the gorge of the Algeti River. It is most convenient to get to the Birtwisky canyons by car. The path to the fortress and the Sheupovari Tower starts from the village of Tlisi, which is located on the left side of the Partskhisi-Manglisi highway. The trail can be found opposite the village, to the right of the road.