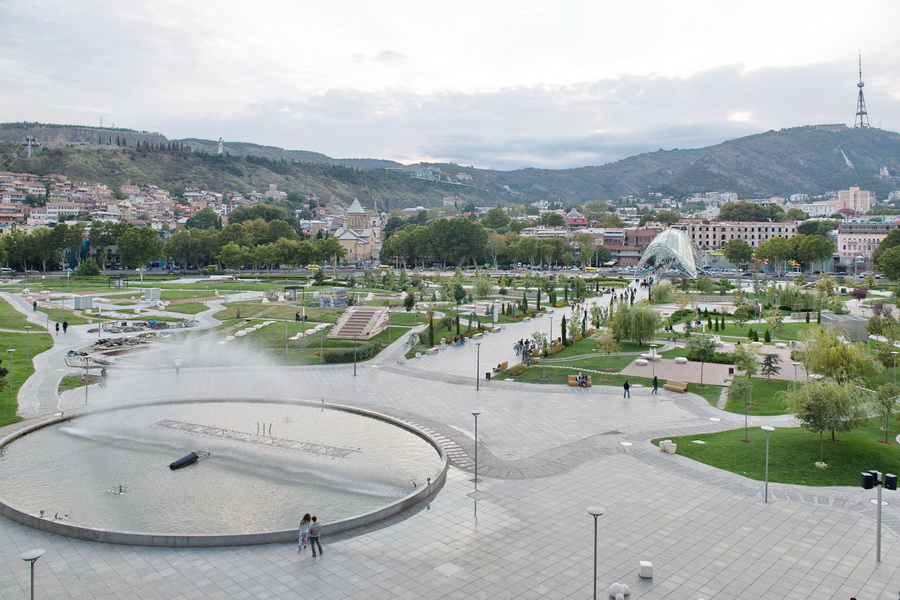 Rike Park is one of Tbilisi’s most famous public spaces and is popular among both tourists and locals. Located in the very centre of the city, on the left bank of the Kura River, the park is an ideal place to relax among nature, as well as enjoy various attractions. It is also the starting point of the cable car which, in just a few minutes, transports visitors to the Narikala fortress on the Sololaki Ridge.

With playgrounds for children of all ages, Rike Park is a great place for families. You can also find many original sculptures and objects of modern art, including a giant piano and a giant chessboard. There is an amphitheatre and a stage that often host concerts and other events.

The park’s major architectural sights are the Bridge of Peace and the Rike Concert Hall (which, unfortunately, is currently empty). These eye-catching modern structures stand out prominently in contrast to the old city’s narrow streets and rows of carved balconies, but also somehow fit organically into the central part of the city. You’ll see images of these two sights on most postcards and in most tourist brochures.

The Bridge of Peace is covered in several thousand LED lights that illuminate it in the evenings – as well as broadcast the names of all the elements in the periodic table using Morse Code! The bridge is a convenient place to cross the river in the centre of Tbilisi, connecting Rike Park and the old streets of the Sharden area.

In the warmer seasons, evening light shows take place at the park’s large musical fountain – a truly bewitching sight! Also interesting is the copper tree, a sculpture symbolising the central part of the old city. The tree’s twisting branches reach outwards and upwards from the trunk, just as the streets of old Tiflis wind their way from the main square to the top of the hill.

In summer, Rike Park is overgrown with greenery, manicured lawns, flower beds, and flowering bushes. But it is nice to spend time here in any season. The relative distance from the roads and the scale of the park make it possible to enjoy some peace and quiet while breathing the fresh air and basking in the warm Tbilisi sun.

In October, the park hosts celebrations for Tbilisi’s City Day, the large-scale Tbilisoba festival at which visitors can taste traditional wine, cheeses, honey, churchkhela, and other locally-made products.

Before Rike Park was developed, the area on which it stands was a huge asphalt field that people used for learning to drive. However, the new park completely transformed the area. In the evenings, from the Bridge of Peace, you can gaze at the twinkling evening lights and the peaceful Kura River, and if you wish, ride the cable car to the top of the hill to view the whole panorama of Tbilisi illuminated in the cozy lighting from lanterns and the windows of houses.

Rike Park is undoubtedly worth a visit, as it offers the chance to relax in beautiful, peaceful surroundings while at the same time being in the very centre of the city and close to other attractions.