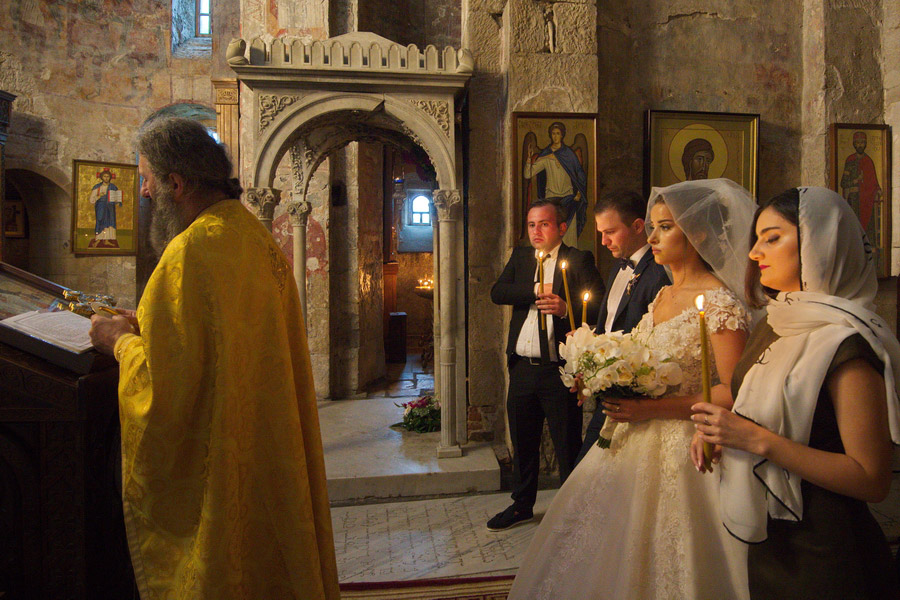 Georgian wedding tradition begins with machankloba. This is the tradition of matchmaking. It involves family members and friends who assist in arranged meetings to match prospective couples. The next step is nishnoba which represents engagement and culminates in the wedding ceremony of kortsili.

Georgian weddings are known for an immense number of invited guests which can exceed two hundred per family. All invited guests are expected to attend and to decline is considered extremely offensive, sometimes warranting the end of a friendship and possibly instigating an ongoing family feud. Bridesmaids and groomsmen are expected to refrain from romantic association with each other. This too can result in enmity among everyone involved.

A marriage should be approved by families of both bride and groom. Historically, bride abduction was common place and condoned when done with the bride’s consent. This tradition has waned in the twenty-first century but is still sometimes practiced in more rural areas.

According to one custom, the groom should climb on the roof and free a white bird as the bride enters their new home. The newlyweds are offered a glass of wine. The groom drinks first then drops the wedding ring into the glass and passes it to the bride who drinks as well. Afterwards, the groom removes the ring from the glass and presents it to the bride while vowing devotion. Most often, the bride and groom will move into the house of the groom’s family. The bride first inspects the house after stepping on a decorative plate while entering. They are then given wooden torches called chiragdani. During her walk through the house, the bride should touch a cauldron which is a symbol of household and go round a pot with oil or wheat three times.

Georgians have a tradition of wedding processions through the streets. The bride and groom are often seen flailing their arms from the roof of a packed limousine. Guests and family members follow in a stream of endless cars. Horns and screams of revelry are heard for kilometers in advance.

Georgian wedding supras are among the most entailed. Toasts to the newlyweds are initially proposed by the lead Tamada who assigns vice Tamadas to each table. Toasts should be directed toward the bride and groom, success in raising children, long life together, and their respective families.

Wedding supras have been known to continue well into the morning if not into the next afternoon. Georgians sometimes joke about a tradition of brawls among rival families. Eating and drinking are encouraged until all guests have exited the reception.