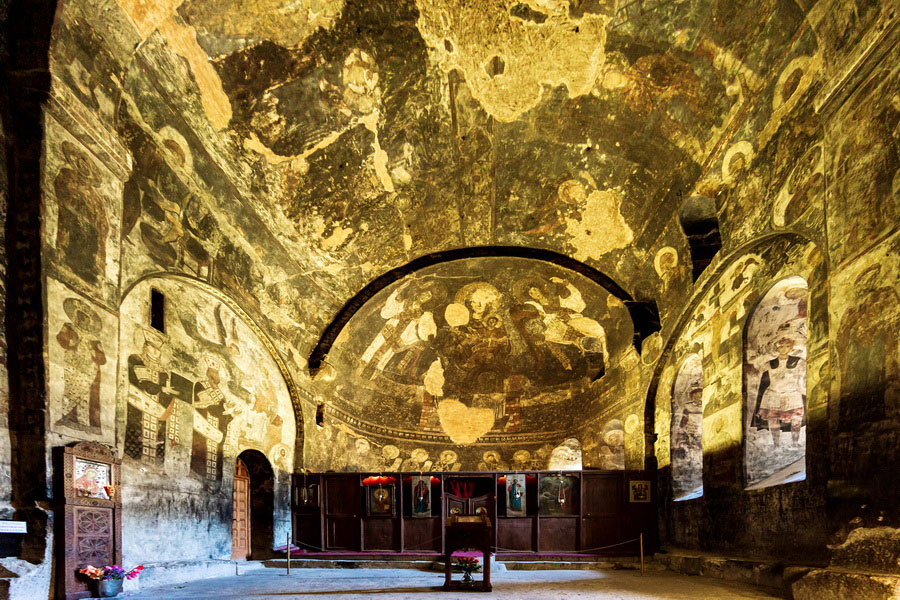 Tsunda Church in Vardzia is an orthodox cathedral located 7 kilometers from Vardzia, Georgia in the country’s Samtkhe-Javakheti Region. The church is perched on a rocky massif near natural hot water springs and beautiful terraced gardens which offer visitors the opportunity to hike and explore the surrounding area.

Tsunda Church of St. John the Baptist likely served as the political and ecclesiastical center of Javakheti during the Georgian Golden Age, which lasted from the 11th-13th centuries. Paleographical evidence places its construction in the 12th-13th centuries, a supposition supported by the chapel’s architecture, ornamentation and masterful stone carvings.

Numerous scholars have taken special note of the well-preserved inscription on the arch above the chapel’s western door. It is written in the Asomtavruli text, the oldest form of the Georgian alphabet which is no longer in use, and reads: “In the name of God, I, Ichkitman the son of Gurgen, have built a church in this land of ours, in the name of St John the Baptist, to offer prayers for my parents and me”.

Researchers believe that Ichkit the son of Gurgen was a powerful feudal lord during the 12th-13th century reign of Queen Tamar, an important figure in Vardzia’s history. His name appears in several other historical sources, most notably two inscriptions carved into a domed church in Vanis Kvabebi Cave Monastery, located near Vardzia caves.

Although it now sits in ruins, Tsunda Church is an asset to Vardzia tourism, for it has managed to retain its graceful veneer and is further enhanced by pleasant orchards and ancient city remains found nearby.

Tsunda Church sits atop an elevated stone terrace, of which the northern half is occupied by the church and the southern section is a fenced vacant lot. In later years, a gate was erected to the south of the church and small storehouses added on the east and west. The church, gate and storerooms were not built simultaneously, yet were all constructed between the 12th -14th centuries.

The chapel extends from north to south, with the length of the southern façade two meters longer than the northern face. The entrance is on the south side, and although two doors of nearly equal size were originally formed, along with an entrance on the western side, one of the southern entrances and the western door were demolished after the fence was built. From the south, an open arched gate erected on four pillars is adjoined to the church. The eastern and western fence runs parallel to the church walls, which themselves exceed one meter in thickness.

The sanctuary is comprised of large, finely chiseled stones. Its interior walls are made of rough natural rock, while smooth stones were used for the columns, arches and other intricacies. Although large fragments of blackened debris remain, no traces of murals or colored objects have survived to our day.

Restoration of Tsunda Church was carried out in 1938 by the Committee of the Protection of Antiquities, at which time the church was cleaned and partially reinforced. It was completely restored in 1982.

When visiting Georgia, consider traveling to Samthkhe-Javakheti Region, whose landscape resembles a Mediterranean paradise. A trip from capital city Tbilisi to Vardzia itself takes about 4 hours by car and is particularly pleasant in summer and autumn, when the weather is warm and rainfall limited. The region’s vast terrain, castles and medieval churches, including Tsunda Church in Vardzia, make it a prize discovery for curious explorers.