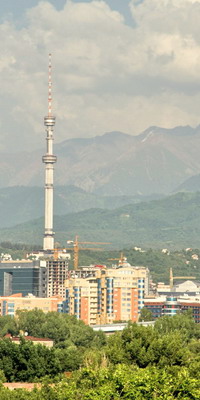 Almost 150 years have passed since the first settlements were established in Almaty. Over these decades, many joyful and sad pages have been turned over in the Book of the city's Fate and in the lives of its inhabitants. Many political, social, and economic changes took place. It is the civic duty of each citizen of Kazakhstan to respect the heritage of ancestors, to reconstruct the portrait of the city on the historical background, and to pass down the monuments of the epoch in events, faces, and buildings to new generations.

The city is situated in the centre of the Eurasian continent, in the south-east of the Republic of Kazakhstan, at 77 degree of east longitude and 43 degree of north latitude, at the foothills of the Trans-Ili Alatau Mountains, the northernmost ridge of the Tien Shan. Almaty can vie with the mountain cities of Dushanbe, Karakol, or Erevan. It is on the same parallel with the well-known cities of Gagry and Vladivostok.

The city occupies an area of over 170 square kilometers. It stands in the valleys of the Bolshaya and Malaya Almatinka rivers and their feeders running down from the Trans-Ili Alatau glaciers and ravines to the Ili Valley (Balkhash Lake Basin). Mountain rivers and lakes are the main source of the city’s water supply. In the mountain gorges, there are a lot of waterfalls, and thermal radon and sulphuric sources used as the basis for balneological spas.

On the outskirts of the city there were constructed mountain scientific stations to study the Sun and cosmic rays at Big Almaty Lake and the Zhusaly-Kezen Pass, astrophysical observatories at the Kamenski Plateau and the Assy Pass, sports complexes at the Medeu skating stadium and Shymbulak ski center, alpinist and tourist camps, health resorts, resort hotels, and campings.

Talgar (5017 m), Komsomol (today's Nursultan. 4376 m). and Bolshoi Almatinski (3684 m) peaks prevail over the range of picturesque summits surrounding the city from the south. Some summits rising beyond the clouds are as high as European Mont Blanc, Caucasian Kazbek, and American Tajumulco.

The climate in the city is sharply continental, with considerable fluctuations in temperature not only in different seasons but also between day and night. From a height of 500 meters the city climate is closer to the steppe and semi-deserts, coming close to the hot Kaskelen Moyunkuins. In the southern areas, at an altitude of 1520-1750 meters above sea level, in the Medeu Tract and the Kamenski Plateau, you can feel the breath of “Arctic mountains”.

The period of sunshine is long, up to 1596 hours a year; there are up to 151 frost-free days. The air temperature fluctuates at different heights: at the ascent of over 1400 meters above sea level, the average annual air temperature drops by 0.66° every 100 meters. These and other favourable natural and climatic factors provide unique opportunities for promotion of sport and tourism.

Rich and diverse is the animal and vegetable kingdom of the Trans-Ili Alatau. The Almaty precincts are part of the Ili-Alatau National Park in the territory of which nature reserves and wildlife are arranged. They are the habitat of many rare birds and animals listed in the Red Book of Kazakhstan. Among them is the snow leopard, now embellishing the emblem of Almaty.

At the foothills of the mountains grain, melon and gourd, and tobacco plantations and vineyards are interchanged by orchards and berry fields. It was here where famous “aport” Almaty apple breed was first cultivated. Once this very apple became not only the city’s symbol but also gave it its name ("alma" is the Kazakh for "apple").

Higher in the foothills grow wild apples, hawthorn and apricots. In the mid-mountains, deciduous trees and shrubs give place to the shapely Tien Shan firs. Still higher, the mountains are covered with sub-alpine and alpine meadows, splendid summer pastures ("jailau") turning into mountain tundra and finally into the kingdom of rocks and eternal ice.

Gardens and parks, public gardens and boulevards occupy over 8 hectares of the city territory. Among the green tracts, you can see exotic plants brought from North America, Crimea, Caucasus, Siberia, and Russian Far East. The environs of Almaty can boast rare representatives of the local endemic flora, such as juno, anemone, hawthorn, and oxitropis. Long forgotten names of our countrymen, men of science, are now eternalized in the names of many Almaty plants: Nedzvetski apple-tree, Fetisov onion, Kushakevich saffron, etc. 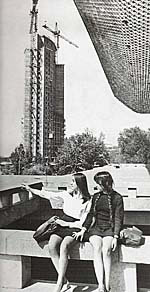 Many names of honorary citizens have been preserved in the names of mountains and valleys of the Trans-Ili Alatau: Palgov, Bryzgalov, Dmitriev, Poyarkov, Shnitnikov and Wojcehowski glaciers; Ryskul, Kolokolnikovs, Zimin Valleys and Kuderin summit. Many old names were changed to new ones.

Early in the 20th century, the writer P.X. Krasnov wrote: "in her witty stories, Teffi noted not without humour that every city is famous for something. Dresden is famous for Madonna, New York - for the Liberty Statue, and Verniy - for its apples and earthquakes". It was also famous for its picturesque hills, one of which was named after the distinguished citizen Verigin.

One of the brilliant projects by the architect A.P. Sokolov-Zeman, left unfulfilled, envisaged the construction of public buildings on the slopes of the famous Verigin Mount (present Koktyube), which top was supposed to be crowned by the monumental House of the Supreme Soviet of the Republic. The project was only implemented in one respect: they built the Palace of the Republic on Abay Boulevard. There is a powerful radio and television transmission station with a 372-metre television tower constructed on the top of the mountain. Together with the mountain, the total height of the structure is 1402 meters above sea level.

The mountain slopes are Almaty dwellers’ favorite leisure area, they are attracted by sledge and ski routes in winter and green flowering lawns in summer. You can easily go up to the top of Koktyube Mount by a ropeway. Walking around this picturesque place which provides a panoramic view of the "southern capital", you can observe the life of the big city. In small cafes, they will offer you to taste aromatic dishes of the Kazakh national cuisine. You can also go on excursions around the neighbouring mountains and vales from the top of Koktyube.

It was here that, charmed by the view of the Trans-Ili Alatau and the steppe mirages of the Apple-tree Valley, the composers B. Yerzakovich and S. Shabelski in association with the poets D. Abilev and A. Lukashenko wrote wonderful songs named "Alma-Ata" and "My City" in 1948. It was here that Aset Beiseuov created his first waltz "Ahnaly Almatym". Poetic feelings would overwhelm the poets Dmitri Snegin in his poems "My city" (1939) and Tair Zharokov in his poem "The flow" (1937).

Almaty's unique natural and climatic conditions influenced courageous scientific ideas, engineering concepts and projects of the century. Here the scientist V.N. Butchman accomplished his idea on solar energy utilization. The solar reflector, which he invented and presented at the exhibition to commemorate the 15th anniversary of the Kazakh Soviet Socialist Republic, boiled water and put into action a small steam machine before the very eyes of audience, sitting in unbreathing astonishment. The positive healing effect of Butchman’s solar reflector was tried in 1959 by patients of the first ever helio clinic in the Republic.

Another scientific sensation that happened in Almaty was the discovery of astrobotany by the academician Tikhov. Astrobotany is a specific scientific branch studying spectrum photometric properties of the surface of Mars and terrestrial vegetation. On this occasion, poets would assert that "there will be apple-trees aporto blooming on Mars".

In 1906, Verniy saw publication of the heritage of the Utopian thinker N.F. Fyodorov under the general title "Philosophy of the Common Cause". The book had been prepared by Fyodorov's student the lawyer N.P. Peterson. This work by the representative of the Russian cosmism Nikolay Fyodorov has been internationally recognised as a monument of philosophic thought. The philosopher foretold that there would come the time of immorality and a utilitarian approach to the memorable places of the human civilization. Something similar has happened unfortunately in Almaty where the past failed to live in harmony with the present and many monuments and historic places have not been preserved.

Frequent earthquakes hyped the detailed study of this natural calamity and the specific features of regional tectonics. This fostered the development of new methods of seismic resistance of Kazakhstan. The history of Kazakhstan knows two geological catastrophes that took place on 28 May 1887 and 22 December 1910 (old style), as well as a destructive mud-and-rock flow which fell upon the city on the night of 8 to 9 July 1921. These events had a considerable effect on development of the city planning and architectural appearance of the "southern capital".

To protect the city against possible mudflows and floods, protective stockades were erected on the  Bolshaya and Malaya Almatinka Rivers and their affluents.