Kok-Tobe Hill (or Kok-Tube) is a popular tourist attraction in Almaty and also a favorite spot amongst locals. The small mountain — standing at 1130 meters above sea level and presiding 200 meters over the relative height of Almaty — is located on the southeast edge of Almaty. With its name translating to “Blue Hill”, a small amusement park, various monuments, a myriad of viewing platforms, and the Almaty TV Tower are just a few of the attractions at Kok-Tobe. There is a cable car to the top as well as a road for cars and foot traffic.

Initially, the area was called Verigina Mountain in honor of a rich merchant who built his house at its foot. In the 1960s, the leaders of Almaty decided to turn the hill into a park and work began on creating all the necessary infrastructure. In 1965, the lower station of the cableway was built and all work was completed in 1967. On 4 November of that year, the grand opening of the Kok-Tobe Park took place. 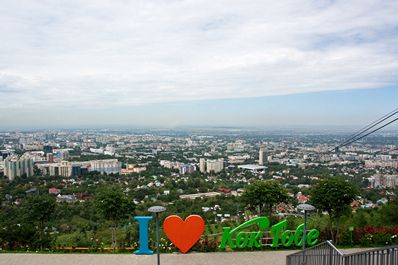 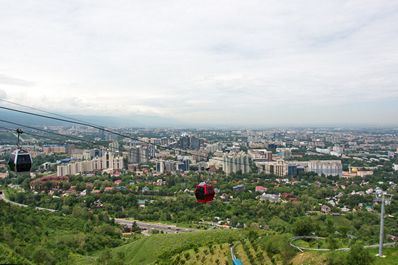 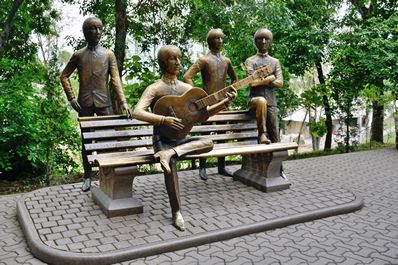 The cable car leading to the top, the first of its kind in Central Asia, was designed and built together with Georgian engineers. A six-minute ride, the cable car on Kok-Tobe is 1620 meters long and gains approximately 250 meters in elevation. The cost of a return ticket is about $4.

Between 1978 and 1983, a 371.5-meter TV tower was built on Kok-Tobe. At the time of its construction, Almaty Tower was the third tallest tower in the world. Although it is the 14th tallest tower today, it still holds the title as the tallest free-standing tubular steel structure in the world. Aside from simply being tall, the tower has another outstanding feature: its seismic resistance; the tower can withstand earthquakes of 8.0 on the Richter scale. Although it is currently closed to tourists, renovations are under way with the hopes of modernizing the tower to give tourists and locals alike a look at Almaty and the surrounding mountains from an even greater height.

In 2007, a monument to British rock group The Beatles was opened at Kok-Tobe. The entire Fab Four are here: John Lennon is sitting on a bench with a guitar and around him are Paul McCartney, George Harrison and Ringo Starr. The monument, made of bronze, is one of the most popular attractions the park. Around the statues there are several speakers which blast English rock hits.

There are also souvenir shops on Kok-Tobe for finding the perfect way to remember Kazakhstan, a Ferris wheel with great views, and several viewing platforms for looking out over Almaty or across the snowy peaks of the Zaili Alatau Mountains. At the end of the walk through Kok-Tobe, you can go to the fountain “Alma” which is in the form of an apple. Apples are a symbol of the city of Almaty and throwing a coin into the fountain is considered good luck.