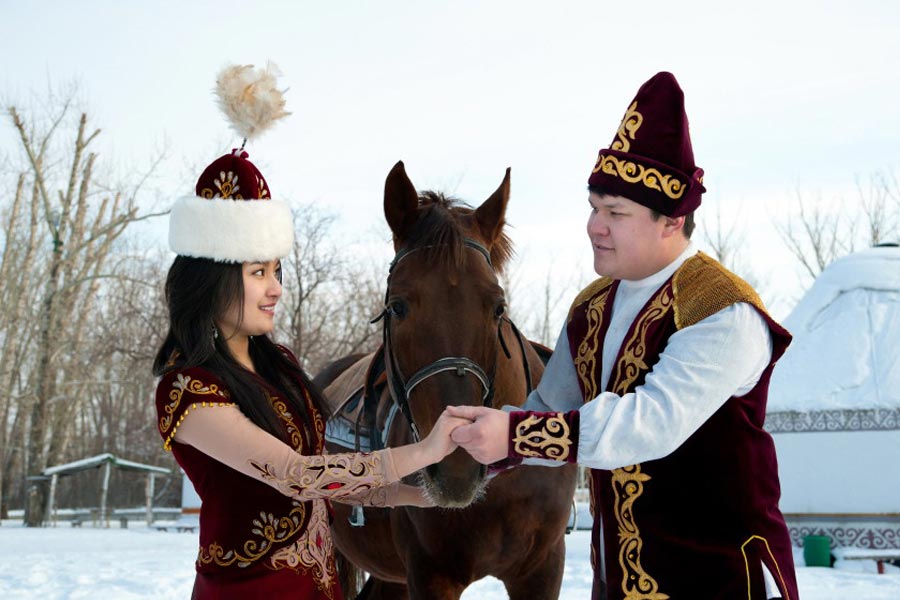 Centuries-old traditions and customs of the Kazakh people

The Kazakhs are originally a nomadic people and, while they now practice a more settled way of life, they have carefully preserved the traditions that have developed over thousands of years. Permanent crossings across the boundless steppes, life in small groups, and religious beliefs have created a unique combination of rites and customs that now comprise Kazakh traditions. Some traditions helped the Kazakh people develop practical survival skills, some had spiritual significance, some helped develop social relationships, and others became the basis of the Kazakh people’s culture and identity.

Today, the traditions of Kazakhstan are part of the national doctrine, which is based on four principles: trust, transparency, tolerance, and tradition. The country’s leadership supports the preservation and revival of national traditions, and various organizations work to disseminate information about the history and traditions of the Kazakh people.

Kazakhs are oriental people, for whom hospitality traditions are very important. Any guest, even an uninvited one, should be welcomed with respect and offered food and the best place in the yurt. Honoured guests are traditionally given shapan (robes).

Weddings are important milestones for people all over the world, but for Kazakhs they are particularly important events that are accompanied by a huge number of wedding customs and rituals. The parents of the future newlyweds start to conspire long before the wedding. Then comes matchmaking and the payment of the kalym (bride-price). The wedding itself is divided into two parts: the wedding in the bride’s house and the wedding in the groom’s house.

For Kazakh people, live revolves around the family. Kazakh people practice special customs and traditions related to family relations and child-rearing. They abide by the principle of “zhety ata”, according to which people should know the seven generations of their ancestors (on the father’s side, as Kazakh society is patrilineal). There are special rules for bringing up children, and significant events in children’s lives are accompanied by specific Kazakh rites.

The daily life of the Kazakhs is filled with many small, but very interesting, traditions, which form a unique ethnic culture. Kazakh people use distinctive customs, household and sports traditions at home, on the street, and at important events. Various games, such as children’s street games and horse games, have also became folk traditions.