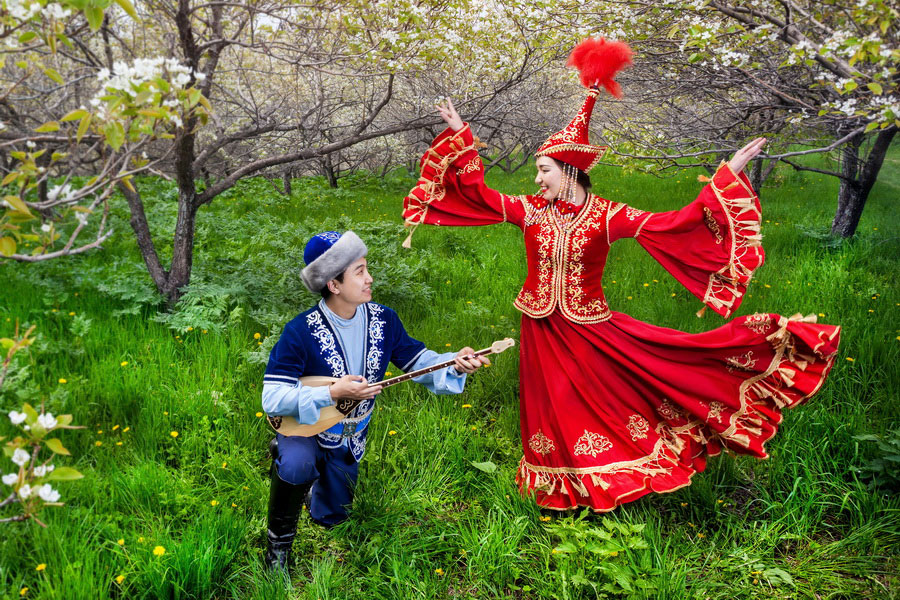 Wedding traditions in Kazakhstan consist of an extensive series of rituals – starting with matchmaking and continuing even past the wedding night – and many customs and unwritten rules. His or wedding is, of course, one of the most important events in the life of any Kazakh person.

In the past, early marriages often took place when the girl was 13 or 14 years old and the boy was 14 or 15. There were also unions concluded between families before the birth of the future spouses. Sometimes, if a girl’s parents were against a marriage, the groom’s family abducted her.

Some wedding traditions have become less important (and less widely practiced) over time due to changes in culture and moral standards, as well as the presence of criminal penalties (such as for abducting a bride). Meanwhile, other customs have been revived. The Kazakh customary law (Adat) prohibits marriage between members of the same clan, up to the seventh generation. This tradition has always been observed in Kazakhstan and, as a result, many Kazakhs know their ancestry to the seventh generation. Adat also prohibits marriages when the bride is more than 8 years older than the groom or the groom is more than 25 years older than the bride.

In old times (and even today in some communities), parents started looking for a bride for their son long before he reached marriageable age. They travelled through the villages, met respected families, and learned about potential brides’ ancestry and background. If they found a suitable girl, they expressed to her parents the desire to match-make. Sometimes, between good friends, there was an agreement to marry each other’s future children (bel kuda). There were also other types of collusion about the future wedding. An alternative, called “kyz koru”, which allowed the young man to choose his future wife, was only permitted for heroes or the sons of very noble families.

The matchmaking process was complicated and involved several stages. The first matchmaker, called “zhaushy”, approached the girl’s father and offered to facilitate a union. If the father gave his consent, the matchmaker gave him a horse. In return, the girl’s father gave a special robe (shapan) to the matchmaker. Then, the main matchmaking took place (kuda tusu). This involved the two fathers and families coming together and getting acquainted with each-other, including eating together from the same dish and exchanging gifts. At the same time, a kind of wedding contract was concluded. If one of the parties later reneged on this contract, he had to pay a fine. Finally, matchmakers visited for a third time (bata ayak) to discuss all the details of the future wedding, such as the date, expenses, and dowry. At the end of the matchmaking process, the groom’s side sent kalyn mal, a gift in the form of cattle or horses. For poor families, the norm was five or six cows, while rich families may have sent a herd of 1,000 horses.

Following the matchmaking process, the future bridegroom could visit the future bride for the first time. He first had to send a gift (oli tiri) to show respect to the bride’s family, after which he could go to the village where the bride lived. According to custom, the groom went in the evening when it was dark, supposedly in secret. The next day there was a general celebration with dances and songs, the young couple got to know each-other, and the girl gave the future bridegroom a handkerchief as a sign of her purity. If, after this meeting, either the boy or girl refused to go ahead with the marriage, the side that refused had to return all the gifts and pay a fine.

On the appointed day, the so-called “bride’s wedding” took place at the bride’s father’s house. Usually 15-20 people from the groom’s side attended, and the groom was dressed in his best clothes so that everyone immediately knew who he was. At this time, the bride held a ceremony called “saukele kigizu”, for which she was wore a bridal headdress (saukele) that could cost a fortune. The ceremony focused on preparing for the bride’s departure to her new family: showing her dowry, dismantling the wedding yurt, and collecting everything needed for the move. There were also many small rites that were accompanied by the exchange of gifts.

On this day, the girl said goodbye to her parents and relatives, and singing and various horse games took place in the village. This was followed by the official “wedding night”, which was accompanied by special rites and aimed to test the bride’s purity. The next day, at sunrise, the girl was sent with a dowry caravan to the groom’s house. She sang the farewell song “Koshtasi Zhari” and the young people of the village sang the song “Zhar-Zhar” in response. The bride was forbidden to look back at her parents’ home as she left.

When the bride’s caravan arrived in the village, she was left at some distance from the groom’s house to walk there accompanied by local girls with everyone able to see her. Along the way, the bride was showered with “shashu” (sweets and coins). She was supposed to cross the threshold of the house with her right foot and with a bow so that her saukele (headdress) would practically touch the ground. Then the betashar rite was held, which involved the bride showing her face to all the guests. The groom’s mother came up to the bride, kissed her, and took off her veil. The veil was cut into many pieces, each of which was tied around a vessel used to hold kumis. These pieces symbolised wishes that the newly-married couple would have many children. Then there was a wedding feast, after which the groom’s mother took off the bride’s saukele and replaced it with a hat (kasaba) that represented her transition to the status of a married woman.

The following day, the marriage ceremony (nike kiyu) was held. The groom, bride, and two witnesses went to the mosque, and sat down in front of the mullah holding a cup of water with coins at the bottom. The mullah recited a prayer, while the bride and groom drank from the cup. They did this three times, before the witnesses drank from the cup and took out the coins. Thus, the bride and groom became husband and wife.

Following the main wedding ceremonies, the new wife went to visit all her husband’s relatives, taking gifts for them. They tested her in every possible way, checking her politeness and upbringing. The new husband went to his father-in-law’s house, also taking various gifts. Various rituals were also held to help the new wife adapt quickly to her new home. She was only allowed to visit her parents’ home 1 year later.

In the past, weddings lasted for 3 days (and sometimes more). Now they generally last only 1 day, with some customs and ceremonies omitted. For example, dismantling the wedding yurt is no longer an important wedding tradition, and the “wedding night” now takes place after the main wedding ceremony, rather than between wedding ceremonies at the bride’s and the groom’s houses. Modern Kazakh weddings are like standard European weddings, although many people try to preserve the traditions of their ancestors. Brides’ wedding dresses are similar to the white wedding dresses used internationally, but the saukele is still the Kazakh bride’s main accessory. Widely-used new traditions such as parades, and photo shoots in front of monuments, have become fashionable in Kazakhstan.