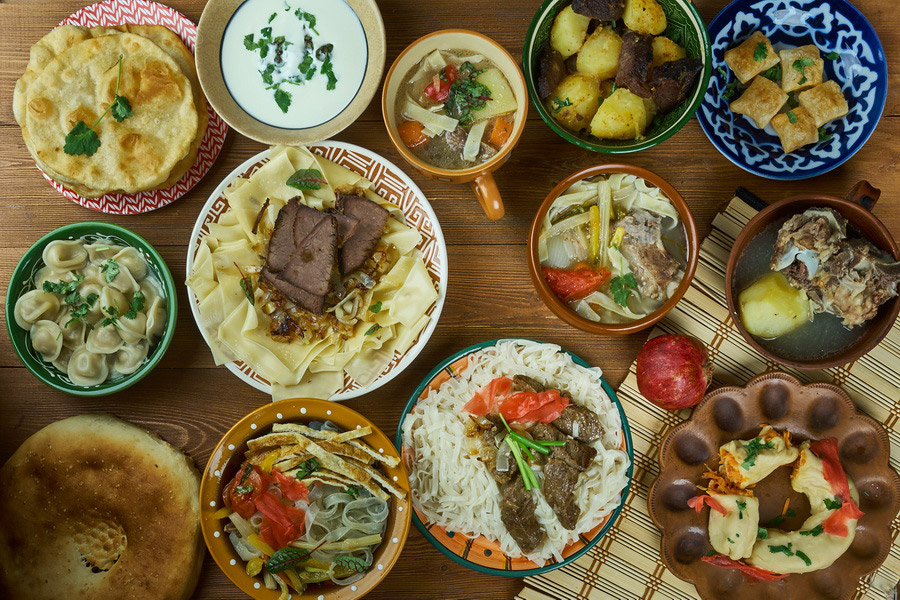 Modern Kyrgyz cuisine has absorbed traditions from ancient nomads yet also evolved to embrace new ingredients as they became available in the land. Today Kyrgyz dishes are still abundant with meat, milk and dough products but also include vegetables, rice and sugary snacks. Rather than offering you a long list of foods, we present to you the 10 Kyrgyz dishes you have to try while in country: 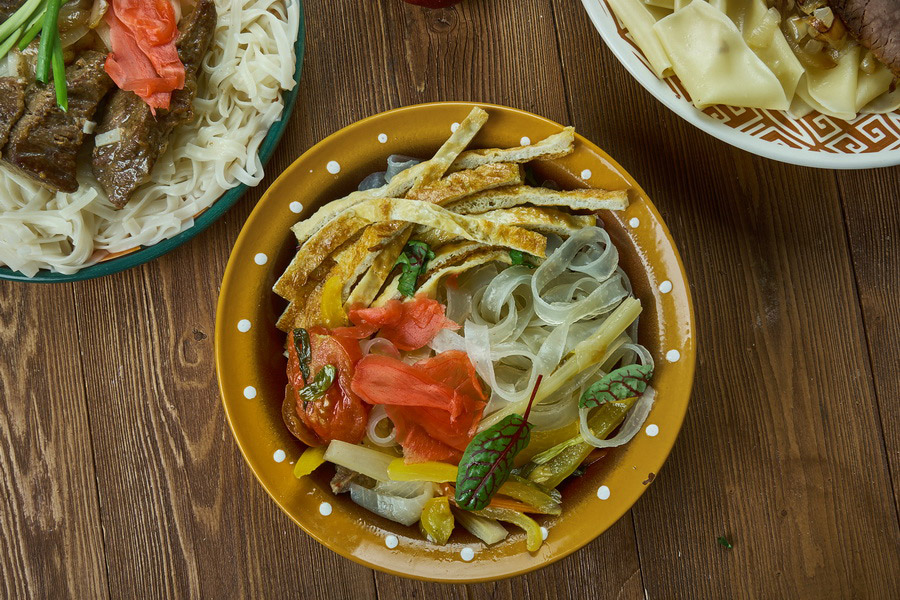 Ashlyam-fu, arguably the most popular dish in Kyrgyzstan, is widely enjoyed by tourists and locals alike. With a taste as delightful as its name is exotic, it is sure to tempt you throughout your travels. Ashlyam-fu (also ashlyanfu and ashlyan-fu) is a cold soup which arrived to Kyrgyzstan from Dungan cuisine in the mid-18th century. Its name is a derivative of "ash" and "liang-fen"; "ash" means “food” in Kyrgyz, and in Chinese, which is widely spoken by Dungans, "lian-fen" is the name of a cold noodle dish. Unlike the Chinese variant, the Kyrgyz soup recipe contains not only starch but meat, noodles, eggs and vegetable broth. If you like spice, be sure to add lazy (lazjan), a spicy seasoning made from red pepper and sunflower oil. The best ashlyam-fu is prepared in the town of Karakol and served with fried potato pie. 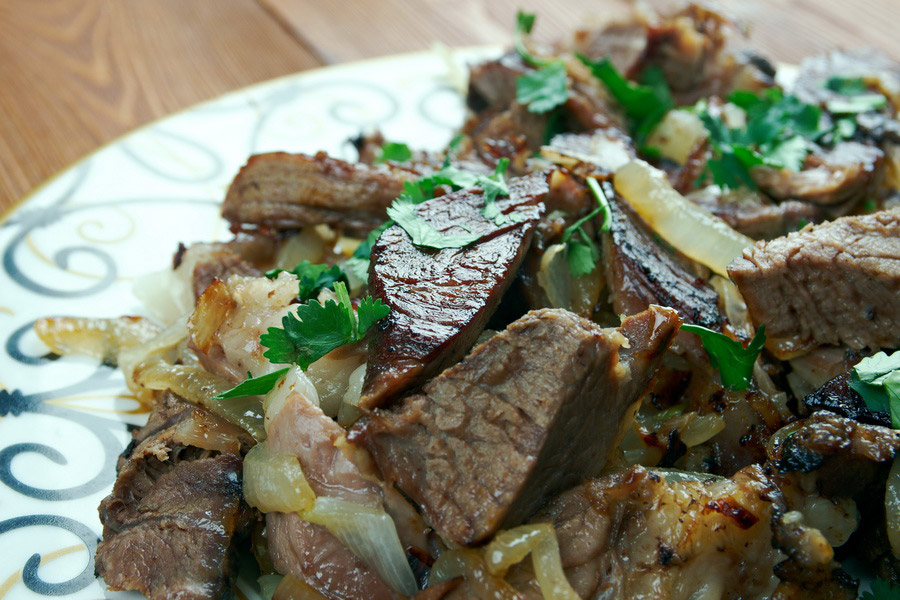 Tash-kordo (stone food) is one of the first known Kyrgyz dishes. To prepare this meal the meat of a young lamb was cooked over stones, an ordinary means of food preparation prior to the creation of ovens. Kyrgyz nomads would dig a hole 1-2 meters deep and overlay it with stones and wood to kindle a fire. Once the fire had burned out and coals appeared, the meat was rubbed with salt, placed in the washed stomach of a ram and covered with earth or skins and large leaves. Thanks to these natural “dishes”, the meat would not get dirty as it cooked for 5-6 hours. Today tash-kordo is made both in the oven and in traditional stone pits. (If the meat is cooked in a pit today, it is hung on special hooks instead of being placed in a ram’s stomach). Tash-kordo remains a delicacy in Kyrgyzstan. 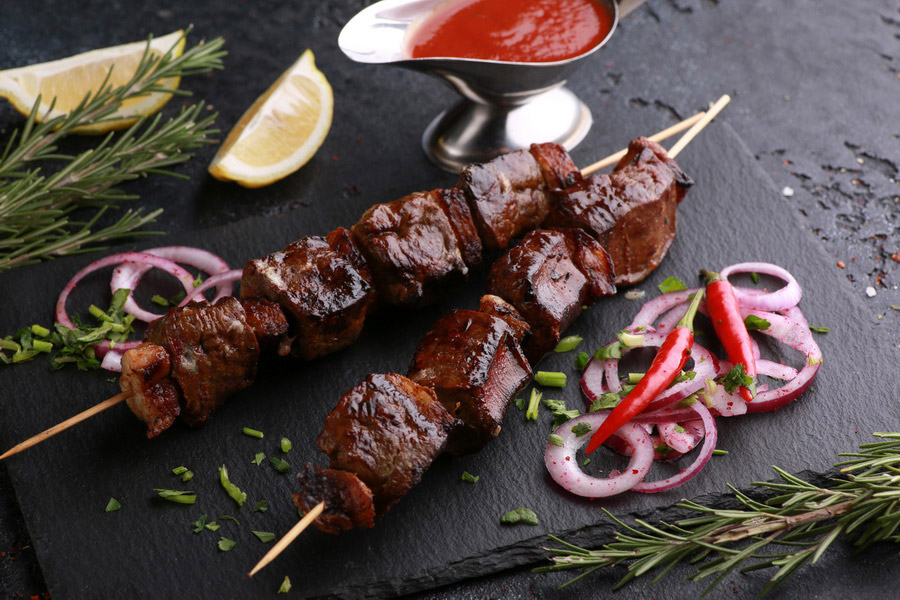 Shishkebek is essentially Kyrgyz liver shish kebab. The first mention of this dish is found in the Orkhon-Yenisei writings of the 5th-8th centuries. Today shishkebek is made by marinating the meat of young animals (rather than liver) in onions, and the more onions the juicier the kebabs! The most delicious variety of shishkebek is obtained by frying the meat on grape or raspberry twigs. If no such firewood is available then oak, linden, apple, cherry or apricot twigs are used. The only type of firewood that cannot be used is conifer branches, since spruce, fir and pine give the meat an unpleasant taste. Shishkebek should be turned frequently while cooking. Once ready, the kebabs are served with vinegar, onions and salad.

The Kyrgyz dish maksym is sometimes called "liquid bread", for it is really a drink which quenches both hunger and thirst. Maksym is made from water, flour, sourdough, salt and crushed cereals such as wheat, millet, corn and barley. The end product is gray-brown with a pleasant smell of roasted grain. There are many techniques for making maksym, so in every city and home the taste will be unique. Oats are put into hot water, salted and brought to a boil while being stirred constantly. Once the mixture has cooled slightly it is poured into a bowl with sourdough and flour and stored in a cool place for 8-10 hours. Maksym is one of the healthiest traditional Kyrgyz dishes which everyone should try: it contains vitamins B1, B2, B3 (niacin) and vitamin C (ascorbic acid). The B vitamins improve the nervous system and vision; niacin is known to reduce cholesterol levels; and vitamin C strengthens blood vessels and increases blood clotting. Maksym should be stirred well before serving. 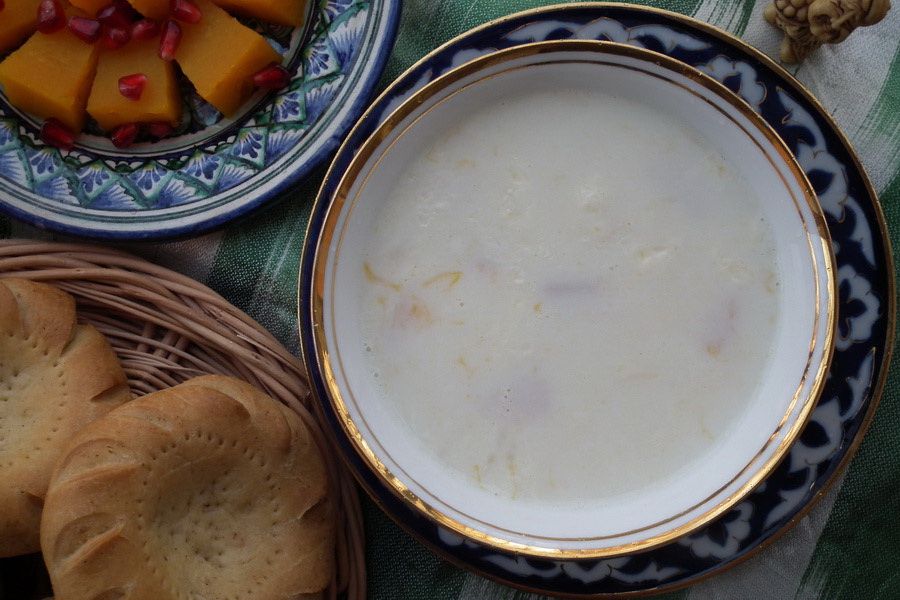 Kyrgyz cuisine is replete not only with red meats and grains but also with milk products. There are many dairy dishes in the country, most of which can also be found in neighboring countries. But there is one truly unique milk soup in Kyrgyzstan - shurugan. The recipe is very simple: fry onions in ghee until they are golden brown, pour in the milk, add salt, bring to a boil and cook for 10-15 minutes. In winter onions are used for the dish, while in the warm seasons fresh greens are more common. To serve shurugan, the bottom of a bowl or plate is covered with small pieces of flatbread and the shurugan is poured on top. 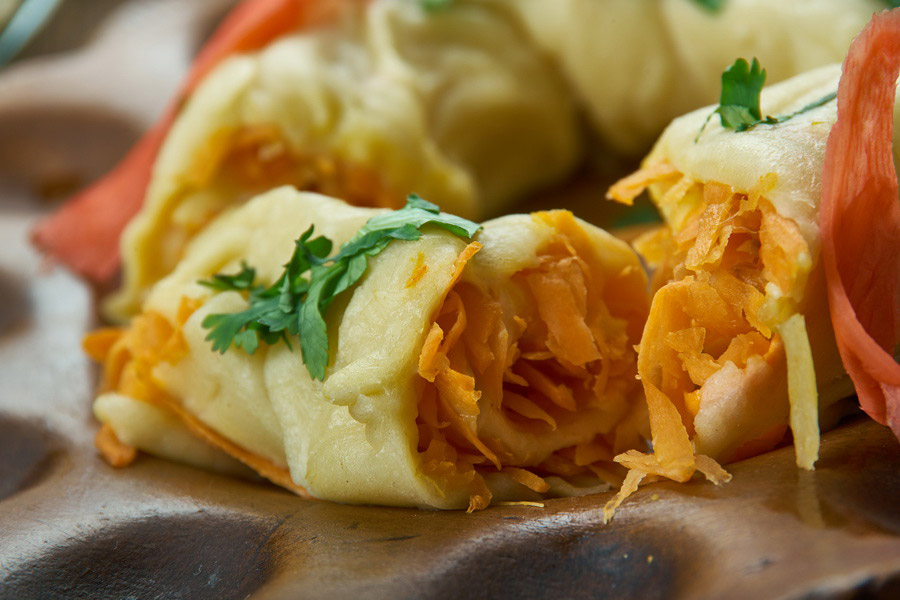 The secret for delicious oromo, one of the most traditional Kyrgyz dishes to try, lies in its thin, delicate dough. The dough is rolled out into a thin layer and topped with a filling before being formed into a spiral and steamed. The question of which filling is best for Kyrgyz oromo remains a topic of much debate. Some people prefer potatoes with onions while others swear by minced meat and onions. Some chefs have now resorted to preparing oromo with meat, potatoes and onions to reconcile the parties, and this filling seems to be the tastiest of all! Oromo made with carrots or seasonal pumpkin can also be found. 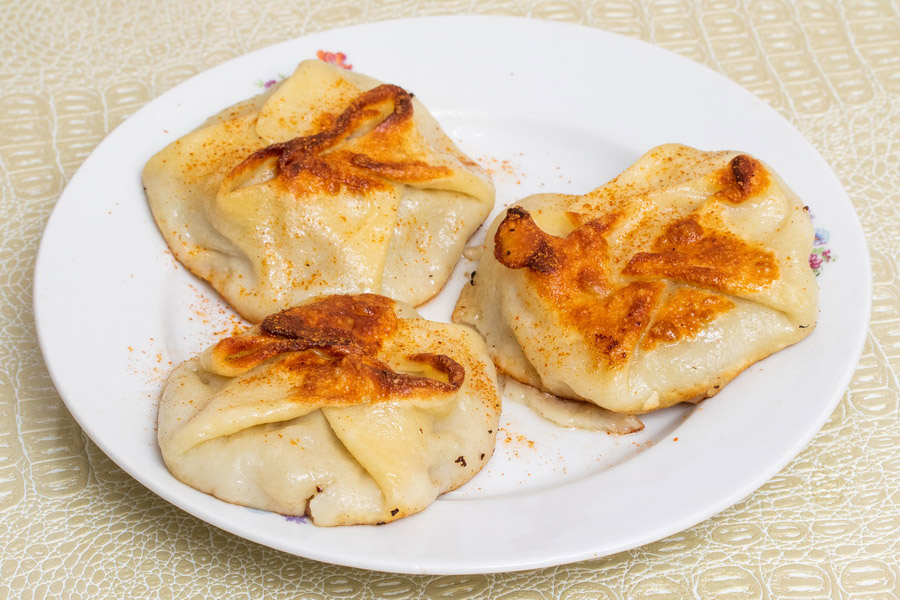 Hoshany are minced meat pies which arrived to Kyrgyzstan from Uyghur cuisine. The dough - which may be either unleavened or made with yeast - is cut into small pieces and rolled out. The centers are filled with a mixture of chopped lamb or beef, onions, spices and sometimes fat. Each piece is then folded at the edges in the same manner as manty dumplings, but unlike manty they are deep-fried until golden brown. Hoshany are served with fermented milk drinks and lazy (lazjan), a spicy seasoning of pepper and oil.

Kattama is a Kyrgyz bread which resembles soft, flaky tortillas covered in a crispy crust. It is believed that the kattama recipe is about 800 years old, having been invented in China in the 13th century. Some Kyrgyz make it from unleavened dough, but in our opinion kattama made from yeast dough tastes better. The dough should be rolled out until thin. Fried onions are then added before the dough is rolled into a spiral, rolled out again and finally fried in oil. If these flaky cakes are served to guests before the main course, there is a good chance that the guests will happily fill up on kattama before the hot food arrives! 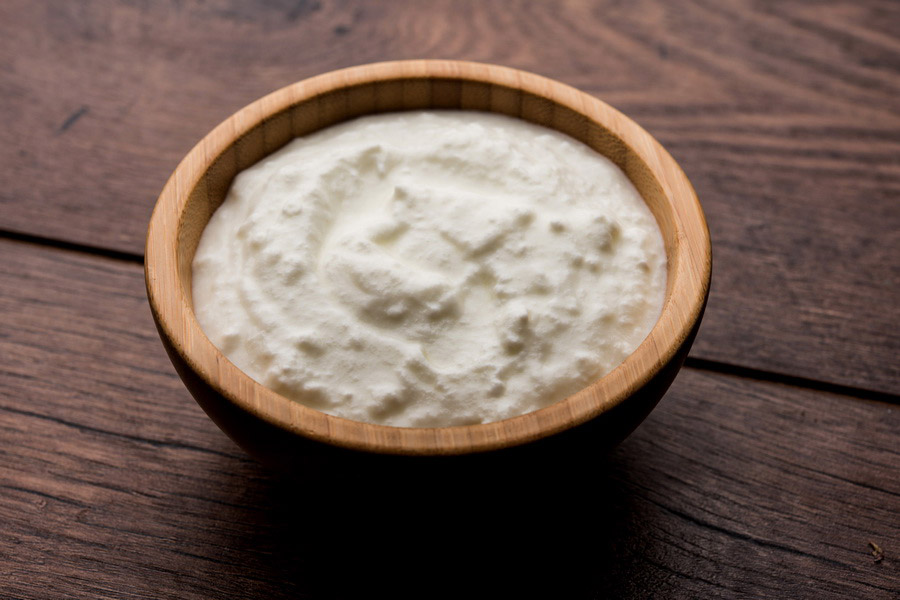 Zhuurat is a Kyrgyz yogurt made from sheep or goat milk. To prepare it, boiled milk is cooled to room temperature before yeast is added. The milk is then covered and set in a warm, dry place for several hours. Older generations of Kyrgyz love to eat zhuurat and other Kyrgyz dairy products with fried boorsok or flatbread, while younger people prefer to add fruit and berries to their yogurt.

Rounding up our list of 10 Kyrgyz dishes you have to try is jansak, a Kyrgyz dessert which has been enjoyed in the country for centuries. Jansak contains ghee, nuts and a lot of honey. If the nuts are large, they should first be crushed. The ghee for zhansak is poured into a dry, cold frying pan and heated over a high flame until a little smoke appears. (As a rule, the ghee should not be brought to a boil). The hot oil is poured into a dry dish. First the nuts and then the honey are added to the ghee, which is stirred well after both additions. Individual candies are then formed and left to sit until they have fully solidified.

Most of these recommended traditional Kyrgyz dishes to try can be prepared at home by adventurous chefs, although many are quite time-consuming. Ideally you can come to Central Asia to taste each food as prepared by a seasoned chef and then return home to try out your favorite recipes on family and friends!