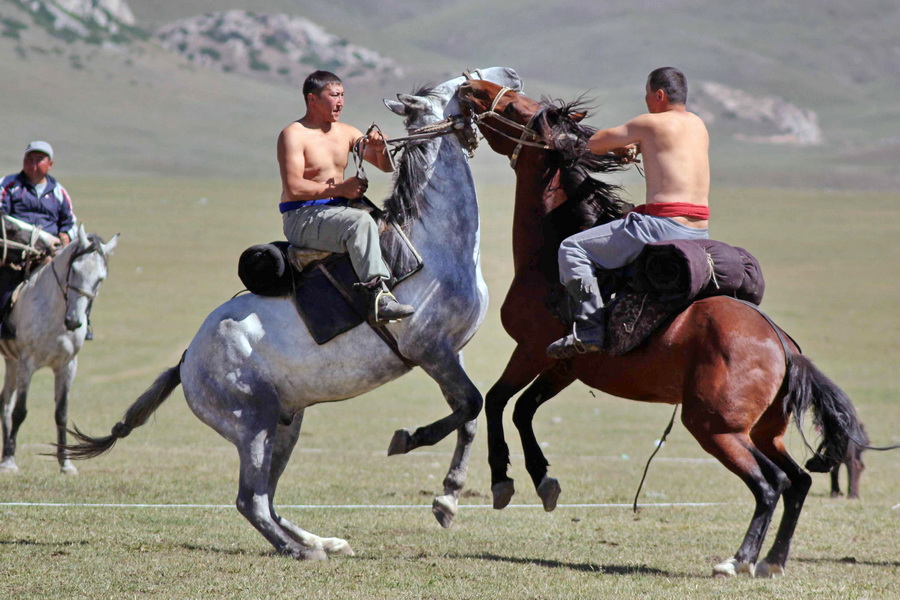 Kok-Boru is the highlight of any traditional sporting event in Central Asia. Two teams of eight horsemen fight for possession of a dead sheep or goat, which they then maneuver into raised goals to earn points. Gameplay is exciting and often violent, which makes it popular across the region. Visitors can find games both at large sporting events and out in the mountains, especially around holidays such as Nooruz. Kok-boru builds teamwork among players and toughens both men and horses, which would have been necessary for hunting and war.

The game starts with the teams lining up at the edge of the field. They then approach the middle of the field, where the referee has places the sheep or goat on the ground. Players must then fight to grab the sheep off the ground and carry it to their team’s goal, while the other team tries to gain possession of the sheep by force. With eight riders from each team on the field at any time, this means that there is plenty of action, and spectators often cheer loudly for their favorite teams.

Kok-boru matches drew the largest crowds at the 2016 World Nomad Games, with the final, between Kyrgyzstan and Kazakhstan, filling the Hippodrome in Cholpon-Ata so that it was overflowing. Even though the team of cowboys competing from America had never played a match before.

Er enish is a game where a horseman tries to pull his opponent from his horse so he touches the ground. The riders are shirtless, and wear special belts and scarves on their heads. When the referee calls the beginning of the match, the opponents grab each other with the aim of pulling the other from his horse. Winning requires not only strength, but also dexterity and endurance from the rider and the horse. These are valuable skills for men and horses, and so er enish competitions were valuable ways of helping men hone their abilities.