The Altai Mountains, while located primarily in eastern Russia, span a huge stretch of land and can be categorized according to country: the Chinese Altai, Altai Mongolia, Altai Mountains in Kazakhstan and the Altai-Sayan Mountains that lie at the convergence of Russia, China, Kazakhstan and Mongolia. Russia tourism, in particular, has been attracting a growing number of travelers to this remote and glorious range.

Each year thousands of travelers go on tours to Altai, yet very few visitors realize why they frequently see cloth ribbons tied to trees in the area. Some tourists even begin to imitate this ritual thoughtlessly, upsetting the locals with their ignorance and disregard for this revered tradition. We therefore advise you to learn about this custom before joining one of the many available Altai tours. Dyalama amulet-ribbons are significant and sacred for many Altaian people, and understanding their use will enable you to show consideration for this people and their homeland.

Altaians feel a close connection to nature and they will often pay careful attention to the Altai Mountains’ weather, ecology and environ. Since ancient times the elements of earth, air, fire and water have been deified and considered central forces for life on earth. Each natural object is believed to be endowed with a special spirit, and the whole world divided into three tiers:

If you ask an Altaian who he worships, you will hear: "Altai, trees, nature, stone". Locals believe in the Master of Altai, often referred to as Altaydin or Eezi, who is the giver and destroyer of life in these regions. His home is the Altai Mountains’ highest peak, known locally as the Three-Headed Mountain (Belukha Mountain), and his appearance like that of an old man in white robes. As a sign of admiration for the Altai Master, local residents tie white ribbons at various passes and springs. 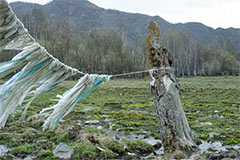 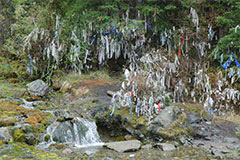 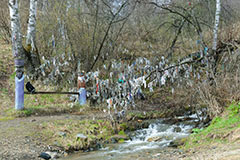 Each year, Russia tourism attracts thousands of visitors to Altai who tie handkerchiefs, t-shirts and even socks to trees and bushes. Many tourists believe that the dyalama equates to a good luck charm for happiness, but such an interpretation is fundamentally wrong. Dyalama, also known as kyira depending on the location, is an appeal in the form of ribbon-tying to one of the many spirits that dwell in rivers, forests, mountains or springs. Those who do not adhere to the spiritual beliefs of the Altai should thus refrain from imitating this practice.

However, it is not necessary to adhere to local religious teachings in order to observe this ancient ritual of Altai being performed. To better understand the complexities involved in this rite, consider several mandatory rules that should be followed when tying a dyalama ribbon:

Such rites themselves have long been integral to the Altai people and their homeland. Guests and tourists should remember that it is forbidden to swear, shout or talk loudly during the ceremony, as doing so can negatively affect the area’s spiritual climate. The Altai Mountains are believed to be filled with spirits, so even if you were only a spectator of such a ceremony, Altaians believe that you should turn to Altaidyn Eezi and nature with wishes for peace, balance and happiness.

Altaians believe that when visiting someone else's village, guests are required to respect the traditions of their hosts, and such respect can be extended to the Altaians at their places of power, cultural attractions and health resorts (which remain open to the public) while participating in Altai tours. Dyalama amulet-ribbons and the traditions bound to them can provide an eye-opening opportunity for greater understanding of the deep-seated beliefs of the Altai people. The beliefs interwoven into Altai culture are truly unique and fascinating, and showing respect for the peoples’ deeply entrenched values is an important facet of any Altai tour.